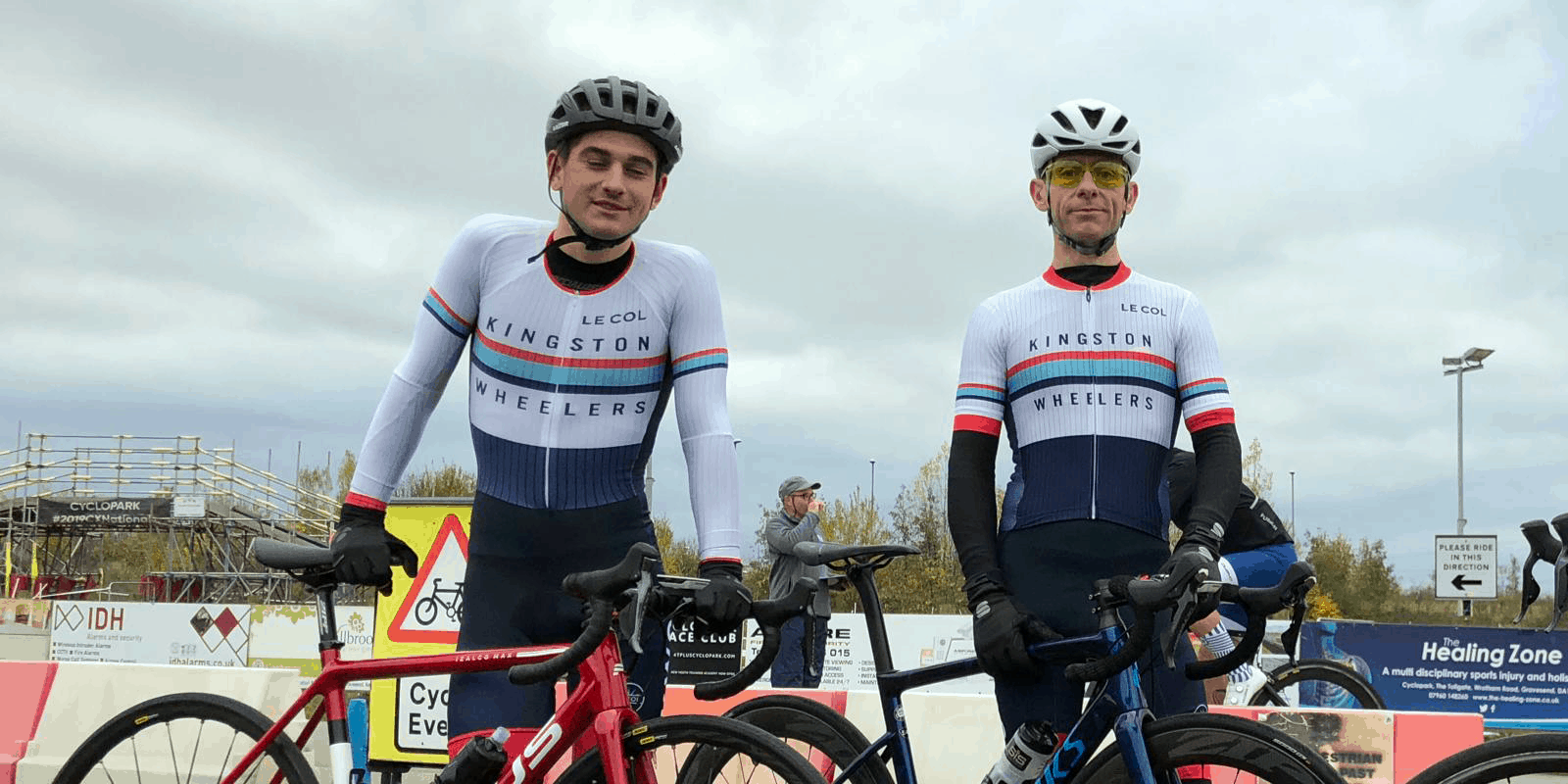 1-2 for Brendan and Ben at Hillingdon

Our Club Championships in October saw several new racers taking part, many of whom are now on a mission to make it to 3rd cat. Brendan Barnes reports back on a winter crit at Hillingdon, which saw himself and Ben Budgen take the top steps of the podium.

The pressure was on. It was 30th November, the last day of the 2019 season on which myself and Ben could grab the points needed to move up to Cat 3 for the start of the 2020 season.

Having caught the racing bug at the 2019 club champs, we had picked up a few points in a couple of 2/3/4 crits at Cyclopark. We now needed at least a 5th and 6th place respectively to get the all-important 12 points and move up to Cat 3.

We had done our homework on the field and thought it was doable, but were nervous as our only experience of Hillingdon was the club champs a few weeks before. Nerves increased on arrival when we discovered everyone was going the ‘wrong’ way around. Club champs went anti-clockwise, the race was going clockwise!

During the traditional car park strategy chat, we cooked up a plan: Push hard from the start, try and force a break, work together to put pressure on others in the break, try and hang on, don’t crash, see what happens at the line.

The E/1/2 guys went off a few seconds in front, then the 4ths rolled out. We got on the front pretty quick and hit a fairly strong tempo pace for 2-3 laps to try and size things up. I dropped back to mid-pack for half a lap, ready to put in an attack on the uphill section just before the bends. Ben followed with about half the field in tow.

After a few more similar attacks things were looking good and we got in a 4-up break. Everyone worked together well to try and put some distance into the group behind. We knew we would need to put pressure on the other two in the breakaway, so once we were clear we started pushing just after the other two riders had done a turn. The elastic snapped for one rider in the break and we were down to three. After a couple more well timed attacks, Ben and Brendan broke clear with about 10-12 minutes to go.

Smelling a nice 1-2, we gritted our teeth, got our heads down and pushed for the line. Taking regular turns every 30-60 seconds kept the pace high to guard against anyone jumping across in the last few laps. As the last lap approached, the bunch came into view and, with the target in sight, we managed to catch the bunch with about half a lap to go.

In the last 300m Brendan was on the front and there was a bit of traffic around with everyone from the bunch. Everyone emptied the tank to get across the line and Brendan managed to hold on for the win, Ben just a few feet behind.

It was fantastic to get a 1-2 for the club and move up to Cat 3 ready for 2020. Also very satisfying working out a team plan and seeing it through together!