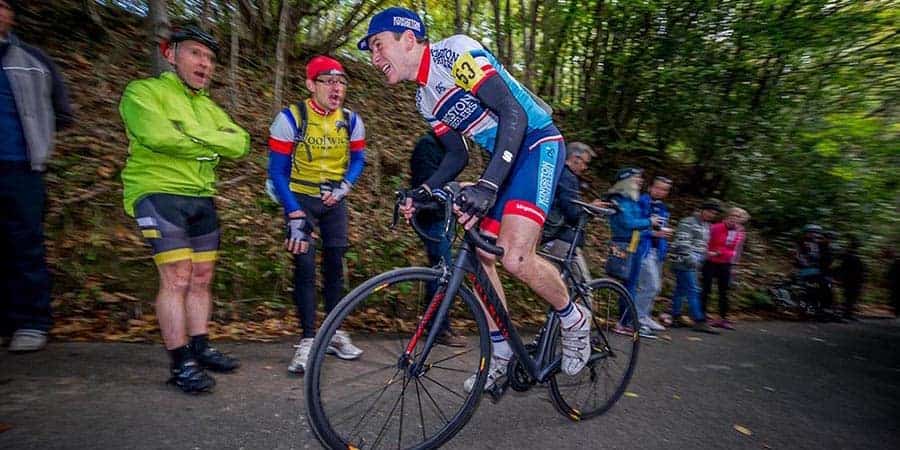 Ben Speller reports back from the Kent double header…

Sunday 11th October 2015
I’ve been itching to give these two events a go for a while; they are so well known and I’d seen pictures of the climbs crowded with spectators and heard about the amazing atmosphere so I finally got myself organised and signed up.
Having not done nearly as many miles on the bike as I’d have liked in September for various reasons, and also due to really struggling at the Denbies Duels HC I was questioning the reasoning behind that decision as I set off on the Sunday morning from home. Missing my train from Redhill to Edenbridge didn’t help either and I ended up taking a cab the rest of the way to York’s Hill for the Catford event. It was beautiful crisp sunny morning at least and I was in a philosophical mood about the whole thing, deciding to just try to enjoy the atmosphere and not worry too much about the times (yeah right, who am I trying to kid!)
The only other Wheeler signed up was Harry Bunnell (which is a shame, more next year please!) who I bumped into at the top of the course, I also managed to get some useful tips from Maryka about the hill which I’d never ridden before. Joe Thom also appeared before long, having walked part way there due to an outbreak of punctures en route.
Once signed on, I rolled down to the bottom of the hill and had a bit of a warm-up on the flatter section before the start line. At 10:23 was off up the hill, I actually felt OK on the bike, but my heart rate went up pretty quickly to just about max which made me back off a bit, hearing Maryka’s words in my head about resisting the temptation to smash up the steep ramp half way up the hill.
One oddly clear recollection was someone shouting at me at about half way that my pace was good, which really helped keep me pushing as I felt like I was barely moving for some reason. Then suddenly I was on the last corner and destroying myself (complete with growling noises) up the final ramp to the finish with what must have been close to a couple of hundred people clapping and cheering me on.
I had been hoping to go a bit under 3 mins, so when I looked at my Garmin an it said 2:26 I thought it must be wrong. however a quick look at the board confirmed my official time was 2:25.2 which I was pretty surprised and very pleased with. That gave me an overall placing of 45th out of 122 starters. 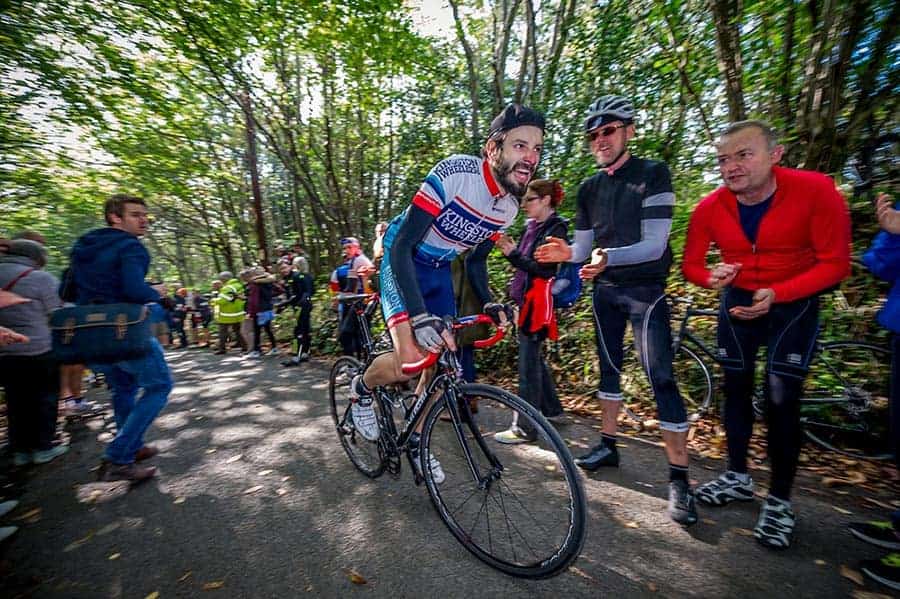 I went back to the final ramp of the hill to cheer on Harry who started a bit after me, he looked to be going well as he came up the final steep section, recording a strong time of 2:32 and taking 54th overall.
After a bit more of a chat and a cup of coffee I cycled over to White Hill for the Bec Hill Climb. The hill is of a similar length and gradient, but generally thought to be easier than York’s hill.
I had a pretty early start as I was a reserve so made my way to the start line after grabbing some more coffee and a bit of cake. I found warming up there tricky without tiring your legs as everything close to the start is steep, although I did discover a little lane I may try to use next year. It was busy with residents on this occasion however and I didn’t want to annoy them and risk causing Bec CC problems; it sounds like they had enough of a struggle getting it staged as it was.
I set off and was soon feeling decidedly less lively than Catford, so just ground my way up the climb as best I could. The spectators were mostly gathered at the really steep section (again it was really crowded and noisy) which I think hits 18% at one point, and whilst this was actually less than the 20% that York’s Hill gets up to, certainly felt steeper! I really had to fight to keep my momentum and rolled over the line feeling fried and expecting a slow time. On checking the board I found out it was actually a 2:28, which I was pretty happy with and got me 58th out of 110 overall.
I stuck around and had good giggle with a few of the Paceline lads by the finish line whilst watching the rest of the field finish, before heading home feeling like it was a decent end to a really enjoyable season for me.
Both events were really nicely put on, and the size and enthusiasm of the crowds were fantastic. I had a good chat with Garry who organises the Bec event, and asked me to pass on thanks for the donation received from our club for the crowd funding to get the event off the ground, and I promised him I’d do my best to get a team of Kingston Wheelers out for next year’s event. It’s great riding both Catford and Bec on the same day, so all you lovers of short sharp climbs, please make a note in your diaries now!
Even if you don’t want to compete, I’d recommend getting along to watch if you can. It’s a great atmosphere, everyone was really friendly and the ride there and back takes you through some beautiful countryside.