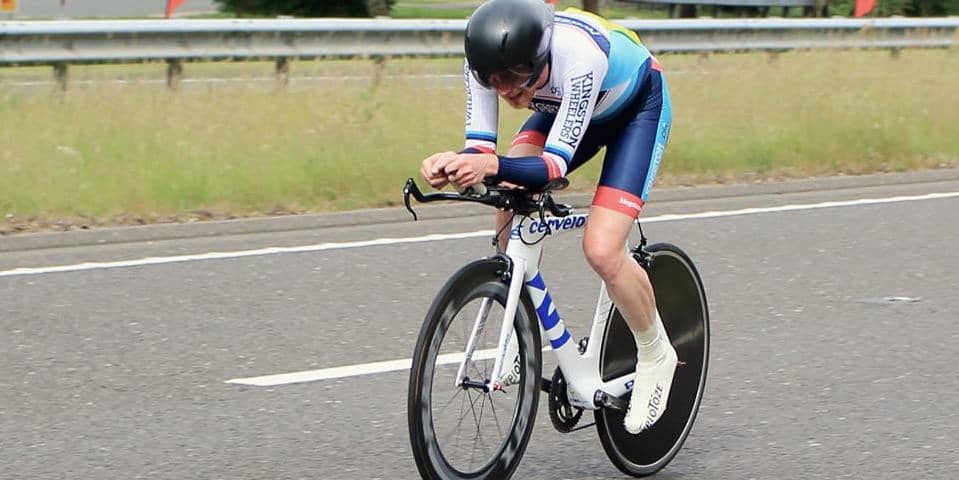 On Saturday 11th June club member Neil Grunshaw entered the Team Axiom 10 time trial on course P881 in Liss, Hampshire. Would this be the day he would finally go sub-20 minutes on a 10 mile course…
In time-trialling it’s all about going fast. That’s a given. Obviously. However, the true attraction for many is finding ways to go that little bit faster. Naturally there’s the fundamental of putting the training miles in, but you begin to obsess over ways to squeeze out that tiny bit of extra speed. This can come from position tweaks, choice of skinsuit, bike upgrades, pacing strategies, eating tons of beetroot, shaving your arms or even shoving tissues with Olbas oil up your nose – it’s a complex, ridiculous but hugely rewarding business.
Last season, my PB for a ’10’ was 20:51. This was gained in decent conditions on one of the faster courses locally – the P881 on the A3 near Liss, Hampshire. After I’d broken the 21 minute barrier, I started to dream about the possibility of bagging a ’19’. On the right course, on the right day – I thought it could be done. A winter of solid training followed, and numerous self-bike-fit sessions. My wife thought I was going nuts. I would disappear off to the spare room to film myself on the turbo cranking out the watts, then analyze the footage, looking for gains. There was much fettling. I also organised the purchase of some fancy new super-aero KW skinsuits, and acquired an 82mm front wheel. Early season races suggested I was coming into form. The signs were good.
I was convinced I needed to ride the F11/10 near Tring to have a chance of breaking 20 mins. There’s a hill in the middle that you don’t have to ride back up. It’s one of the fastest courses in the country and has the added advantage of not being in Hull like the V718, famous for sub 18 minute rides from the likes of Bradley Wiggins and Alex Dowsett. My entry was accepted for the Bossard Wheelers 10 on F11/10 in May, so I ate my beetroot and headed off to the HQ at time trial o’clock (usually this is around 5am). Conditions looked good on the day. Not perfect, but warm and little wind.
I paced it well until the last mile, which was slightly uphill and into a light headwind. There I died a thousand deaths trying to punch through the air to the finish, but looking at my Garmin as I crossed the line, the time read ’19:57′. I’d done it! I giddily made my way back to the HQ. In true UK TT style, the HQ was a local primary school with trestle tables piled high with lemon drizzle cakes. It’s a charming contrast – thousands of pounds worth of bleeding-edge aerodynamic super-bikes dotted round the edge of an assembly hall decorated with finger paintings. I tip-tapped over to the results board in my cleats and my heart sank. Official time – 20:01. 2 miserable seconds. I was GUTTED. I didn’t even stay for any lemon drizzle cake. I took off my stupid rubber overshoes, put my stupid pointy hat back in the stupid pointy hat case and drove home listening to the Smiths. It was not to be.
I’d signed up for the Team Axiom 10 merely looking to beat my course PB back on the P881 at Liss. I thought I’d struggle to find 53 seconds, especially as I’d been putting out similar power to last August when I did 20:51. On the day, the weather looked touch-and-go. Fellow KW tester Henrik Persson was also on the start sheet. Henrik texted in the morning saying he was considering sacking it off due to the biblical rain that had just started over his house in Surrey. I thought I’d make a call later on. As it happened, the rain seemed to be holding off. Race on!
On arrival at the HQ (a quaint village hall in Liss this time), it was clear that it was going to be a fast day. Very warm, and virtually no wind. Henrik and I warmed up on our turbos in the train station car park, attracting strange looks from passing travellers. Who are these strangers riding bikes that go nowhere? Why are they squeezing into Lycra onesies? What the hell are those socks? We wished each other luck and went off to the start. Disaster struck for Henrik before he’d even set off – the zip failed on his skinsuit, forcing him to improvise by using his heart rate monitor strap to hold it closed. 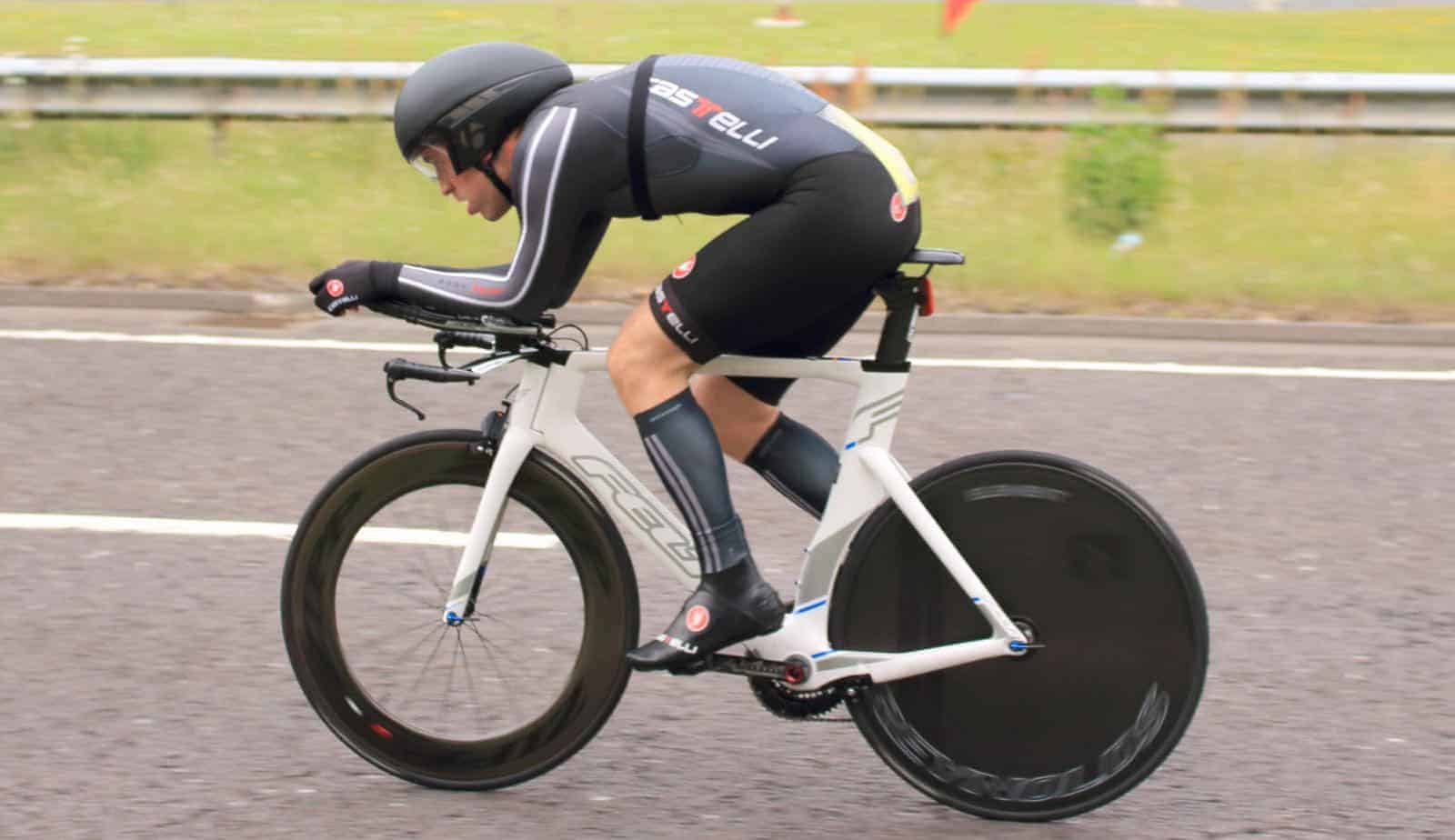 My turn came and I set off up the dual carriageway. The basic pacing plan was to go into the red on the ‘climbs’, knowing I could recover on the downhills. I was to ’empty the tank’ when I saw the army base on the left, knowing the last mile is all downhill to the finish. After the 180 degree turn at the 5 mile roundabout I put the power down, mentally focusing on the last flyover marking the start of the finishing mile. The bridge came into sight, but I was feeling cooked. The watts were dropping, and my heart rate was rising. I dug as deep as I could and managed to up the power until the road mercifully headed down. I crossed the line and glanced down at my Garmin – 19:55. Could it really be true? I wasn’t getting my hopes up this time.
I crawled back to the car park to find Henrik warming down. He said he’d definitely gone under 20 minutes. Chapeau! I reckon everyone will be wearing their HRM straps on the outside at the next race now, thinking Henrik has discovered some kind of devastating new aero gain. Look out for this innovative new tech at the Tour in July.
I still wasn’t getting my hopes up, however. Flyovers can disrupt a GPS signal, and you never know if the Garmin auto-started at the same time as the timekeeper’s watch.
We rode to the HQ, helped ourselves to some free jelly beans and scanned the results. 19:55 for Henrik, 19:58 for me – 8th and 9th respectively. I’d done it! I was over the moon, and was already thinking about drinking 19 pints to celebrate. The fast conditions were confirmed when 1st place came in – 18:49 for ex-Wheeler Rob Sharland, smashing Michael Hutchinson’s 15-year course record by 12 seconds. Honourable mentions go to fellow Wheeler Dave Spragg and daughter Astrid for winning the tandem prize with a time of 25:59.
Speaking of records, Henrik and I became only the 3rd and 4th Wheelers to ride a sub 20 minute ’10’ in the entire history of the club. Unfortunately, we have our work cut out if either of us wants to go for the all-time club record. Current holder is Steve Irwin with a time of 18:19, with Rob Sharland (him again) at number 2 with 18:46. So just another 139 seconds to find from somewhere, then. If I just shave off my beard, buy some new bars, book a session in a wind tunnel, up my daily beetroot intake, get some silk tubulars…