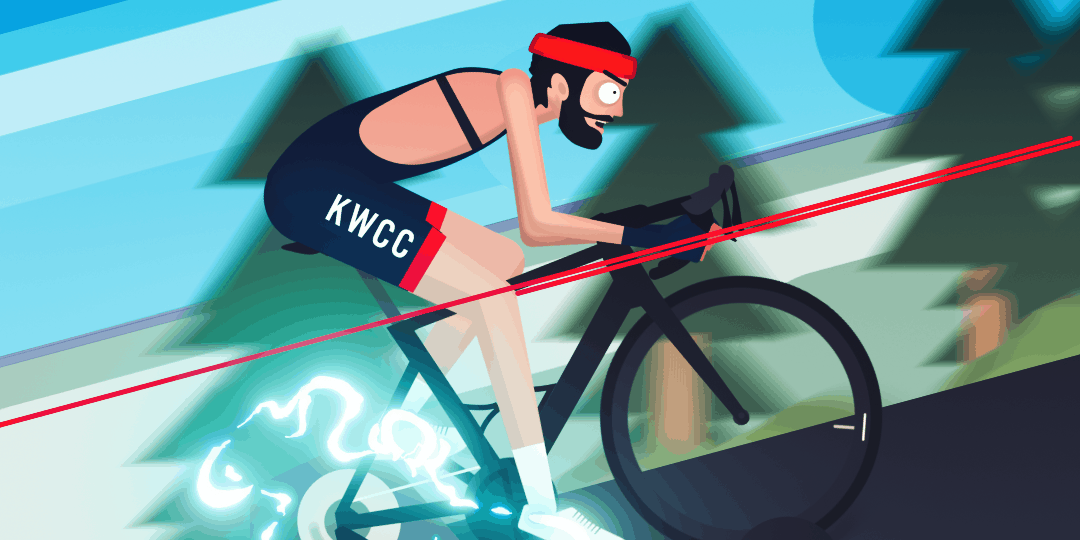 This weekend members of Kingston Wheelers Cycling Club jumped on their turbo trainers to raise money for staff at Kingston Hospital by tackling a virtual elevation challenge. With a huge turn out from 61 members, we obliterated our original aim of scaling the 43,316 metres of the Seven Summits, with a final elevation of 206,996 metres – 4.7 times our original target.

The event took place in support of Kingston Hospital Charity, which provides invaluable support services to NHS staff. We have seen an amazing response from the local community in Kingston and beyond, with donations totalling £12,000 after a week of fundraising. The money raised will contribute to the staff wellness centre which provides showers, beds, counselling services, and a new foodbank service that allows staff to pick up essential food and groceries during the lockdown period.

“I’ve only been on Zwift just under a month and knew nothing about vEverests until my clubmate Harry started nudging me with the idea last week. I’d read the Everest rules on Thursday in case I felt ok to carry on past 5,000 metres, but I didn’t make the call until my 6th ascent of the Alpe. I could see I was on pace to break the women’s vEverest record and when my coach gave me the go ahead, that was enough. My third wind came and I went into 12 TT hour mode topping 8,848 metres in just under 9 hours and 24 minutes. I’m so pleased with how much we’ve raised for Kingston hospital and with how many members got involved. The event was great fun – at times it was like being on a club ride, one of the things I’ve missed the most during lockdown.”

Gregg had started his ride at 6am and was planning to stop after two ascents of Ventoux. In the end he managed to spend over 13 hours on the turbo, clocking up a crazy five ascents of Mount Ventoux contributing 8,857 metres elevation;

“I had pledged two ascents of Ventoux and was hoping to manage a third. I had only got a turbo last week, so the idea of doing 7hrs was already a bit daunting. Things started great, the vertical meters ticked by and spirits were high. The Zoom chat proved to be a great distraction from the world of virtual climbing. I was about 3/4 up the third ascent and totally cracked. Cadence was in the fifties (RIP knees) and my head was bobbing. At that point I just wanted to crack open a cold beer and have a nice lie down, but thought to myself; “would that really be my max effort? Probably not.” So I had a banana, gave my sore right foot a bit of a rub and got on with it. By this point I knew Harry and Alice were going for an Everesting and – having now done about 5,000m myself – thought I might as well have it a crack too. We were getting regular updates on donations, which had gone through the roof! The fact that so many people had contributed was a big motivation and I wanted to repay that by giving it my biggest effort. The last 6hrs were a total grind and I wouldn’t have made 8,848m without the incredible support.”

We had 10 members clock up over 5,000 metres with their rides, including ultra rider Jasmijn Muller who took on three ascents of Ventoux totalling 5,360 metres in a super quick time, grabbing several QOMs in the process.

It was great to see lots of new members getting stuck in. Shout out to Ben, Moira, Eimear, Natalie and Mags who all clocked up over 3,000 metres each. For new joiner Eimear the elevation challenge was only her second ride with the club;

“It was one of my best days in lockdown, despite what my legs say. I couldn’t believe how welcoming and inclusive everyone was when we rocked up at a chilled 10am into the video group, many of the others had already been climbing for hours at that point! The support on the day from my new clubmates both through the cheering on Zoom and all the kudos I was sent from Zwift really kept me going when it started to hurt. So bizarrely I did pretty much the whole 3,250m with a smile on my face! Even more fun was finding a friendly KWCC wheel to pace me up the climbs more than once – the virtual assist was greatly appreciated! Being part of this challenge and able to do something positive to show support was the best possible use of a Saturday right now and thanks to the club for running this event to give back to our community.”

Mark Aldred celebrated his Birthday with a couple of ascents, and was gifted a tow on Fabian Cancellera’s wheel on the Alpe du Zwift for part of the climb, whilst other members were excited to spot Mark Cavendish out on his half Everest ride.

Massive thanks from everyone at Kingston Wheelers for all the support and generous donations. Kingston Hospital and its wonderful team of staff have looked after so many of us over the years and it means a lot to be able to give a little something back.