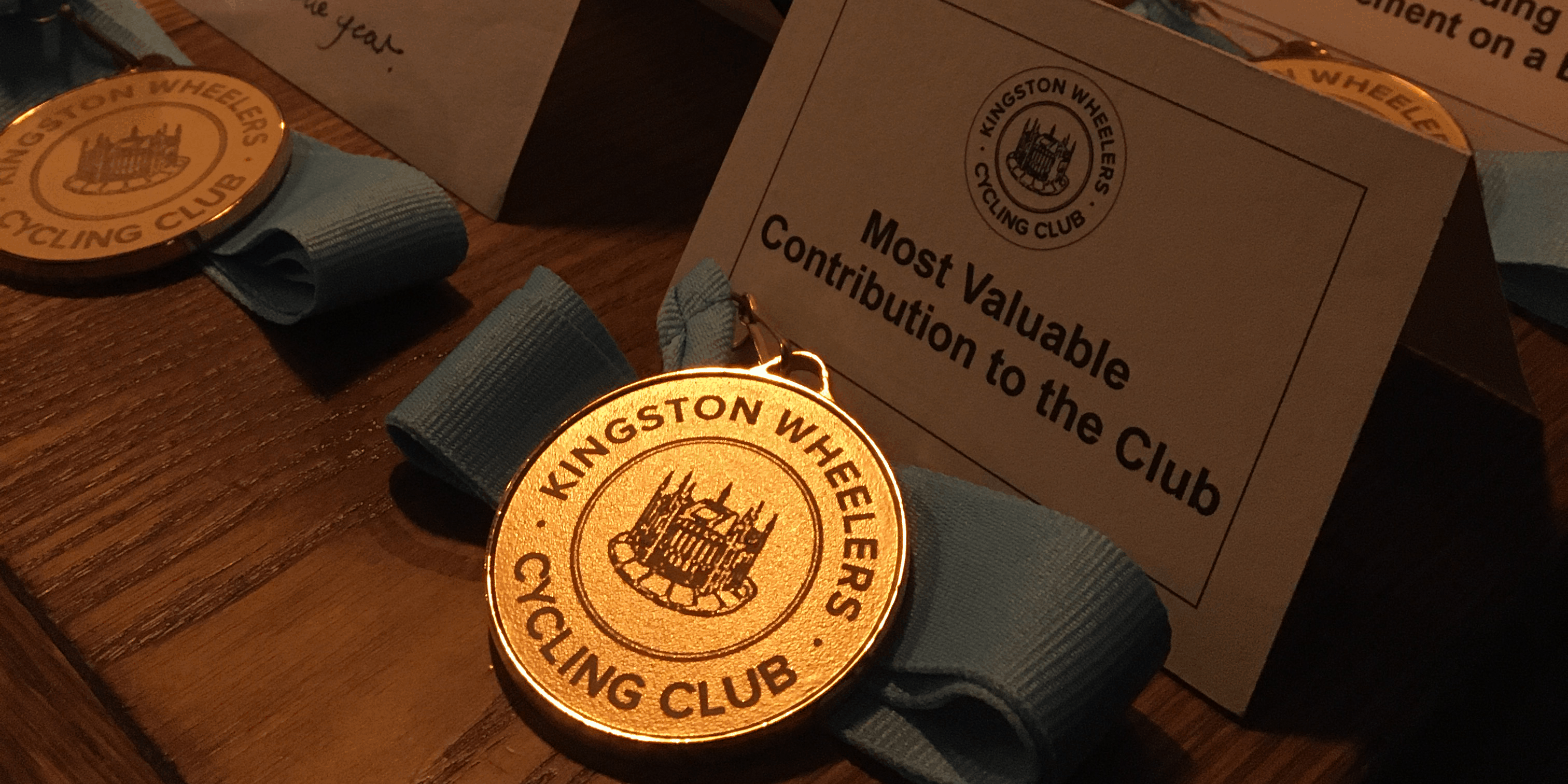 This weekend we hosted out annual club awards, a chance for members to get together and celebrate the achievements of the last year. The awards cover a range of disciplines from road racing to audax, as well as recognising members who have made an outstanding contribution to the club. Here’s a summary from the evening, which was expertly hosted by Caroline and Will.

It’s been another fantastic year for Kingston Wheelers, both on and off the bike. The club has taken a number of steps to move forward, we have a new website and brand new kit. And we’ve had people repping the kit and the club across a range of disciplines over the year. Last year we did a massive overhaul of the awards last year to make it more balanced for all the disciplines that this club represents.

Neil Grunshaw proved that being a father of two is no excuse not to crank out the “dad watts” and he set a new 10 mile PB of 19.30. Adam Bidwell had a phenomenal year and holds three club records as well as winning three opens and placed top 3 in two more. Henrik Persson had two podium finishes and Liam Smith lowered his PB for 10 mile by nearly a minute which is a massive improvement. Shaun King, Declan Egan, Mark Aldred and Jason Ashby won the Surrey League TTT Championship on road bikes. We also hosted another brilliant series of club 10 TTs on Wednesday nights, our thanks goes to Aidan for doing such an excellent job in running these. Shout out for winners of the KWCC organised 10 mile TTs; Andy Martin, Adam Bidwell, Jason Ashby, Jason Ashby and Ali Cigari (2 up), Adam Bidwell, Damien Sutton, Shaun King.

Jack Hartrey and Mark Aldred seemed to enter every hill climb going. Jack is now super strong on hills and the little blighter is now putting people to the sword (including his suffering dad) on the club runs when the road goes up. Mark qualified for the Nationals after loads of good results, finishing up 31st amongst a strong field.

We brought in a new prize last year for the Strava segment – 2018 winner Alex Reid selected Broomfield Hill in Richmond park. This year it’s the turn of the women’s winner top choose, so we asked Alice Lethbridge to announce the hill for this year… the Ranmore hairpin!

It was a big year for the racing team who have got stronger and stronger. We have a large number of Cat 2 racers and a growing group of Cat 3s. The season kicked off with a win for Declan Egan in January at Lee Valley. In May, Liam Smith moved up to Cat 3 in style by winning back to back races. And the season finished with a flourish at the end of the year with a 1-2 on the last day of the 2019 season, with Brendan and Ben both getting the points they needed to move up to Cat 3. They did it in style with a breakaway that lapped the field, with Brendan also crossing the line first in the sprint.

We had wins for: Declan Egan, Shaun King, Liam Smith, Rich Seabrook, Artur Kaczmarek, Kieran Presland and Brendan Barnes. A fantastic move into road racing saw Alice Lethbridge pick up multiple wins and points and she has now pick up a new team so we will be sad to see her leave the race squad in 2020.

Another very successful race at Bedfont Lakes, on a new course configuration that produced some of the closest and most exciting racing ever seen in the Central League, and was enjoyed by riders of all ages, from 4 to 72. We had members racing every week in both London and Wessex leagues, National Trophy races and the National Championships. Lots of newcomers (thanks in part to Matt Foote), and it was great to have several women racing for KWCC.

The Audax team has been doing a fantastic job over the last few years really developing the Audax chapter within KWCC. In 2018 the audax team ran their first Super Randonneur Series with four long distance rides: 200, 300, 400, and 600km. This was repeated in 2019, with more riders than ever taking part and a large Wheeler contingent. Going forward to 2020 there will be a new flagship ride to Land’s End and back – 1,000km in July, to be completed in 75 hours or less.

In 2019 we had several Wheelers complete Paris-Brest-Paris; Javier Arias Gonzalez, Sarah Perkins, Chris Tillapaugh, Richard Evans and David Willis, plus a special mention to Denise Griffin who finished outside the time cut but did a heroic ride to finish.

The Audax medal for members completing the KWCC audax series and joining the Super Randonneur hall of fame:

Track has continued to take off this year with training events at Herne Hill and Lee Valley Velodrome, which have built on similar events over the past few years. We are really getting an emerging group of riders on the track representing KWCC. A big thanks to Harry Bunnell and the team for organising the second Open Season at HHV which featured a number of Wheelers riding and will be running again this year in August.

Honourable mentions to Pete Hair who took top spot on the podium in the Bs for the Handicap sprint at our Open Season, Harry Bunnell who raced all summer at track league, taking several wins in the Bs, and Jason Ashby who moved into the As at HHV summer track league and held his own.

There was one stand out rider across the season, Adam Bidwell. He had a solid showing in the A category at LVV winter league, including a win in the points race. This was followed by a big summer on the track competing in the pursuit and scratch at the National Masters, and then the UCI World Masters at the Manchester Velodrome in October where he finished just outside the top 10 in the scratch and points.

This year we invited nominees for our two most prestigious awards, which are decided by the committee. Thanks to all those who put forward members as nominees, there were many great achievements in 2019.

Committee Member of the Year – Will Rostron

This award decided by our club president goes to one of the newer committee members who has headed up comms for the last two years. Will has been a great addition to the team and has worked tirelessly to deliver a website and forum for our members.

Adam has received this award for his performance over a number of years. He’s broken club TT records year on year, he’s current holder of three distances for the club and that’s mainly because he’s not stupid enough to do the longer distances or 12 hr TTs. He puts himself out there to help all club TTers and is a source of knowledge and support. On the track he has wins in the Cat A at Lee Valley winter league, followed by a big summer on the track competing in both pursuit and scratch at the National Masters and then the UCI World Masters at the Manchester Velodrome in Oct where he finished just outside the top ten in both.

Most Valuable Contribution To The Club – Matt Foote

This award recognises someone who not only gives to the club but the whole community and we had loads of people nominating this person from across KWCC. Matt gives massively to the community; he’s a British Cycling qualified coach who has coached at Kingston Junior Cycling Club for a number of years every Saturday during their season, rain or shine, helping young riders to develop their confidence on two wheels and a love for riding, some of whom go on to race. He’s a British Cycling level 2 coach and Assistant Commissaire at CX races.

On the CX front Matt is a key member of the organising team for the CX race, bringing expertise without which we would have struggled. He helped design the course over multiple site visits, produced all the mapping, and the risk assessment. He is a key facilitator for midweek training sessions at Old Deer Park where in the space of 30 mins he could teach someone a CX dismount and remount. He has a huge amount of energy for getting newbies into CX. Every time someone expresses an interest he sets up a coaching session specifically for them, teaches the basics in no time flat, and cajoles them into entering races.

Away from CX, Matt runs the newbie ride, and is friendly face for all new KWCC starters – the Newbie run is a huge contribution in itself. Matt’s actually been so busy with work, KJCC coaching and the newbie rides, that he’s only managed to do three CX races this season, but he’s still managed to make time for all the above.

Finally a big welcome to members who have joined us in the last twelve months and best of luck to all for the year ahead.