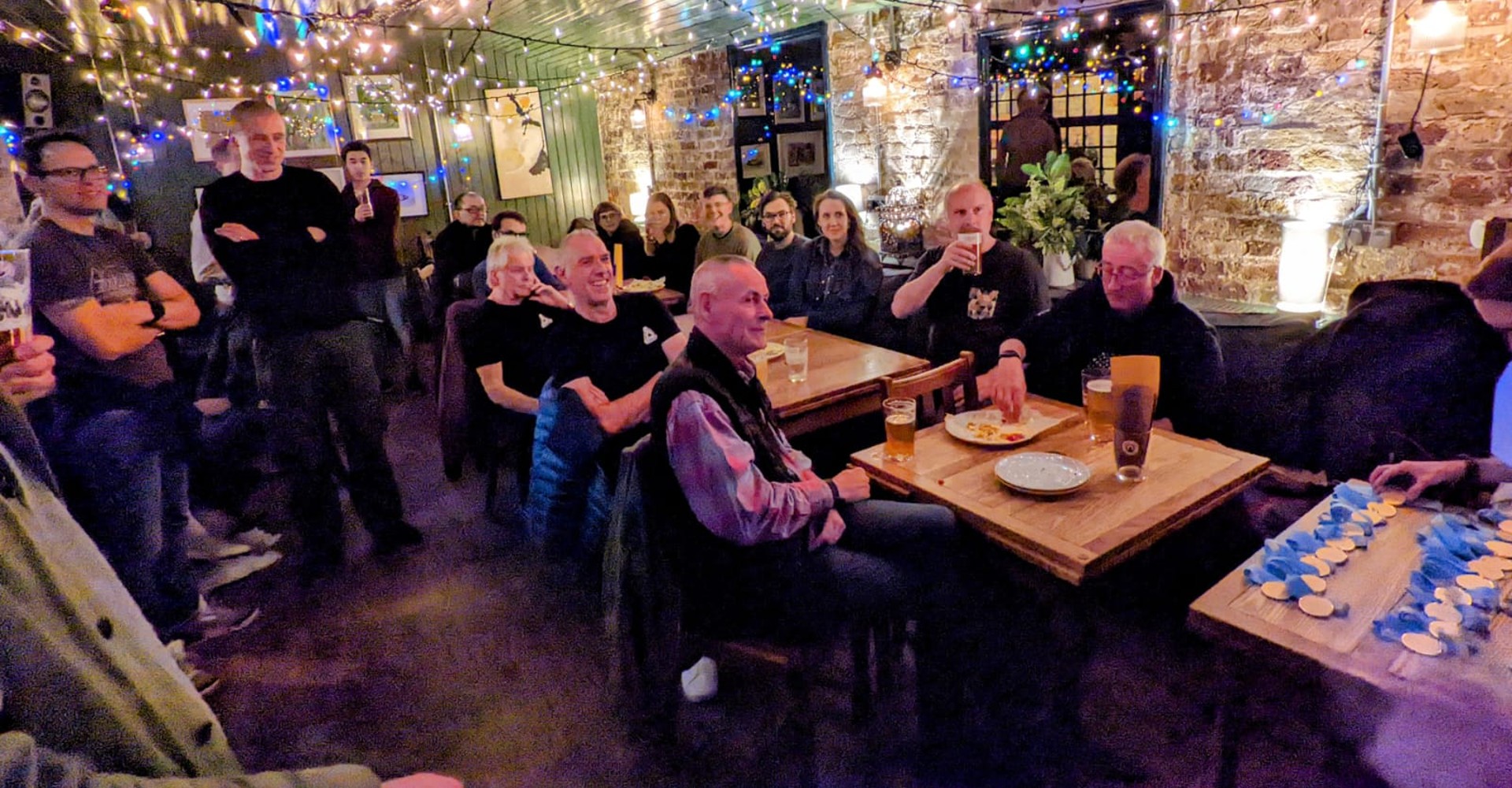 Club Awards: The Winners from 2021

The Club Awards night is our annual celebration of all the achievements of the previous year across all disciplines of the club. After a year out due to the pandemic, it was great to be back at the Norbiton pub to celebrate the great and the good of 2021.

Our first set of awards celebrates our members racing against the clock across various distances and formats.

Another of our prolific testers Henrik Persson set 303.17 miles for a 12 hour TT, breaking his own previous club record of 287.45 miles which he set in 2019. That will be one of his last races in KWCC colours as he joins Nopinz Motip Race Team this season. Good luck, Henrik, don’t forget us!

The Club TT Circuit Race Champion is the highest finisher at the East Surrey Hardriders 25 mile TT that takes place on the GS/491R course near Dorking. The winners this year were Mark Aldred and Jack Hartrey (highest placed junior). It would be great to have a women’s winner for this in next year’s awards.

Next up is the highest placed finishers at the Gill Jessop Memorial Sporting 14, our own time trial named after our former club president. The highest men’s finisher was Judah Rand, with Heather O’Mahoney quickest for the women, and Jack Hartrey winning his second medal of the evening for fastest junior.

After an honourable mention for Judah for his win at the Club 10, the final TT medals of the evening were awarded to Neil Grunshaw and Adam Bidwell (of course!) for taking the win in the Club 2-up competition.

2021 saw the return of the Club Championships, which proved very popular with plenty of Wheelers eager to race. The Go Ride (warm-up) race for riders new to racing was won by Luke Fenney, whilst Chris Carter won the men’s race from a two-man breakaway and Moira Brailsford went on a long-range solo attack to win the women’s race in empathic style.

The road points champion is awarded to the person who has scored the most British Cycling points in the course of the season, with Declan Egan accumulating a massive 138 points as the men’s winner and Antonia Foster clocking up 26 points as the women’s winner.

The final category is for most improved road rider, which celebrates members who have made a significant improvement over the course of a season. The women’s winner Jo Reynolds started riding during lockdown on her old mountain bike and was soon hooked. She bought a road bike, joined the club and within a year was racing the club champs, finishing third on the podium. Our men’s winner Dom Jackson also joined the club in 2020 and started racing last year, coming 2nd in his first race and then moving up to Cat 3 in just three races. Mega achievements from both!

Alex Joss was the highest points winner taking the women’s prize. She had a really impressive 21/22 season including a podium at Somerhill and 4th overall in the London league. Joss the Boss, chapeau!

Our audax awards celebrate the members who accumulate the most points with Audax UK over the course of a year. Richard Evans was our men’s winner with a total of 44 points and Sarah Perkins won the women’s prize with 27 points. Both of them covered some serious mileage last year.

The Kingston Wheelers Audax Chapter (KWAC) also presented a special award to Wheelers who have completed a Super Randonneur Series, riding a 200, 300, 400, 600 and/or 1000km event in the course of a season. Recipients of this prize were Harry Bunnell, Alistair Cook, and Kevin Denson.

Our men’s track champion for 2021 was Chris Carter, who rode both Lee Valley and Herne Hill Velodrome track league and had some great results in open meetings, gaining his Cat 2 licence with a 2nd place in the Devil at the VCL Open. Special mention to Declan Egan who won the Roadmans 25 mile scratch race, also at the VCL Open.

Heather Waterton takes the women’s prize after a strong showing at the Kingston Wheelers Open Season at Herne Hill Velodrome and encouraging other women at the club to have a go at the track. We’d love to see more Wheelers racing at Herne Hill this season!

Our Club Chair Tim Lawn awarded the Committee Member of the Year to Steph Horsfield for all her hard work behind the scenes running the club finances.

The final round of prizes were nominated by our membership.

Outstanding Achievement on a Bike went to Kevin Denson. Not only did he complete a Super Randonneur Series last year including the 1000km London-Land’s End-London ride, he rode 2300km across Morocco including off-road segments in the Sahara, and then he topped of the season with the Rapha Festive 500 in one ride at Herne Hill Velodrome. Epic stuff, Kevin.

Most Valuable Contribution to the Club was awarded to Chris Jenkins for amazing work over the years running the club kit and overseeing the introduction of a new design and new supplier with Le Col. He also did a massive amount of research on the club’s status, which was He is enjoying a well earned break and has handed over the kit management to Abby and Sam who will no doubt do a great job in his place.

Volunteer of the Year went to Tom Herbert, who has played a massive part in growing the club’s virtual community and running the annual Tour de Zwift club competition. Others nominated were Harry Bunnell for the fantastic work he does behind the scenes, Matt Kumar for running Richmond Park laps and Adam Bidwell for organising so many club events and mentoring new event organisers.

Well done to all the winners and here’s to a great year of riding in 2022.