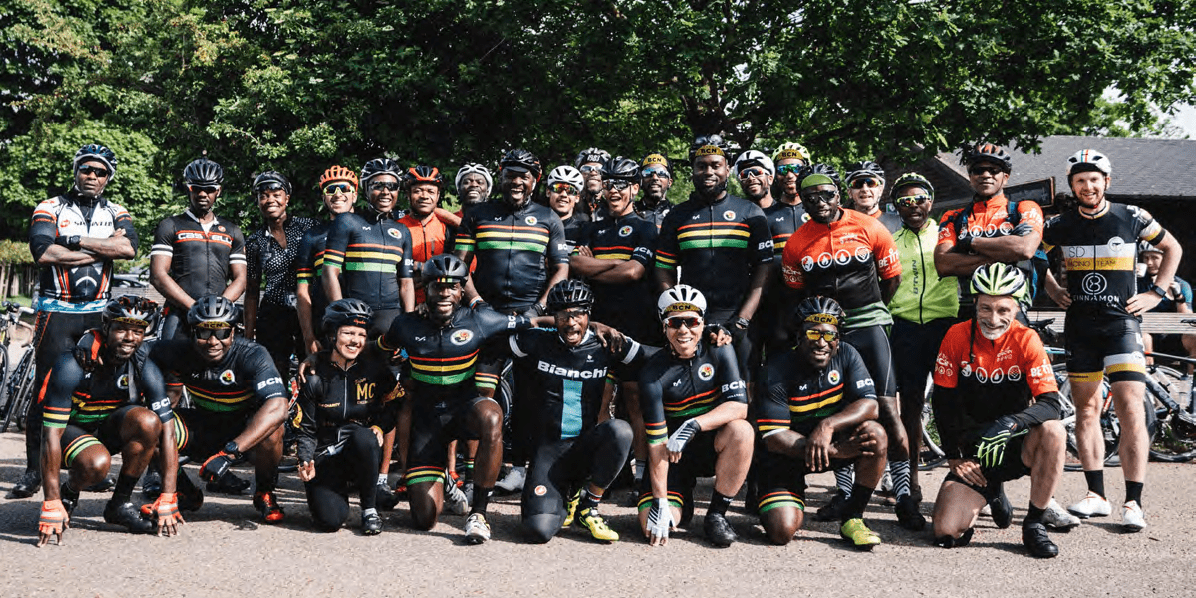 Diversity in Cycling – 12 months on

12 months on from publishing the Diversity in Cycling report in conjunction with British Cycling, author and member Andy Edwards reflects on the current landscape.

The death of George Floyd captured on video at the hands of police officers now charged with his murder has resulted in a global wave of protests, elevating the #BlackLivesMatter movement far more centrally into the public consciousness around the world. Perhaps the global Covid-19 pandemic and resulting lockdown has forced us all to focus on an uncomfortable truth. Black lives do not matter as much as white lives across pretty much every sphere of life including health, housing, education, career, recreation and sport. The UK government’s Race Disparity Audit makes that clear.

Cycling is a very white sport and Kingston Wheelers is no exception. To its credit, when the subject of diversity in the club was raised following the success of the Nigerian kit collection, the committee encouraged me to go and speak to a few cycling friends from black and minority backgrounds and put together a brief report.

What followed was a snowball in interest as black friends shared a Survey Monkey link with other black friends, Asian friends, Muslim friends and in a very short space of time we had over 60 responses, many in great detail recounting powerful and painful truths of their experiences as cyclists.

The report is intentionally intersectional. The most powerful voices were often those of black women whose lived experiences are the most intense, juggling racism and sexism every day of their lives. This quote stands out:

“Encountering stares when you turn up to a coffee spot can make it a highly uncomfortable atmosphere for a novice cyclist like myself. It feels like every move or faux pas receives extra scrutiny. And, I think this scrutiny is even stronger if you are a BAME female cyclist as you’re seen as even more of a curiosity. For example, I’ve been out with my white, middle aged cyclist work mates and I have received many stares and curious looks. All of which can be excruciatingly uncomfortable even when you are with friends.”

As momentum grew rapidly, it became apparent is that while it was one thing for me as a white man to write this kind of report for a cycling club, it is quite another to do so at a national and international level. That meant taking responsibility for its contents, but also collaborating extensively with black and Asian contributors all of whom commented on a succession of drafts and played an active role in shaping the final document. To paraphrase an African proverb,

It took a village to write the Diversity In Cycling report.

The most impactful advocate for the report was Chidi Onuoha. Chidi is a black British woman and a communications professional with a background in sport. She is part of British Cycling’s communications team and it was Chidi who got BC on board, taking the report to a much bigger audience.

Chidi is one the few black employees at British Cycling, in fact within the sport as a whole, and she also a woman in what is still a white male dominated sport. Together with Yewande and Biola, I learned more from black women than from anyone else because their lived experiences are far more intense. I made mistakes and continue to do so, but that is part of the learning process.

The past few weeks have been such an emotional time for any person of colour, but especially black women. What has become even more apparent are the mental health concerns for someone recounting the racism (and sexism) they encounter every single day of their lives, which is now in full view for those of us without that lived experience. Then dealing with the inevitable “devil’s advocate” and “what if” questions from (well meaning) white people, when all we need do is listen and accept what is being said.

This holds true for any person of colour, including: black men, Asian men and women, Muslim men and women. I have found that by paying attention to black women especially, I can better comprehend the range of experiences that exist within what we refer to as “BAME”.

Yewande posted this on her Instagram the other day. It is worth reprinting in full:

Where do we go from here? The recommendations in the report are all there, we should play our part in implementing them – and this is already happening – both within Kingston Wheelers and more broadly. That is the easy bit.

The most challenging bit – and without doubt the most critical – is that we must all understand is that the number of members we have from black and Asian backgrounds is still very low and that means it is essential members from these backgrounds feel supported. What does that mean?

“This moment should be very revealing to a lot of white people. A lot of racism is subtle but believe black people when they recognise it, listen to them and educate yourself to recognising it yourself.”

If, as a white person, you can recognize racism that means you can call it out yourself and better support black and Asian friends in what is still overwhelmingly a very white space. If we can achieve this, both within Kingston Wheelers and across the cycling community, we can help transform the sport of cycling.