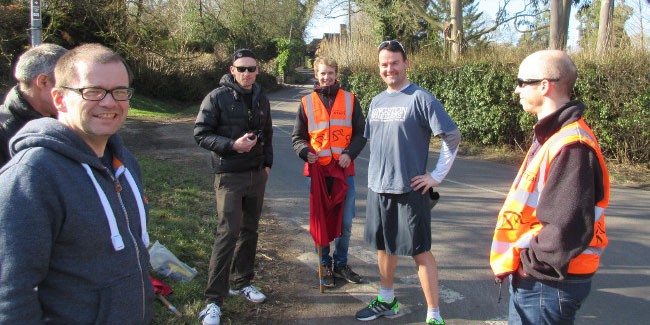 The Surrey league annual 2&3 Category, 3 day stage race will take place over the May bank holiday from the 2nd to the 4th of May 2015. Last year we had a team race and in the past our very own webmaster and committee member James Beaument won it in 2005. As with last year, Kingston Wheelers are hosting one of the stages, this time it will be the 1st stage on 2nd May 2015. The race will be starting at 10am and will take place on the Alfold & Dunsfold circuits over 69 miles. The race takes in 4 laps of the Alfold circuit for 50 miles, followed by 3 laps of Dunsfold circuit for the final 19 miles. The headquarters is at Alfold Crossways Village Hall, Dunsfold Road, Alfold, Surrey, GU6 8JB.
As always the Kingston Wheelers are proud to be hosting this event to support both racing for the cycling community and the Surrey League. We have been advertising for volunteers, so this is your chance to help and do your annual volunteering for the club. Most of the remaining roles to be filled are marshals, this is a straight forward role which is standing at junctions and make sure it is safe for both road users and racers as they come to junctions. The rest of the role requires shouting encouragement to the racers, for the Kingston Wheeler riders that bit louder! I’m sure closer to the time there will be a call for some homemade cakes, get your best recipes out ready all you keen bakers! Please put your name down on the forum or contact Marc H, Phil B or the usual KW contact as soon as possible to help the club host the event.

Our current forum is very old… it has been up and running since 2005 and has over 150,000 posts from members past and present! With the new website we have decided now is the right time to move it to a new version of the forum, bringing all the new security and functionality this will contain. Obviously with 10 years of change with the new version, things won’t be the same but we will have migrated all the old posts, so the helpful information, nuggets of help and advice are still there for the members.
One other change coming to the forum is that we will be making the new version available to Kingston Wheeler members only. Our policy in the past has been to allow non-members to read and post, this was helpful for interested non-members to get a feel for the club. With the Newbie Ride and new website making it easier for interested people to understand the club, what we do and if you would like to join. This means that it will be easier for the club to manage the forum and the members can have something private to arrange rides and discuss the latest gossip. If you are a member and are now locked out, this is because your email address is out of date, please contact us to get re-activated. 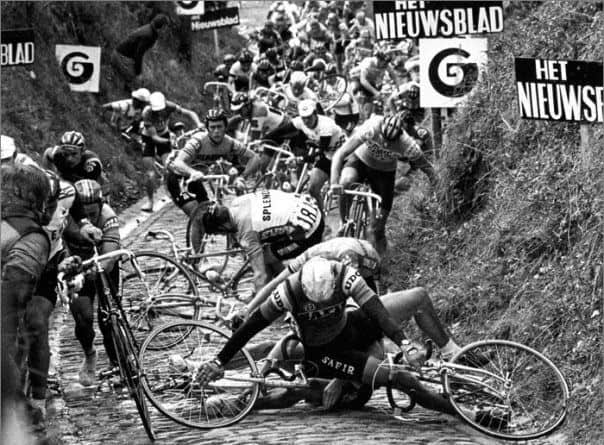 The Tour of Flanders was conceived in 1913 by Karel Van Wijnendaele, co-founder of the sportspaper
‘Sportwereld’. In that era it was customary for publishers of newspapers and magazines to organise cycling races as a way of promoting circulation. Prior to WWII the race was usually held on the same day as the Italian Milan–San Remo competition. Prominent Italian and French racers preferred the latter which explains why there was only a single non-Belgian winner before WWII. After WWII the race grew in importance when it became a part of the Challenge Desgrange-Colombo which was a precursor to today’s UCI ProTour. Since the 2005 inception of the ProTour, the Tour of Flanders has been a major component. Record holders are the Belgians Achiel Buysse, Eric Leman and Johan Museeuw and the Italian Fiorenzo Magni, each with three victories.

On May 25 1913 Karel Van Wijnendaele organised the first Tour of Flanders. It covered 330 km, all on bad roads with just the occasional cycle path. There were 27 riders. The race finished on a wooden track that circled a lake in Mariakerke near Ghent. The first race was won by Paul Deman, a 25-year-old who went on to win Bordeaux–Paris in 1914.
This year on the 4th April 2015, we have a number of hardy souls from the Kingston Wheelers membership who will be riding in the pre-race sportive. There are three different routes for the sportive – 254km (2100 metres of climbing), 134km (1600 metres of climbing) and 75km (930 metres of climbing) – with all of them having plenty of the trademark Belgian cobblestones to tackle. How tough the route is depends largely on the weather – these past few weeks has seen a lot of rain and wind for the pro racers in the Classics. This weekend the riders face a brighter forecast of 6-10deg with light winds and to make everyone comfortable dry!
Good luck to all the T-Y, James, Pat, Paul, Declan, Phil, Rich and all the other KW riders!

Have a good Easter and enjoy the cycling and chocolate!