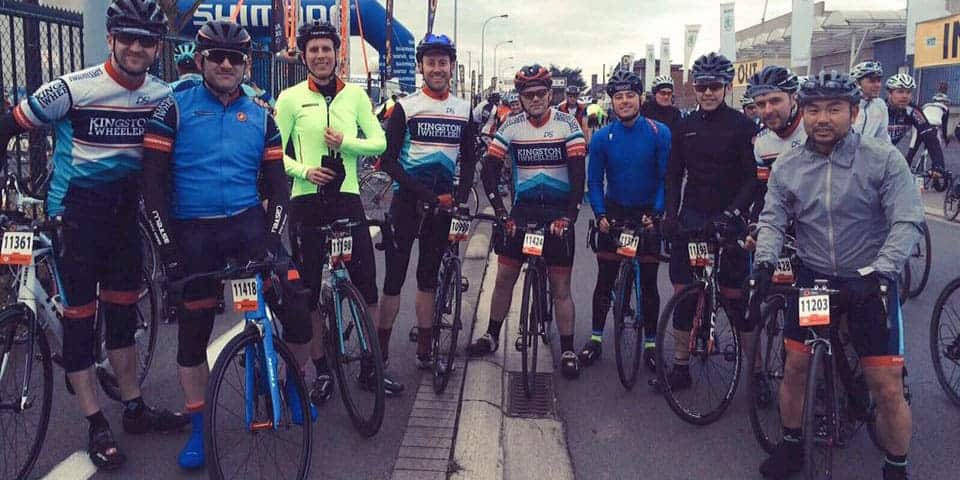 The 2016 Tour of Flanders was a great race with two worthy winners, World Champion Peter Sagan and Lizzie Armistead. On the Saturday before the race 16,000 people get to emulate the pro experience on the cobbles with the Tour of Flanders cyclo sportive.

This is an event that has three distances; full, drinkers and shandy drinkers (full, middle, short), and has followed the course of the race for every year I’ve been back on a road bike. The folks that came along for the ride were Barry, Luca, Jumpei, Oss, Adam, Noel, Richard H and Lloyd as well as Jumpei’s wife (though she wasn’t riding!).
A group of eight of us departed the UK in three vehicles, Jumpei was in Utrecht visiting his wife’s family and went about getting to the Chunnel and over to our hotel in Kortrijk. When we arrived there was a fun fair right next to the hotel and that meant road blocks… always a winner. We got into the hotel on time though and planned the following day. We collected our ride numbers, and proceeded to a local pizza place, where we all ate, and got back to Kortrijk. Bit of unpacking of stuff and sorting bikes and kit out for the following morning. A few of us went off for a beer “just the one”. Five or six reasonably strong beers later (Westmalle Tripel and Lachouffe on the bill) we then decided to get some frites, and because I was extra hungry, a burger as well. The frites were great, the burger less so… how can food taste plastic? Still, that was that and off to bed we all went. Healthy eating…
With my recent illness and average form I was just planning on getting around the course and hoping the Koppenberg and Paterberg were clear. My climbing legs have long been legendarily average at best, so I was fully expecting to drop off the back of our group and do the course at a more social pace. The group got a parking spot near the entry to Oudenaarde and we proceeded to go toward the course.
After a quick photo opportunity, we then proceeded on our way and in typical KW fashion made our way past loads of people that were trundling round. First climb came up and then the first cobbles and I got a puncture… great, the only puncture of the day from our group. Social media captured it nicely… Typical We set off again and got up and down some great climbs and roads and loads of cobbles and then to the first food stop. It was jammed, loads of people there, but luckily loads of honey waffles were there as well. These are great, they taste great and definitely help you through the ride. I think a few of the guys smuggled some extra ones out of the ride.
The bit after the first food stop was fun, with three climbs I like, including my favourite Flanders climb, the Valkenburg. Nothing particularly difficult, but so many judge it wrong and don’t have anything for the top bit!
After the three climbs in between the food stops we stopped again 5km before the Koppenberg. Then looked at the screen that showed a wall of people walking up there. Oh great, same old story…. Sure enough after more waffles and water, we proceeded and the run to the Koppenberg was fine. But once you got there, it was crazy. Literally you turned the corner, and then walked, and walked and walked. After that you then get on the bike and feel a bit deflated, but with 16000 people on or around the course you will get bottlenecks. 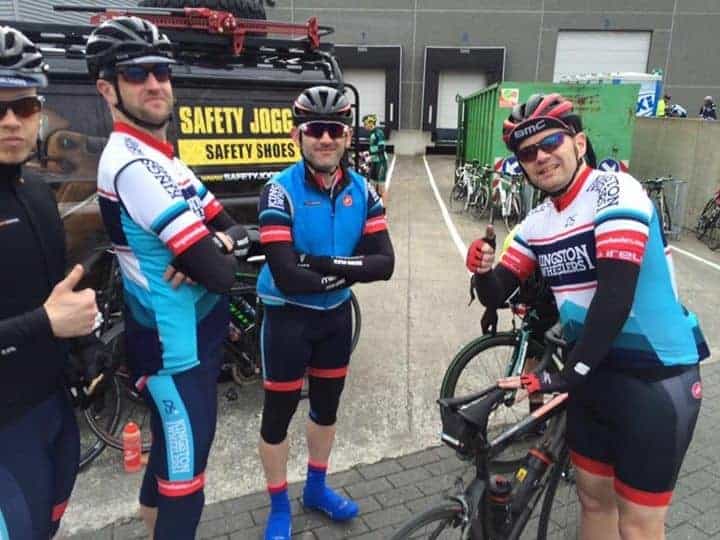 The course wound its way around Oudenaarde, which is in a natural bowl so the climbs often go out of the area, then the descents follow into the area soon afterwards. The final fuel stop soon loomed, and with it the Oude Kwaremont and the Paterberg. Unfortunately and very sadly the day had a really rather bad point. A 56 year old Irish rider had a fatalheart attack on the Kwaremont, and this was the first one in 25 years of the event. There was therefore a half an hour wait at the base of the Kwaremont whilst the area was cleared. This then created a logjam up the Paterberg as the road seemingly was full of people unable to climb it on their bike! Once the Paterberg is out of the way, there is a very fast flat area for 7km, which due to me being separated from the rest of the group, I decided to dig deep and try to bridge across in a solo Time trial effort. I was passed by a couple of fast trains, and hitched a lift to recover, and then powered across to a group of struggling Belgians and proceeded to tow them for the last couple of kilometres before they decided to launch some pretty silly sprints at the end! Some couldn’t get past me (a half fit fatty). We regrouped at the finish went to a pub in the town centre, met up with Keith, Matt and the other wheelers that went across to the race and then cashed in our timing chips, and got T-shirts, medals and made our way back to the cars.
That evening we were joined by Richard Haigh and Steph, and had some nice food but not so great service at a restaurant in Kortrijk. The guys tried a couple of bars, but I was tired so went off to get some sleep ahead of Sunday race day.
My original plan was to go up the Koppenberg and Paterberg well before the race, on the bike but my legs were creaking a bit, so I decided to join the others and go and watch the race from a decent view point. We got a spot on the Oude Kwaremont and watched the races and the two world champs came good, Lizzie Armitstead with a smart win, using her sprint to just nip past Emma Johanssen, and Peter Sagan with a great ride to get away from a select group. A few beers, and a burger or two later we trundled back, and then got set up for going back after having another pizza that evening at a highly rated pizza place… that was much better than Saturday night’s food!
Anyway, Flanders is always worthwhile going to and this year was the best yet for me. Thanks to those that came along in my group, it was really great fun.