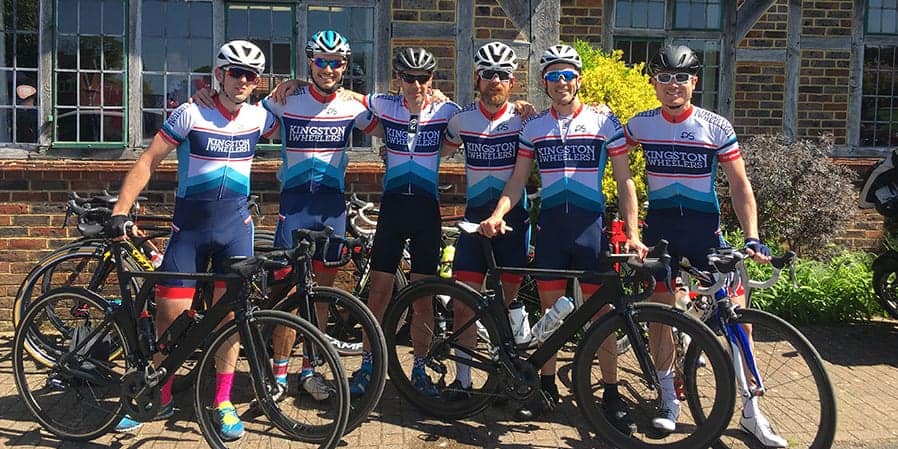 Going for Green at the May Stage Race

The May Stage Race is a three day event hosted by the Surrey League. We entered a team of 2nd and 3rd cat racers who had a mixture of experience and strengths. With Club Champion Declan renowned for his short term power, Rich as an all-rounder, supported by Seb and Tom, with two 3rd cat newcomers Shaun and Dominic. Declan Egan and Rich Seabrook recount the weekend.

The plan was for me to go for the win on stage 1 and thus the Green Jersey. We planned hold the race together for the most part and I would pop up for the two intermediate sprints and take pointsBefore the race I had done my due diligence and I had marked a couple of riders out on my stem that I did not want to see going up the road in a breakaway.
Early doors myself and various Wheelers were never far from the front, first five wheels, making sure nothing got away and anything that did, close it down before letting it get too far away. About 30 minutes in a few riders dangled off the front, maybe 10 seconds or so. I was not too worried about that but then I saw a hard attack go in from John Hale (Worx). He was one of the numbers on my stem.
I had a quick look for teammates and as I was best placed to go after it, I jumped after him. What ensued afterward was a 90 minute breakaway with 7 riders that I didn’t plan to be in, but we were out front of the race, meaning were mopping up the intermediate sprints points. Whilst in the breakaway, I was economical in my efforts. I was not interested in blowing energy at stage 1 of a 3-day race.
We continued on with the breakaway and were out front from the two intermediate sprints at 22 and 44 miles. In the intermediate sprints I took 1st and 3rd. With a 45 sec gap, unfortunately the race came to a standstill when a pony and trap was on the course. The comms set us off with the gap reinstated but it seemed that we lost our lead quickly after this, perhaps seeing us motivated the peloton. Despite the efforts of Wheelers to disrupt the chase, we were caught at about 55 miles.
I sat back in the wheels in the peloton for a lap or so, before moving back up through the peloton, finding Rich within the first few wheels. I told him to just keep the pace fast but steady, which in his head was an entire lap pretty much on the front closing down anything that went off and holding the race together for a bunch sprint. Bell lap he continued to work the first few wheels but with half a lap to go, he had done his work and I began to surf wheels.
I found myself third wheel about a mile out, but they lost position, dropping back to about eight wheel. I knew where I could go hard from but Ollie Richardson (Twickenham) picked up the sprint too early (for my liking) and I had no option to go with it rather than get swamped. I hit the front and stayed there (1,110w for 25 seconds, peaking at 1,585w) until about 50 meters from the line when I was rolled, taking 3rd. I went from too far out for sure but the only difference it would have made if I launched from my preferred place would have been the difference between 2nd and 3rd as a solo rider clipped off the front with about 2 miles to go.
Third in the final sprint (10 points) combined with third in one intermediate sprint (2 points) and a first in the second intermediate sprint (5 points) mean that I had 17 points. The stage win is only worth 15 points making me the green jersey holder.

I worked for the team at the start of the race, chasing down any moves with green jersey contenders in. I felt more confident after yesterday so took up the role right at the start. Before the 1st intermediate sprint, Declan got away with Pat from Paceline, who I knew he could take in a sprint. Shaun and I blocked the road and let them go.
Declan was first at intermediate 1, I got a bit boxed in and only got 2nd from the bunch, 4th overall.
Next lap I was just sitting in second wheel rolling up the drag after the finish line, following a Wyndymilla rider and realised we had been let loose – I like to think they knew it was the only way to get rid of me shutting down all the moves. We committed and joined matey up the road after another lap. I took all 5 points at the second intermediate, you never know if either of my companions could move up the classification by end of tomorrow and it was easier to take them than do maths.
We were joined shortly after at around four laps to go by a group of nine, which annoyingly included three green jersey rivals. Two teams (Southdowns and Meudon) had numbers in the lead group (3 and 4) and I was isolated. They worked the group a bit with one-two attacks, but nothing too full on. I did some turns but not hard turns, just enough to keep me near the front as I thought the two well represented teams would happily let this group crack and divide the spoils between themselves. Once we got within two laps to go and the car between us and the peloton hadn’t been pulled out we could see it was gonna come to a sprint and Meudon took up the pacemaking in the final lap. I picked up one of the green jersey rivals from South Downs into the finishing straight, hoping to follow his wheel and steal his points but my quads cramped and it didn’t pan out. I ground it in for 7th.
Interestingly the peloton rolled in 70 seconds after us, so even with the 40 seconds I shipped yesterday I’ve found myself 9th on GC. We would need to balance the GC defence with green jersey campaign in the final stage, with Declan one of three tied for first place in the points classification.

After wearing the green jersey on day 2, I had done my calculations and knew I was on the same points as a rider who was higher on stage GC, but was awarded the jersey as my points had primarily come from true intermediate sprints. Therefore the ride would be about keeping the jersey, rather than chasing it.
Amongst the team, we felt it would be best to try and secure the jersey for the team. Rich was placed in the top 10 on GC so that was a rather unselfish move to commit to ride for the jersey rather than his own position but the team was keen to take the overall green jersey.
Intermediate sprints were at lap 1 and lap 2. For the first intermediate it was in road book to be at 26 km. A rider chipped off the front a few kilometres out from the sprint but he was no danger to the points jersey or to GC so he was allowed to dangle. Rich was on the front making sure the pace was high enough to prevent attacks and I was sat in sheltered. About 500 metres out I asked for more pace, which seemed to come as a surprise.
I later found out that Rich was looking at the distances on his Garmin and that read 20 km so didn’t think the sprint was where it was. In any case he gave me an ideal lead-out, We didn’t catch the rider (we didn’t try to be honest) and he rolled through first and I took second uncontested, giving me 3 points.
Before the sprint is after a leg sapping grippy drag.
On lap two the peloton had went up hard up for the KOM points that and I was close to losing contact with the bunch. I think that if the right men had amassed at the front there and attacked over the top, the race would have blown to pieces. Rich was right up there with that move but just rode the wheels and kept anything from flying off the front. I had mentioned to Rich about this during the lap and he agreed to stay near the front to stop any attacks whilst the others Wheelers stayed back to protect me.
Lap 3, I knew it was coming so moved up early doors for the climb, to give me so sliding space, a tactic I use in almost every race.
By the time we were cresting it I was almost out the back but had Dom with me. He got me up and over the climb and as soon as I was able, asked him to drag me from the back of the peloton right up to the front, which he duly obliged. A sheltered ride from the back of the peloton, right up to the front, dropping me off on Rich’s wheel, who was still holding position up front, with Seb who had moved up nicely too.
To our surprise, there is no flag, no sign of an intermediate sprint, We ride on for a while thinking maybe it has moved (which would be unheard of, but we ploughed on). We later find out the sprint was abandoned as there was gypsies in the vicinity of the sprint and a decision was made to cancel the sprint, thereby the opportunity of five points is lost.
Even before the race, I had told the lads, if they get me to the line, the finish is the kind of finish I can win. On checking the night before, I saw the fastest time up it was 24 seconds, won by a guy I have beaten in two sprints this year already. With about a kilometre to go Rich has me in a great position, about six wheels back, sheltered and with 2 of my main contenders in front, and I couldn’t have asked for a smoother line up that far.
About 100m out for the final corner we begun to get swamped a little so I kicked out of Rich’s wheel and end up in third wheel coming into the final bend. We took the bend fast, perhaps overcooking it a little as it’s slightly off camber.. I leant the bike over more to ensure I didn’t land in the gutter too whilst at the same time tried get on the power but with bike still leant over and I pedal struck. My shoe unclipped and I lose the wheel and a few rides get past me. Somehow I get clipped back in and get on the power again. I crossed the line 5th with my main rival for the green jersey coming 3rd.
That meant I got 9 points toward the points jersey, whereas coming 3rd on the line is worth 10 points, meaning I lost the jersey by a single point.
I am grateful for the support that the team offered but disappointed that I didn’t hold onto the jersey. The upsides is that I get to keep both green jerseys I wore on second and third days, which is awesome.
I think the team learned a lot from the race, and why the buzz of stage racing is so addictive. Plenty of lessoned learned and hopefully we can build on it to get some big team results over the rest of the season.