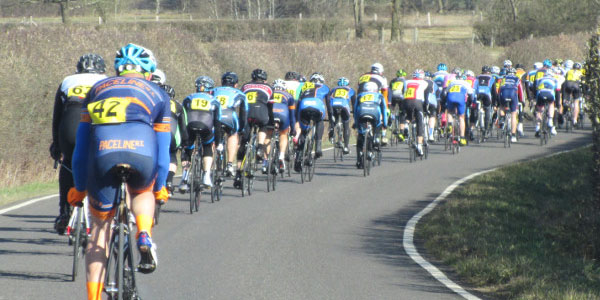 Looking back on the forum it was over 2 months ago when the initial request for volunteers was posted. 2 months plus more time, I am sure, is an indication of the effort involved in organising the road races. Kingston Wheelers had strong representation in each race and required approx. 60 volunteers for the day, not to mention that cake bakers. That is a huge club effort.
Luckily the road race landed on the day that spring decided to arrive. The sun was shining, the forecast looked good and even at 8am the hall was bustling with all the volunteers. Even before then, at a time of day most people wouldn’t recognise, the signs were put on the course. There was a massive pothole that had recently appeared on the course and the organisers rearranged the marshals to ensure a couple were at the spot to warn the racers. This was very much appreciated as the hole was on a fast section on the racing line so could have caused a nasty accident.  The race went off without a hitch and was very exciting. Maybe it was early season enthusiasm but the pace was brisk from the start, there was lots of activity off the front and finally one stuck towards the end of the race. The marshals did a great job to keep the racers safe and everyone stayed upright. Gareth Thomas, from Paceline RT, proved too strong, even after his herculean effort to get away in the first place and rode away from everyone else to victory. We had one of our own come in 2nd place with in form Andrew Davis. The other two escapees were not far behind and then it was left to the bunch to sprint it out for the remaining places. Another Wheeler, Dai Michael, managed to grab the last points spot as an added bonus, as he had been working hard with the others to control the group.
There was plenty of time for everyone to head back to HQ for a cup of tea and cake before it all started again. The organisers had to co-ordinate the marshals with some last minute reassigning of roles and the second race of the day was off and running. This again had a very quick pace from the start with a number of people attacking early on. Several groups formed but were only brought back in. Finally a group of six did stick but only just, the gap was never more than 30 seconds but they managed to carry it all the way to the line. The bunch still had plenty to sprint for and KW Ross Bernard dug very deep to bag 8th. 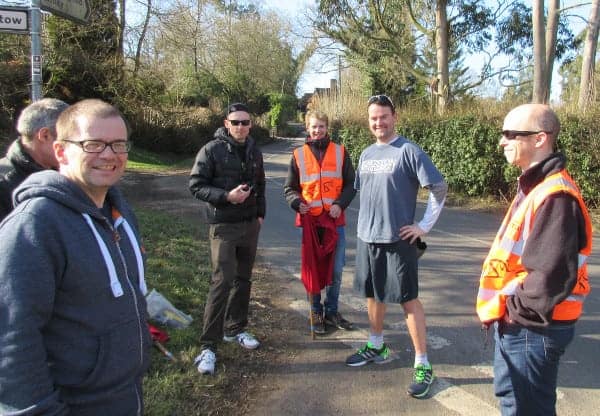 It is interesting to watch the day progress and the steep learning curve that goes with it. It is very tricky to get the results in a field of 60 riders and you can never have enough spotters at the finish line. Although there appeared to be plenty at the first race every available resource was called upon to help spot at the second race. The finish judges were still in hall after everyone had left trying to finalise the results. They were so focused they had to be handed their tea and cake whilst busily working away. There were still the final chores of collecting the signs off the course and tidying up the hall before it is locked up until the next event. The whole day was over 12 hours long for some, with so many people coming and going throughout the day. It was a great social environment and nice to chat to fellow club members off the bike. The whole day was a great success and to get such nice feedback from those outside of the club reaffirmed that. Everyone who did their part, big or small should be very proud.