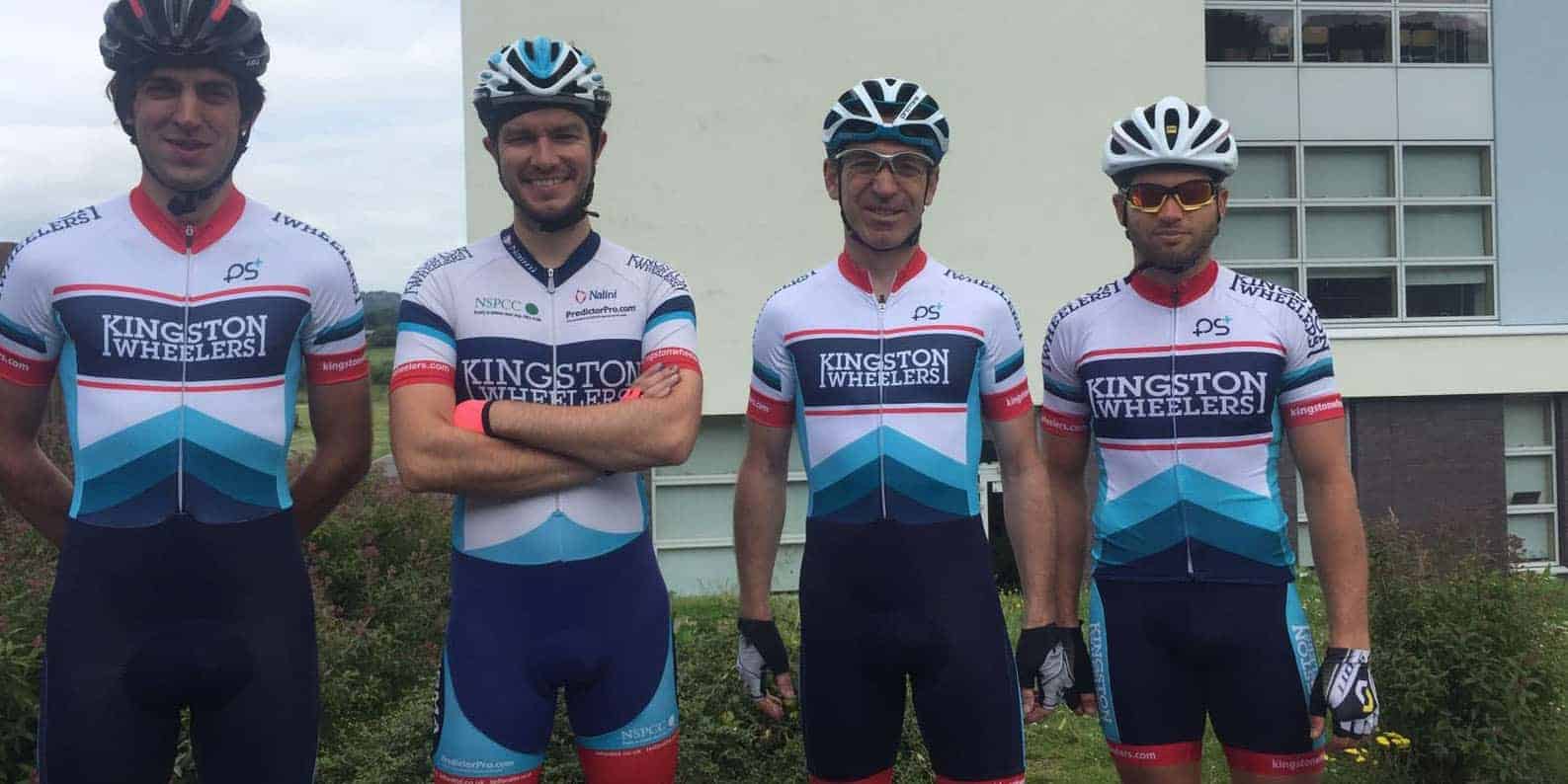 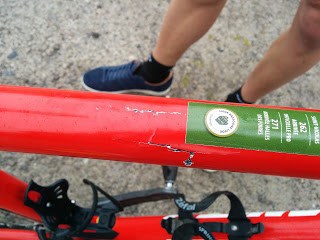 Sunday didn’t start very well. First it was raining. Then, when we were to get our bicycles out of the car we found out that Joe’s frame was broken and unsafe to be ridden. That was really disappointing; he crashed, he now was out of the race and he had a broken frame. It then was Tom and myself the only two wheelers for the third and final stage. 70k with 900m of climbing. As we said, just a club run at K0.5!
Very diligently I had put a note in my frame with the kms for each climb. I was prepared but I also was pretty sure of what was going to happen. The bunch was going to stay together until the first climb. That first climb would be climbed all out and groups would be formed but those groups would not merge again. To be honest I had not much faith on me holding it in the front in that first climb. We rode the 10k from the hotel to the HQ and the excellent news were my legs were feeling great. It was like if I were totally recovered. I wasn’t feeling any tiredness from the two stages the day before. That, surely, should have been my brain tricking me but it was a great feeling. The stage started and the rain kept falling. It was not cold and it was not raining a lot but just enough to make everything more challenging.
My glasses were fogged half of the time. I didn’t want to take them out because I wouldn’t see anyway with the rain and the spray from the road on my eyes. The notes I had in my frame were mostly useless because I couldn’t read my Garmin. At some point I thought I have to buy a new, better, pair of glasses. The ones I have are the cheapest I found at Decathlon (9€ if I remember correctly) and I’m pretty sure there should be glasses that perform better in these circumstances. In any case I did very well getting my gel well before the first climb and making sure I was in the front when it started. Not that it helped much. With only 25km in the legs it took me a while to find my own pace and I felt like the whole peloton was passing me. I still managed to climb at a very decent pace according to my capabilities so I won’t complain. In fact as soon as we hit the top of the climb I started to pass riders. Tom had finished just a bit ahead of me and I was trying to catch up with him. Descending this first climb I saw Sam on the right hand side of the road. He was looking at his bicycle. I figured he had crashed but he looked all right to me. The descend was fast and wet so I’m not surprised some crashes happened. 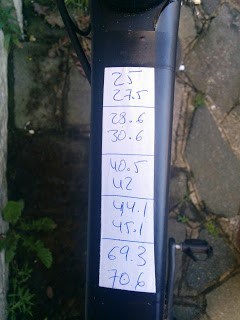 The second climb came and this time it was easier to me to set my own pace. I was starting to feel great and actually I was enjoying the stage (why I was actually enjoying a hilly stage on a rainy day when I had been dropped is beyond me?). Another fast descend and a group was formed. Almost automatically we started to work together taking turns. Tom and myself did our share. The problem was that part of the route was not very good to ride fast as a group, too many turns and roundabouts. In fact very soon came the third climb and there we all were on our own. In the fourth climb I saw ahead of us a group of riders and I figured that if I could bridge to them I could gain some time. As I felt I had good legs I pushed it a bit and got away from my group. What a great feeling when climbing you leave your group behind!!
Still my movement was a bit of a nonsense. I couldn’t bridge quickly and soon I found myself in no man’s land. I gave it a few seconds to consider what to do, easy up and wait for the group or keep pushing and waste energy? Against my logical mind I opted for keep pushing. Luck played in my favour. In the descend a couple of riders caught with me from behind (I’m a crap descender) and the riders in front of us slowed down for a traffic light before realizing a marshal was retaining the traffic for them. Those seconds they slowed down allowed us (me, the two riders that had caught up with me in the descent and the rest of the group that was coming from behind) to catch up with them and a group or around 20 riders formed. With all the hills passed it was clear for me that this group was going to finish together. I was very happy because Tom was also in the group and we both were riding well compared to the rest. In fact after the stage we commented that we both felt the group was riding too slow in the climbs. When we entered the A48 Lawrence and Joe passed our group in the car. As they passed they waved at us and we saw them. It was great to see they were involved in following the race.
The group was speeding up as we were approaching the final ramp to the line. This is the same final ramp as in stage 2 so I didn’t worry about what the others were doing. I knew the climb and I knew how I was going to climb it. Still I found myself pretty much at the front of the group climbing at my own pace. A few riders sprinted but most of them were, like me, just riding a pace they could constantly sustain. I ended up crossing the line the 6th of that group of 18 riders. 36th in the stage, 8:15 after the winner. Not a result to be proud of but I was really, really, really happy with it. It was a great result for me. 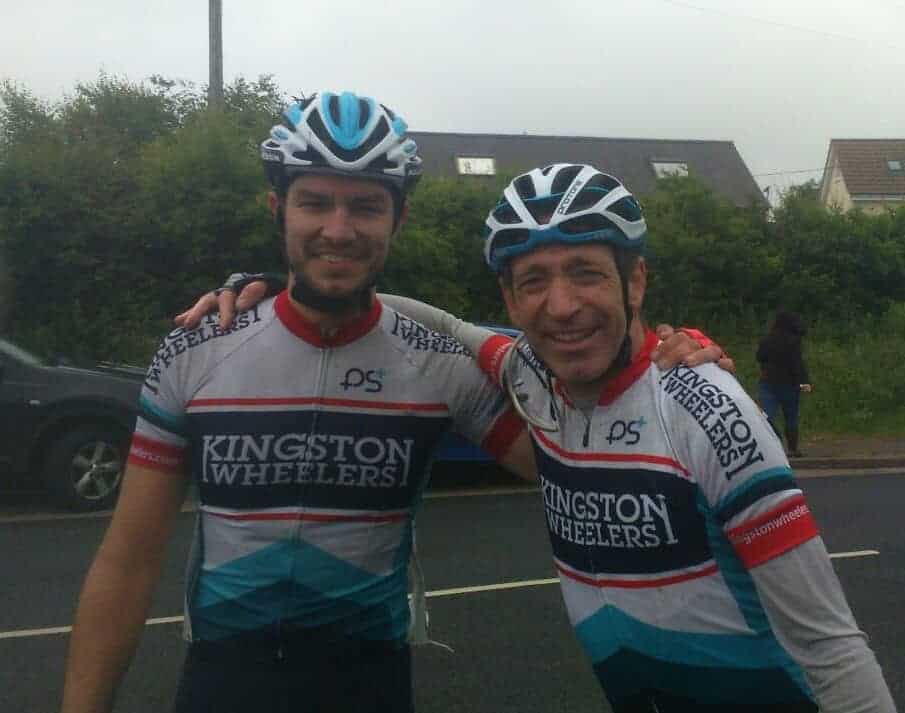 Overall this has been a great experience. I loved every minute of it. Spending time with Joe, Tom and Lawrence was great; we had a relaxed and fun atmosphere that helped to deal with all the bad luck we had as a team. Now the problem with this great experiences is I always want to repeat them. In particular once I know the stages and knowing they are the same year after year I would like to have another go preparing more specifically for it. The only problem is this weekend, third weekend of June, is Quebrantahuesos weekend and that takes priority for me. But in previous years this race was held in July, if next year it does not clash with the Quebrantahuesos (or if I don’t get a place at the Quebrantahuesos) I’ll ride L’Etape de la Defonce and I’ll do better. You can bet on that.