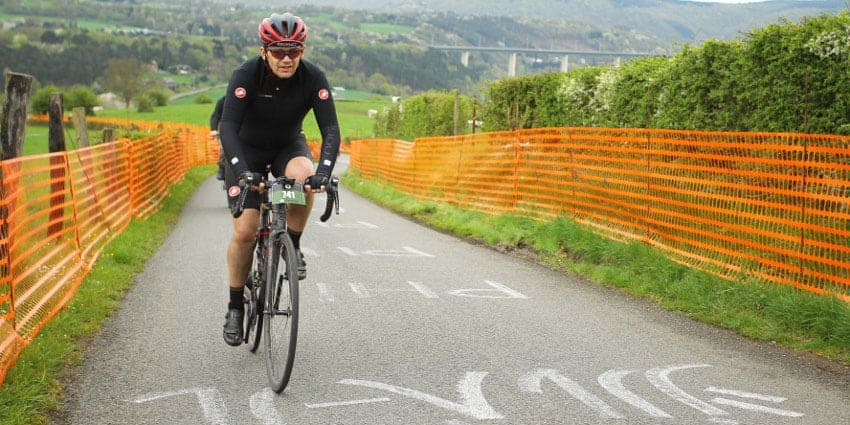 Phil Barella went to Liege-Bastogne-Liege again for 2015 along with several other Kingston Wheelers, here is how he went….
Last year this was really tough, it was the 100th anniversary and the organisers had included a few extra climbs that were not easy on my non climbing legs. This year I was under trained in hill climbing, and 6kg heavier than last year because of this lack of training and a diet that seemingly has got worse rather than better! It was bound to go well! Ben Speller offered up a lift and found a great hotel, so unlike last year where there was around 15 of us together this time there were 2, and several others doing their own thing or with friends.
I was looking at the weather for this all week in the build-up and it looked pretty miserable, though on the journey in on the Friday morning the weather was ok, and we made reasonable progress though the area around Brussels on Friday PM resembles the M25 on a bad day. Once clear of that though, we made our way to the Hotel that was located around 10 km north of Liege, (right on the Limburg border) and the rooms in the suite were one double and one bunk bed with a largish table and sofa in the main room of the bedroom section. The host was amazed to hear we were doing 273 Km, in one day, but we were, and there was not much talking our way out of it! We met with 2 Dutch guys and 3 other English guys all doing the medium distance. surprisingly they thought it was relatively flat, except the climbs. I explained that there is virtually no flat road throughout the course, and that some of the non categorised areas are actually harder than the categorised areas! They sounded a bit apprehensive, but I reassured them that if they could do a 100 mile moderately hilly ride, they’d be able to do this! I was more worried for myself to be honest.
So after packing the bikes in the car we drove to Liege and parked next to a disused factory along with hundreds of others, arriving slightly late as we worked out exactly what we needed. We trundled to the start with a game plan, simply get into a group and stay at tempo on the shallow pitches and reserve power for the big gradients and categorised climbs, and stay working in a group for as long as possible. Ben’s a far better climber than me so I said if he goes ahead and stays ahead then so be it, as I was going to be getting round without smashing myself to bits. Of course once I arrived with Ben I then realised I forgot to put some chamois cream on. This was going to be a long day!

Thus we went through the start finish area and made our way out of Liege, which is a constant rise to around 1500 feet over a variety of gradients but none above 6-7% so not challenging really. Once clear of the urban sprawl of Liege you are greeted by some great landscapes and some wonderful hills and rolling roads. Up to the first food stop (which we passed) there aren’t any categorised or “named” climbs, they are all part of the course but by then I’d had probably done the equivalent of 2 hills worth of climbing in the Surrey hills. Not a problem, I was feeling relatively good and keeping myself to sub 250 watts up the climbs so that I’d still be there at the end. A few km after the first feed stop I backed off slightly as I was feeling a little jaded and Ben was carrying on so until the end I was on my own, with regards working with other wheelers. Soon we made it to the first categorised climb, the Côte d’Ortho or the Côte de la Roche-en Ardenne but before that the N89 descent to the climb. This is 7km of pretty fast descending roads that I worked down with a German guy (who held me up for a fair bit of it to be fair), but I got clear of him for part of it only to be held up by another guy towards the bottom of the descent. The descent is pretty much mirrored by the climb at 5.6% average for the way up the hill so no real drama’s though its nearly 3km so slightly longer than the average Surrey hills climb.
Next up was the first of my food stops and I took on some fresh water (Btwin do the water and some of the food for the fuel stops, it’s actually not too bad), and a waffle or 2. Got back on the bike and proceeded to work in a small group sheltering from the pretty savage headwind where possible. Next up amongst the squally showers was the Rue Saint-Roch or Côte Saint Roch. This was a sod of a climb, averaging 11% and topping out at 20%for 1.1 km. Bottom gear and grovel up there. Then realise it isn’t that bad and gear up right when it hits 20%, and try to maintain cadence. Go surging past a couple of people, then start feeling it, so gear down… and get to the top. Bridge across to another group, burning what seems like 6 boxes of matches and then on to the Côte de Wanne, and following that the Stockeau. Both are really difficult climbs.
Longer than their British equivalent, but ultimately if you are able to follow a wheel, aren’t too bad, but at the time they feel awful!

It’s at this point that I realised that my gearing, whilst good enough for the Surrey hills (lowest was 36 x28) sometimes on the steep stuff I think maybe a 34×28 would have given me slightly easier time over the 16-22% parts of the course. But I was in The Ardennes now and there was no turning back. more unmarked lumps and bumps and then more food, and a chance now to engage the slight tailwind and see what I could do within myself selected power constraints, and to test my efficiency, as I had been practising this for some time in my autumn/ winter training. This paid dividends between cols and also up them though because of my extra bulk compared to last year (79 against 73kg) I wouldn’t beat many times uphill, especially not on the steeper stuff.
Next up was the Haute Lauvee, a steady 4km at around 6%, and again I made my way past a few folks and then the Rosier, a climb that starts and proceeds through a forest but is open for about a mile then gets gloomier the further into the forest you go…where the gps signals rarely get through, so I really wasn’t going at 1mph, despite what my Garmin was telling me. After this there was some sketchy descending towards La Redoute and some flatter roads where again I made my way past a few tired souls before joining a group of Italians and Belgians for the climb. La Redoute is just awkward, it’s tough, and it has loads of people in touring buses either side of the road getting slowly more sozzled as the day goes on. there are inscriptions on the road of “Schleck” and “Phil”, but not fat Phil ( i.e. me) but Fast Phil, Philippe Gilbert. the climb is his local climb and one that he favours apparently. Some say the pro’s can big ring part of this but me, no chance. spinning slowly in my lowest gear was challenging enough. Over that, down the descent and on to the final food stop where I wolfed down more sugary stuff and prepared for the last part. By now my left knee was doing its usual, and was a bit sore.
So onwards and indeed upwards. Roch aux Faucons is a nasty surprise at an average of 10% for 1.5 km, with a couple of 16% parts. I punctured here and had to pull into a drive and was nearly run over by the owner of the house! Nice surprise. got up that hill and then headed towards Liege, the rain had stopped about an hour back and I was actually enjoying the ride, but my legs were starting to creak a bit and I missed a turn that added 3 miles to my route and a few hundred feet of climbing!, and I was full of used sugary stuff so not exactly full of energy.
The town of Ans is the final part after the Cote saint Nicholas, which again is around 11% for what seems like forever. once over that there is one more major-ish climb which is the climb up Ans and this was where the final selection allowed Valverde to stay and drive the pace up the hill then out kick them. I trundled up in the wheels of a group and decided to unleash what I had left at the crest. 957 watts later (after 269km) and I had a gap that I maintained through the cobbled sections and descents back to the start finish area from my cohorts.
Once I got through the finish line I felt actually not too bad, and the day whilst weather-wise was pretty poor, the experience was great. the medal was nice and chunky and the t shirt a nice bonus. full distance finisher, should be replaced with full distance finished!
Some things that I should have done: