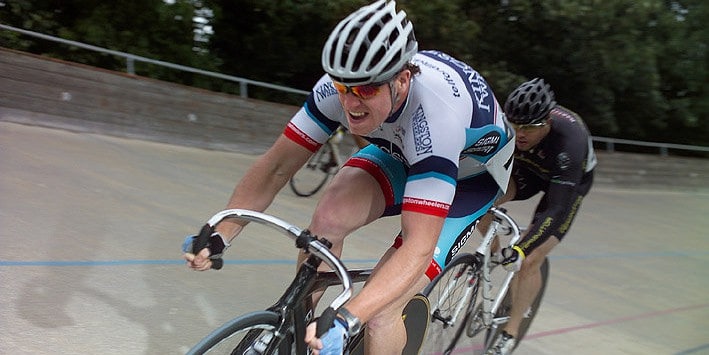 Grey skies, strong winds and the threat of rain was the order of the day for the riders that had turned out for the Olympic Omnium track racing at Herne Hill Velodrome on Saturday 31 July, writes John Coolahan. For the first time in nearly a decade the London Borough Champs were being held, what better way to celebrate the fact by running a race programme that hasn’t been run before, even at international level! The Olympic Omnium is a punishing schedule of 6 different races, testing the ability of riders over a variety of different distances from the sheer power and speed of a flying 200m TT to the tactical and more endurance based 15 lap Scratch Race and Individual Pursuit. Similar to the SE Champs, discs, deep sections and 4-spoke wheels were being bandied about with riders warming up on rollers and tinkering with handlebar setups, once again clearly a more serious affair than the monthly Open meetings, what do you expect with medals being handed out I thought to myself?! The game plan was really to see how the races unfold, a good showing in the sprint events (200m and Kilometre TT) was what I had come to achieve.

250m to get up to speed then 200m as quick as you possibly can, what could be simpler than that?! Strong winds made getting up to speed quite a drawn out and leg sapping affair compared to the efforts completed at Newport, at least it was the same for everyone. Staying close to the fence, timing the main jump of the effort was always going to be key, jumping too soon would mean pedaling squares for the last 50m but jumping too late means an unspent effort with more power to give. My effort went relatively well, 3 hundredths of a second quicker than at the SE Champs but in far worse conditions, perhaps I’m getting quicker? More likely it was down to the Corima disc wheel very kindly lent to me by fellow Kingston Wheeler and Squadra Donne team coach Steve Wright. The effort placed me fifth overall of the 35 riders starting the event – must try harder was the response to this. The Omnium format was scored with the first placed rider in each event being awarded 10 points down to tenth who received 1 point, 6 for me to start with…

Although not as far as the standard 4km individual pursuit, this was an event I was absolutely dreading and not expecting. Those Wheelers who were down at Newport may remember my first ever attempt at the Kilometre (‘Kilo’) TT and the crumpled mess it left me in for 30 minutes afterwards, this was going to be two and a half times as long! I even hesitated as to whether or not I was going to even start this event as just prior to the race Miles Anon and Miles Stovold (both Team Terminator) approached me and asked if

I would like to form a composite team to race in the Team Sprint competition running alongside the Omnium. After much deliberation I decided to ride the pursuit, the first two laps being very much a steady affair, just feeling the lactate slowly starting accumulate in my legs but still feeling like I could go faster. After the first half of the pursuit the sprinter part of my legs started to give up and left me with my very much neglected slow-twitch muscle fibres to keep me company for the remainder of the race, oh how I hate you slow twitch muscle fibres…
Not having a TT setup on the track bike meant that all I could do was ride on the drops or assume the slightly sketchy ‘Preying Mantis’ position, this I figured would lose me lots of time. 2.59.29 was good enough to place me a surprising 6th overall, 5 more points towards the Omnium overall.

Apparently I’m meant to be a sprinter so after being asked by Team Terminator to make up their team how could I say no? A lap and a half at 100% awaited with me going off second man, taking shelter from the Miles Anon for the first half a lap before leading Miles Stovold over the second half and letting him bring the race home for a further half a lap. An insanely fast, hernia-inducing standing start, followed by clinging onto dear life of Miles Anon’s wheel opened the race before tying myself in knots to leave Miles Stovold to finish off the race. 48.01s finished us in first place by two and a half seconds. Later on I unfortunately found out that as we were a composite team we weren’t eligible for the a medal…

After the debacle that was my Kilo effort at Newport a few weeks back I was determined to try and make this effort a more dignified affair! Standing on the pedals with my backside as far back as I could possibly get it ‘bang’ goes the gun and off we go. Throwing my considerable weight forward I managed to get quite a nippy start which is so important in this event (especially so considering it was in fact 900m instead of the standard 1000m). I decided not to go completely all-out over the first 450m and then die a horrible death for the last lap (exactly what happened at Newport…), however, this game plan went slightly out of the window when I realised I was starting to catch the person in front. At national level the Kilo is raced one person at a time on the track, due to time constraints and the sheer number of events to get through four riders were on the track at a time which was actually better as you had people to chase! I didn’t manage to catch the person in front but did make up some time. Fourth place in the event with a time I was very pleased with and another 7 points towards the Omnium.

As the results from the previous races were being accumulated and announced it soon became apparent that it was becoming quite a close-run affair. Symon Lewis (Sigma Sport Specialized) had already sewn up the overall and was running away with the title, with Jake Martin (One-Life Development Squad) having a healthy lead in second place. The battle for third was a hot contest with four riders (including myself) were all within a couple points of each other. The pressure was on with only two races remaining in events that traditionally don’t really suit me. First up was the elimination race and with increasingly tired legs I took to the track. A quicker than normal ‘neutral’ lap and the race was underway with riders jockeying for the ideal position not to get eliminated straight away. The laps steadily accumulated with my aim of finishing in the top ten riders to score some Omnium points slowly becoming a reality, however, a momentary lapse in concentration and a loss of position resulted in ‘number 15’ being announced over the PA system. Absolutely gutted and thoroughly dejected I slowly came off the track and sat down as far away from people as possible to give myself a good talking too; that’s it no chance of a result now. 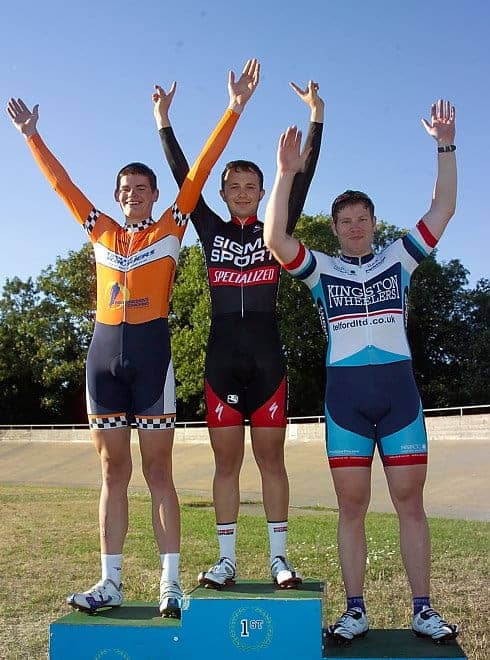 After 20mins on the rollers and a lot of thinking I decided to give it one last push and race in the final event of the day. A renewed fire in my belly in the knowledge that I was fifth overall and if the results fell favourably I could still possibly reclaim a podium spot. Miles Stovold was five points ahead in third place with James Solly (VCL) in fourth only one point to the good; both were racing in the final event so it as going to be an interesting race.
The first couple of laps went by without incident at a steady pace, making sure that I was placed firmly at the front of the race so I could see everything that was going, trying to delicately balance staying near the front without working too hard. All the big names including ex-clubmate Jules Birks, Iain Cook, James Solly (All VCL), Yasuyuki Sakurai (Brixton Cycles),
Matt Theobalds (CS Grupetto) Jake Martin and Symon Lewis were ominously congregating at the head of the peloton and its soon became apparent as the pace was increasing that the race wasn’t going to end in a bunch sprint. This was actually welcomed from me as I figured that a sustained high tempo race would be enough to drop the pure sprinters (possibly myself included!) from the race. Repeated digs off the front by various riders went by with me occasionally jumping across to something that looked like it may stick.
It wasn’t until four laps to go that the winning move formed. With Symon Lewis out of position Matt Theobalds, Jake Martin and James Solly took the init 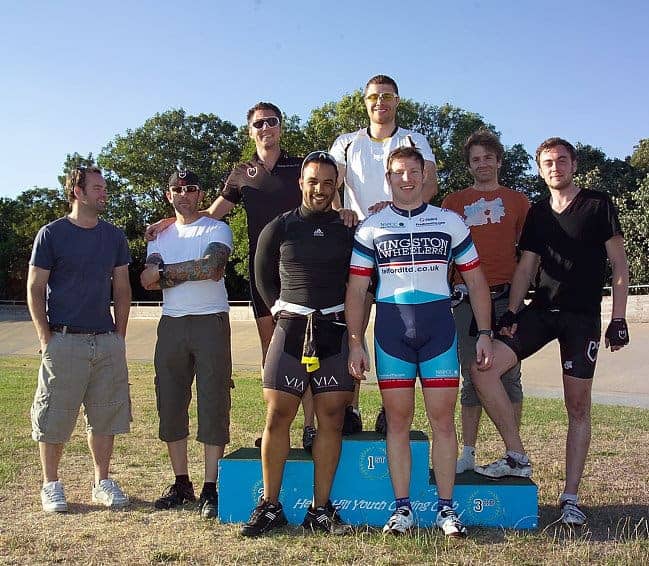 iative and pushed off with me joining them just as the gap to the main group opened up. Working well together we opened up a small gap of about 10m that was just enough to stay ahead of the bunch. One lap to go and some tired legs in the break were appearing, with the bunch gaining on us Lewis bridged across and with this Martin made his move sprinting from 400m out to take the win. The bunch never really made contact and in the final sprint between the remainder of the break I took third just behind Lewis, 8 points towards overall. The results were totalled up with the final race of the day deciding the final podium spot with me being lucky enough to be on it.

Many thanks go out to the organisers of the event, Ron, Brian and Dereck for officiating and George for running sign-on. Also thanks to Conor Bunn (VCL) for the impromptu MC job and Paul Churchill for the photography. Most of all thanks to Jason Cattermole (VCL) who seems to be single-handedly running the competitions at Herne Hill this year, long may it continue!