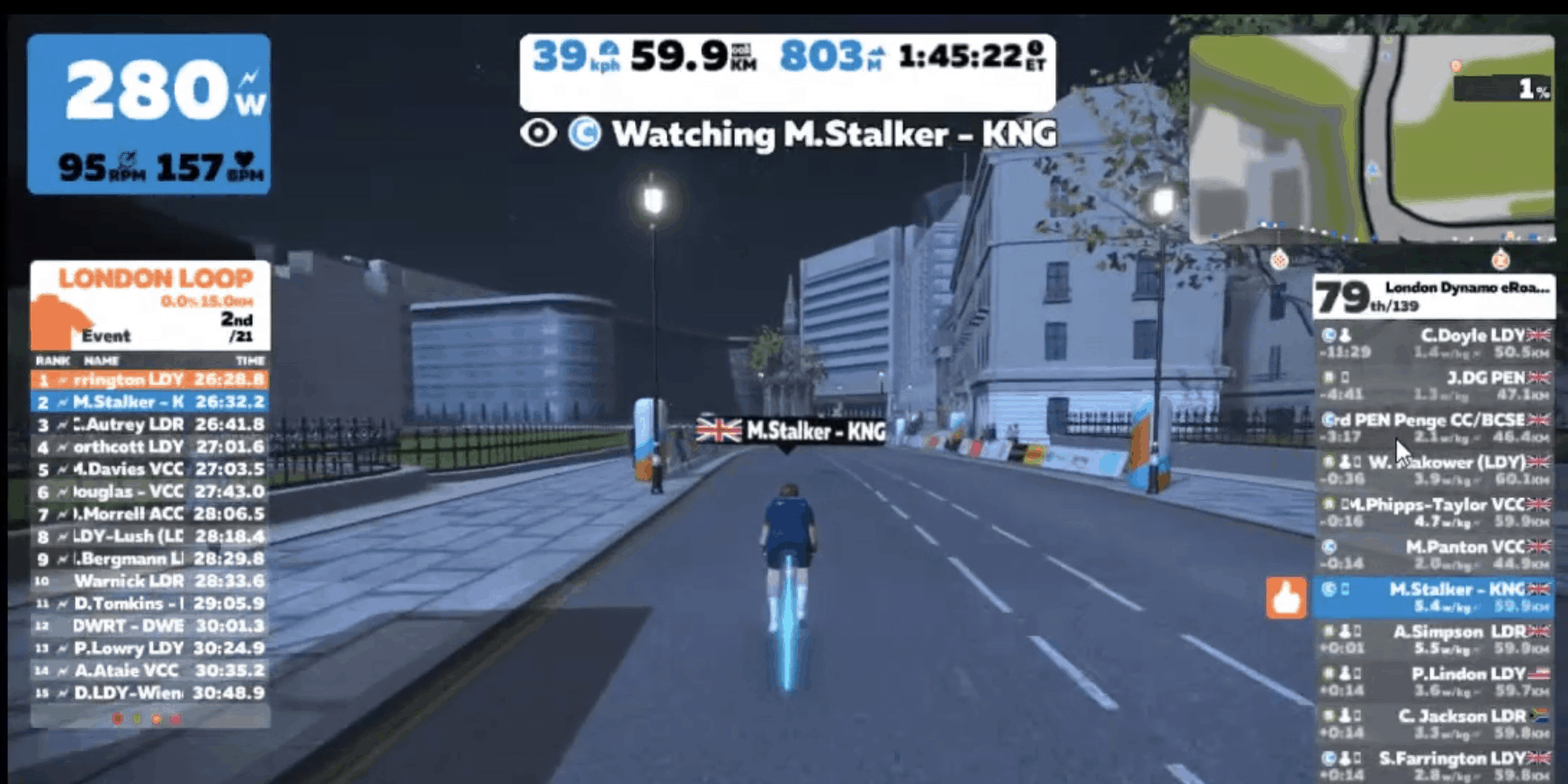 On Sunday 7th June our friends at London Dynamo ran an eRoad Race on Zwift, to replace the Nat B that they would have usually held that weekend. We had a big contingent of Wheelers enter across all categories, but it was Mathew Stalker who lit up the action taking the win in the Cat C. He reports back on how the race unfolded…

I’d had a little experience of Zwift racing before: brutal starts; category D riders holding 5W/kg; and the surety that my power meter must be under reading as I sweat buckets onto the mat beneath the turbo. Riders are helpfully categorised into similar capabilities based on their expected power to weight ratio – but many ignore it, others just drop their claimed weight and there are plenty of stories of people fiddling with their power meter readings.

I’m not quite sure why I signed up to the London Dynamo’s eRace, but I found myself sat on the turbo at 8.20 on a Sunday morning. My avatar sat spinning away at the start line; Alice’s in the Kingston Wheelers’ allocated Sigma Sports kit nonchalantly ignoring me just to my side (though being an avatar it couldn’t do much else).

The usual start ensued. The fast guys shot off the front and the rest of us were strung out behind.

I spent the first lap trying to stay with a mixed group of mainly B and C riders. The group split up on the first ascent of Box Hill. I spent the second lap moving from group to group until I joined a group with three Dynamo riders and smattering of other clubs. That split up again on Box Hill but I regrouped with the Dynamo riders back on the flat and group of five of us sat at a comfortable pace round to the base of Box Hill again.

On the third ascent I managed to pull out ahead of the Dynamo riders. On the descent I went into the Zwift Super-Tuck and grabbed a rest. The group of Dynamo riders caught up with me again in the tunnel coming back into the London section. I stuck with the Dynamo riders going around the flat section watching to see if there were any faster wheels to follow. This was now the pack I’d decided I wanted to see if I could beat, especially the one other category C rider in the group.

On the fourth ascent of Box Hill I again pulled out ahead with one of the category B Dynamo riders following close behind. By the top I had a 40 second gap on the Dynamo cat C rider, and 8 seconds on the closest one. The closest Dynamo passed me on the kicker as I let off a little, so I decided he was my new target and put in a spurt to try and catch him.

Then as we descended for the last time I was merrily listening to the commentary when I heard my name. That’s nice I thought as I took the opportunity of the rest on the descent to tune into what they were saying. It turned out I was leading the cat C race and the Dynamos were working together to try and bring back their cat C rider for the win.

When I hit the flat I tried to hold a steady effort through the tunnel to the bottom of the escalators – not too hard that I couldn’t latch on if the Dynamo group caught me, but not too easy to make it simple for to make the catch. By the end of the tunnel the Dynamos had cut my 40s to less than 10. I had a feather-weight power up which I hit on the climb and upped the effort. That pulled the gap back to 15s and as a bonus I passed the Dynamo rider who had overtaken me on the Box Hill kicker. From there I just had to hold on. I ‘sprinted’ (I don’t really have a sprint) the last hundred meters or so. That turned out to be the biggest shock for the family who had been sat watching some movie having a lazy Sunday morning while dad rode his bike indoors yet again. They didn’t even know it was a race.

You can watch the whole race on YouTube, but for the best bit go here. It must be good, after forcing my daughters to watch it, one of them asked to watch it again. Must be immensely proud of her dad’s achievement – or it was a good excuse to stay up a bit later.

The format worked well, better than expected. Having the live commentary was great. It was inspiring to see the likes of Neil, Seb, Alice and others baring ‘KNG’ mixing it up at the front of the race, or even just up the road. Next time I might just sit back eat cake and watch them. Might! Probably not, I sure I’ll be having another go.