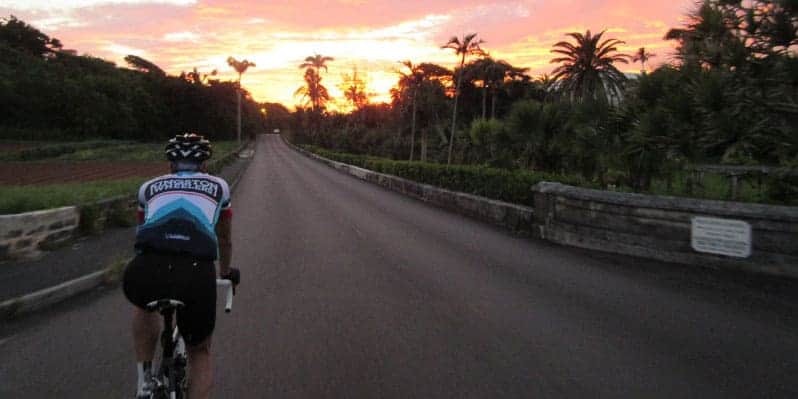 Maria and I were heading to Bermuda to visit our friends Erica and Phil who have just had a baby. We have been once before to visit a number of years ago but went in November to watch the Rugby Classics. The weather wasn’t very clever then with lots of rain and wind but this time it would be mid August, the hottest time of the year. We were going to take our bikes to get some training in, the island is quite small but the terrain is rolling with short sharp hills. Maria had made contact with a number of bike shops to check out the cycling scene and we were informed that all rides went early to avoid the traffic and the heat.
We headed out on the training ride on Saturday morning. 5:30am rise for 6:15am meet, luckily only a few km’s from where we were staying. We hooked up with the meet and it would be a 55km ride to the Dockyards and then apparently everyone just attacks each other and on the way back. Bit different to a training ride we were used to but the 30+ group rode with good manners and it was pretty good fun racing around on the quiet roads. Afterwards we headed to a nice cafe and had a good chat with a lot of the riders. Everyone is super friendly and were made to feel very welcome.
The cycling culture is quite big over here, a number of bike shops have teams as do some companies as well. They have a league of different levels and the competition is fierce for the kudos of winning the league. There is also a number of younger riders coming through who were very strong and have ridden in the junior championships around the world. One having just got silver in Santiago at the Junior Caribbean Cycling Championships. So the standard isn’t bad at all at the higher levels on the island. I was invited to race the next day as the licensing is a bit more relaxed, although I did have my BC license with me, you never know when it will come in handy. I was a little reluctant to race as I’ve been injured the past 3 months and the training ride I had just done was my first hard ride in that period.. so hardly in race shape. Still you don’t get to race often abroad so I though I’d do it anyway. What is the worse that can happen, I’d be dropped.

So the next morning we head up to the north part of the island to Clearwater Beach where the race was being held. It is a little different heading out here as we ride up the island and the sun is rising to a beautiful sun rise over the Atlantic. A 22km ride with Maria taking it easy as it is her easy day ride, plus I’m doing all I can to save the legs after a training ride the day before. Big shout out to Erica (plus Taylor the baby) who came along to support me as well, both their first time watching a cycling race.
We go there with plenty of time and I spoke to the organisers, Bermuda Bicycle Association, who were more than happy to let me race with just the added cost of a $10 day race license and the usual race fee. I was asked about how much racing I did and I was lumped in with the Category A group, the fastest…. despite my injury protests… Timing chip on the forks and some locals in one of the teams offered to take me around the course for a reccy. I was very glad of this as it turned out to be pretty technical in a couple of places with some very tight bends, which will be taken at high speed. The course was a shade over 5km and we would be doing 11 laps, so something like 58km which isn’t that long by recent road racing standards back in Surrey. 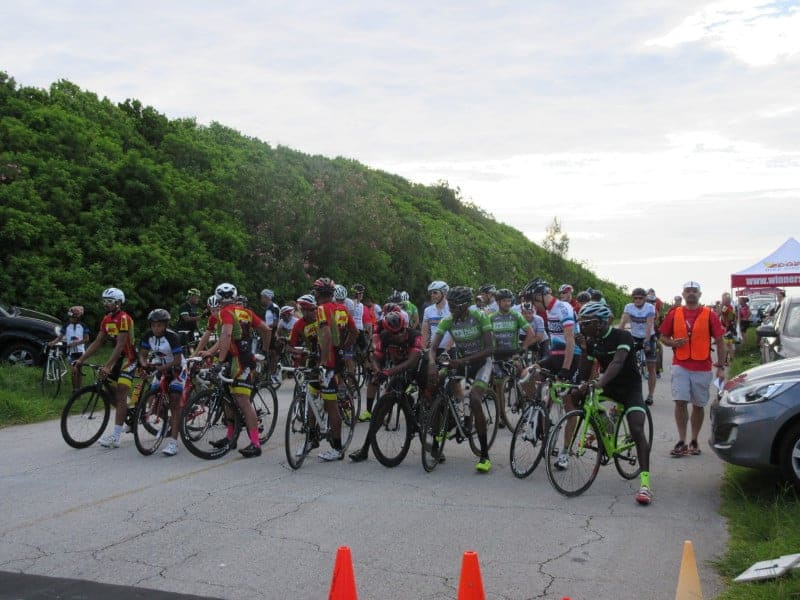 We lined up at 8am and had the usual safety briefing. There was a number of groups going out at 3 minute intervals. Cat A – C, women and juniors one after another. After the briefing we were off, as it is August a number of regular racers are away on holiday and some don’t race as it is pretty hot this time of year. In the Cat A group we had about 15 starting but the B and C groups were much larger. Straight from the off attacks came in thick and fast, this is not so unusual in the road races I have done and these are usual charged down but it is less effort as we usually have 60+ riders in a race.
It is worth noting at this point that Bermuda isn’t that flat, it isn’t hilly either really but very rolling. The “hills” are very short but can be quite steep at 10-15%, this means the locals, when out riding, do lots of mini intervals on every ride making them pretty good at sprinting and making gaps. I discovered this on the training ride we had done the day before. Apparently this is the racing style is USA, which means people just attack none stop, makes for a surgy ride.
We are racing… I’m happy enough, my corning is fine on the very tight fast corners even with a bit of loose stuff on the road. Funny how in a race a bit of extra caution you usually show when riding goes out the window, so you don’t lose that wheel in front. The attacks kept on coming and people were getting away in pairs but I was happy enough to see them dangle out there 150m down the road, they wouldn’t stay out for the race. First half of the race, I was happy to work and take my turn on the front but after a number of efforts everyone was happy to leave me out there working and not take their turn… This was fair enough, lone racer with no team affiliation, leave the bugger do all the work, so decision made, I was there to finish and sat up and sat in for the last part of the race. 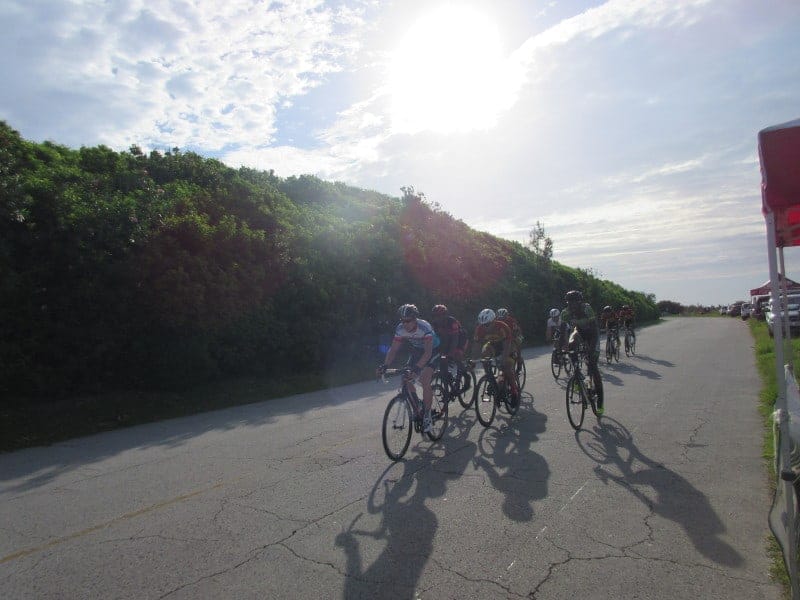 The attacks keep coming all the time, I was starting to get a little tired and there was still 4 laps to go. The legs were getting a bit tired after all the surges of not just the attacks but the tight bends and little climbs afterwards. I was happy to keep clinging on in mid bunch and keep going, the group was thinning out a bit and at the bell we brought the last break away in, which had been out there for a while. The final lap a number of half breaks were attempted to go, just to wear what was left in my legs. As we hit the last roundabout for the run in to the finish line, about 200m down the road I sit up as I’m not bothered to contest the sprint and roll in a few metres behind the sprinters. The rest of the Cat A guys roll in well behind me in dribs and drabs as they had been shelled out over the last couple of laps. I remembered to get my 40th necklace (in joke) out for Maria to photograph.
I spent a bit of time chatting with a number of guys as everyone is so friendly and I also took the time to thank all the teams and organisers for allowing me to race. Whilst Kingston Wheelers would welcome guests to join a club ride, racing in the UK is strictly regulated by British Cycling and without a BC license or UCI license you wouldn’t be able to race, so I was very grateful to be allowed to ride in a well organised and safe race, so kudos to them and all the marshals who make it all possible for all.
We had a reservation for brunch at 11:30, so we say our farewells and Maria and I ride back to our apartment to get showered and over to the restaurant which isn’t far from us. The 22km ride back is a bit more rolling that I would like on my tired legs. It shows how friendly it is here in the cycling community and Bermuda in general as I had done one ride and one race and everyone was hang out the window in the car as they past us, cheering and shouting!!
It isn’t really a cycling destination to be honest, you wouldn’t come here for cycling on it’s own but it has been a great place for us to bring our bikes. We have cycled everyday, Maria is training for races back home in her push for points. We have bumped in to a lot of the new cycling friends we have made and it has been really good. The have a very vibrant cycling scene here and the “older” guys really are helping bring through the young riders which is great to see. There is also good support for racing at all levels of ability in the senior ranks but also very young riders as well.
So I might not miss the 5:30 alarm to get out in the morning to beat the heat this time of year but I will miss a number of people I have ridden with and raced with over the past week. They have welcomed Maria and I with open arms, I hope anyone visiting our corner of London will get to enjoy the hospitality of a Kingston Wheelers club ride.