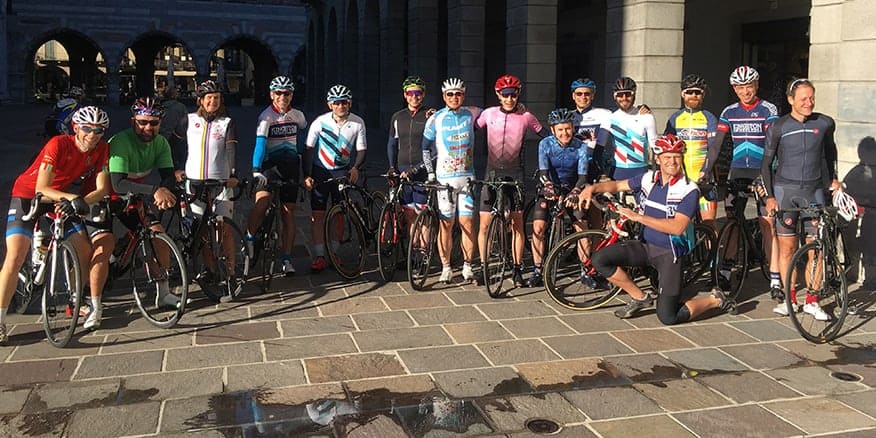 On 6th October a group of Kingston Wheelers travelled to Lake Como for Il Lombardia, the Classics Monument that is also known as the Race of The Falling Leaves. The trip took on an unexpected significance when our dear friend Maria Thompson who organised the trip tragically passed away in mid-September. With heavy hearts, and urged on by Maria’s husband Dai who was also due to come, we took the decision to continue with the trip and ride in memory of Mazza. 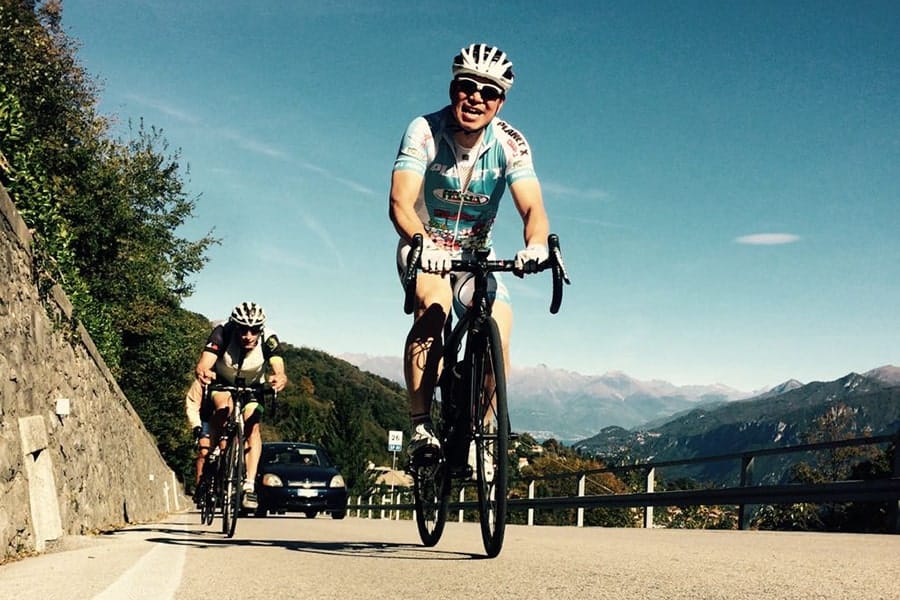 The group met on the Friday, the day before the pro race. Adam and Harry had arrived earlier than the rest and went for an afternoon ride to check out the infamous Muro di Sormano, which the granfondo route would be taking in. The weather was nice and sunny, with temperatures in the mid-20s. A far cry from the grey autumnal London. Later that evening the rest of the group arrived bringing us to 17 in total. We went for a late dinner in Como followed by gelato, which kept Marc Handford quiet for a few rare moments whilst stuffing his face.
The following morning, we had a leisurely late start and then rode out as a group to the Madonna del Ghisallo, a chapel dedicated to fallen cyclists that sits in the hills above the beautiful village of Bellagio. There was talk of saving the legs for the granfondo the next day, although Adam and Ed seemed to have other ideas on the climb! At the top James got some excellent photos of the group ascending the hill, including TY in his colourful Planet X kit. After some time reflecting in the church and group shots by the cycling monument, we came back down the other side and home via Asso. Around 75km all in. 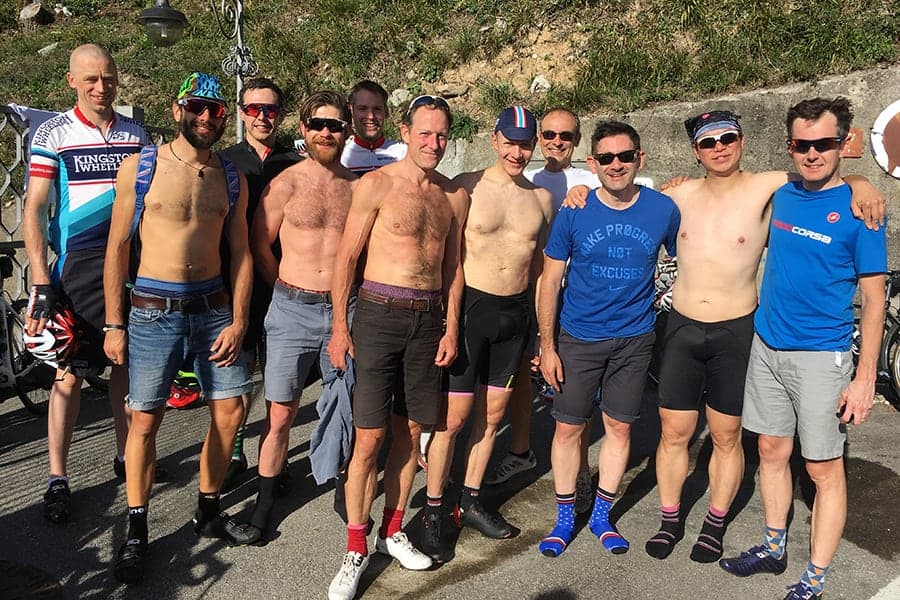 After heading into town to pick up rider numbers for the granfondo, we headed to the lake front for some lunch and more gelato before getting ready to watch the pro race. Having done a longish ride in the morning we decided to head to the local climb, Civiglio, to watch Il Lombardia. This is where Nibali attacked in 2015 to win solo and we were hoping for similar fireworks in this year’s edition. We started the climb with none of us really knowing the profile, turns out it’s fairly tough! Having gone riding in civvies, many of the group were stripped to the waist doing the climb, causing lots of amused looks with the tifosi already lining the route. We found a decent spot about half way up and waited for the race to come through. After about 30 minutes the bikes arrived and then the first group of riders, containing all the major contenders including Nibali, Uran and Quintana. We gave the riders plenty of encouragement from ‘Wheelers Corner’, had a few bottles chucked our way, and even made it on Eurosport! The race was strung out and a took a while to come through, after which we descended back down the hill and got ready to head out for dinner. We enjoyed pizza and toasted absent friends before heading to bed for an early night before the granfondo. 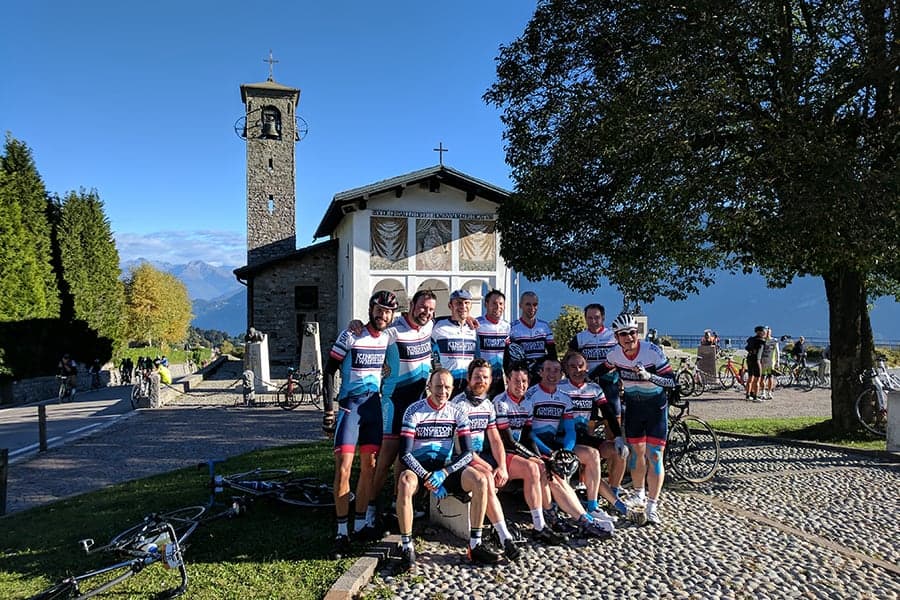 On the Sunday we had a fairly early start, but nothing crazy compared to some events, leaving the house at 7am to head to the main square. Como is all fairly compact and we were lucky to have a very central apartment thanks to Mazza’s organisation. The previous evening TY had made a plan for us to ride as a group together and leave Mazza’s necklace at the chapel when we arrived at the Madonna del Ghisallo. In usual Italian grandfondo fashion the start was fairly frantic and we found ourselves fairly split up, so we all pushed on in our individual groups and gathered together again at the Ghisallo just over 50km in. Harry and Declan were the first up to the top and by the time the others arrived, they were being interviewed by Ciclo Turismo, an Italian cycling magazine. When everyone had arrived we headed into the chapel and TY hung Mazza’s bracelet on the wall alongside other effigies of fallen cyclists. A sad but beautiful moment that we will all remember and look back on for years to come. Back outside we took another group shot in front of the statue, with everyone in full Wheelers kit.
Following the memorial the group rolled out and descended down for a short period towards the Muro di Sormano. It is a brutal climb of 2km averaging 17%, with sections that hit 27%. There had been a lot of talk about gearing before the ride and it’s safe to say that nothing is enough. Ed Francis did the ride of the day, with his 36-25 gearing forcing him to go hard all the way. Most of the group made it up without putting a foot down, with just a couple of walkers who won’t be publically named (initials LP and LM)!
After the Muro it’s a very technical descent back down to the shores of the lake. Our road captain TY had given us the heads up yesterday to take care as several pros had gone down with nasty injuries on this descent. Back at the lake it’s a rolling run in back to Como before the ascent of the day, the climb to Civiglio. It’s not the hardest climb of the day, but after the Ghisallo and Muro you can really feel it in the legs. The pros did an additional climb, San Fermo della Battgalia, which was cut from the grandfondo to ease traffic congestion in Como. It was a shame not to do the full route, but we weren’t complaining on the final climb. 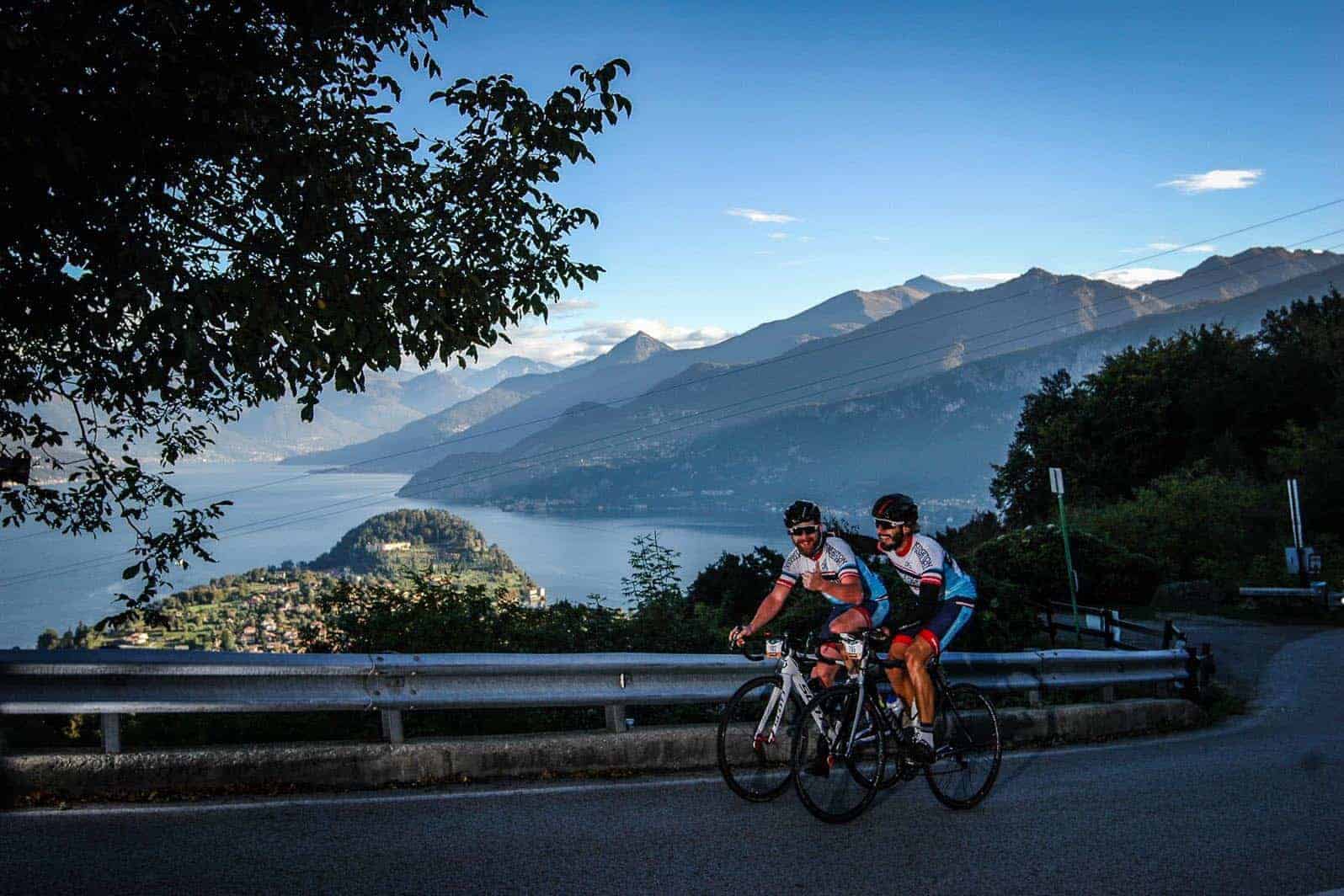 Harry was the first Wheeler back, followed shortly after by Declan and Ed. The big surprise of the day with Marc Handford coming back 1 hour ahead of the big hitters TY and James Whit, who were enjoying the sceneries and taking group photos with Mark Bennett and Richard Leishman along Lake Como. This lead some of the group to question what Marc has been having with his gelato recently. There was an excellent pasta and beer party on the shore of the lake where we all met up and several jumped in the water, making the most of the summery weather in early October.  In the afternoon, the group sunbathed on the terrace at the apartment, sharing a later ‘Italian’ tea composed of cured meats and squid, focaccia, and lots of beer and wine.
That evening we headed to a Sicilian restaurant for late dinner, refuelling with pasta and pizza. Rich Haigh managed to blag everyone limoncello after the meal, which was followed by yet another ice cream. Although it turned out to be the first gelato for Mark “race preparation” Bennett. Back at the apartments we polished off the last of the wine and amaro that was knocking around, telling stories and remembering good times with friends.
It was a bitter sweet weekend. We were sad to have to say farewell to a close friend too soon, but it was a fitting tribute to Mazza, done in the only way she would have expected.

“WTF TY, of course you guys have to go! I did so much work organising this trip!”  Stunned by her sudden passing but with Mazza’s voice ringing in our heads, we debated whether to cancel.  The group made the last minute decision to ride Lombardia in memory of our fallen friend.  After all, Mazza would not have had it any other way.
Maria Thompson, well known as Mazza in the club, was a consummate Wheeler and had a love for cycling that was infectious. Generous in spirit, boundless in energy, fearless in determination, funny in nature, Mazza
never shied away from a challenge on a bike. Whether it was riding across America in all sorts of weather or through Alaska being chased by swarming mosquitos, Mazza did it. Barely hanging on last-man(woman)-standing Saturday rides or cycling in the backroads of Malaysia with tummy issues, Mazza was there.  In fact, Mazza was always there. Racing? Mazza got to Cat 2 and raced in national races. Mountains? Mazza was a top woman finisher at the Maratona dles Dolomites and did the Marmotte in 40 degree temperature. Classics?  Mazza rode and killed the Monuments. Club volunteering? When did you ever not see her famous Malteser cake at any Wheeler sponsored event, or her smiling face behind the food service counter? Need a lift after TT or hill climb? Just ask Mazza. She’s got a van. Want someone else to organize a road trip. Get Mazza. She will sort it all out. Someone said that her passing has left a hole in the lives of everyone around her. How about a hole the size of the Grand Canyon? That Mazza, that wonderfully funny and crazy cycling Mazza, was taken away from us all too suddenly. For some of us, saying our goodbyes to Maria at the Ghisallo chapel among the falling leaves, majestic hills and clear waters of Lake Como, on a trip she organized to perfection, was both healing and, well, just right.
As Javier reminded us, in a recent email from Mazza where she complained about James Whit closing down a summer party earlier than she would have liked, “What the hell? You kicking us out at 7pm? What happened to drinking until late and dancing in the moonlight?!” Mazza1canobi, you left the party too early and we all miss you. 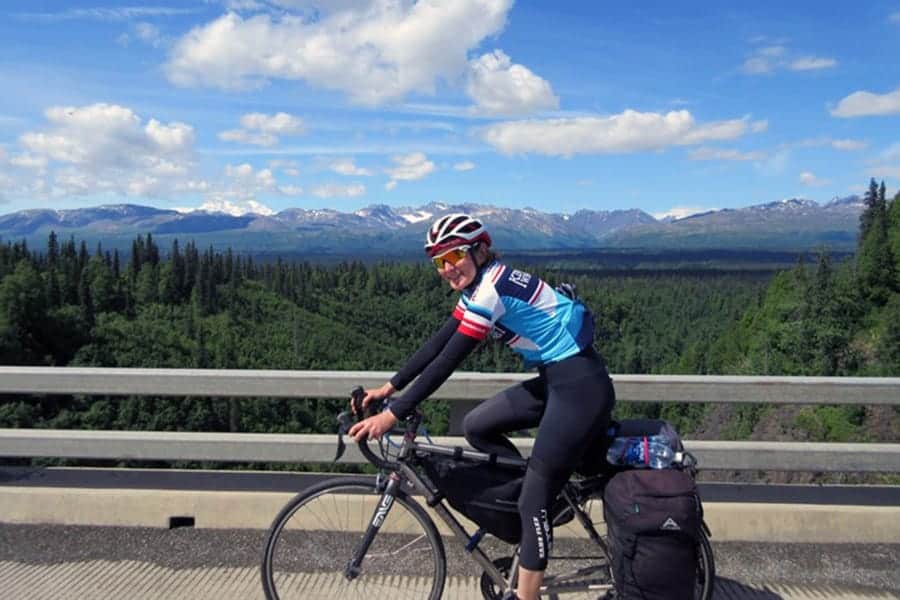