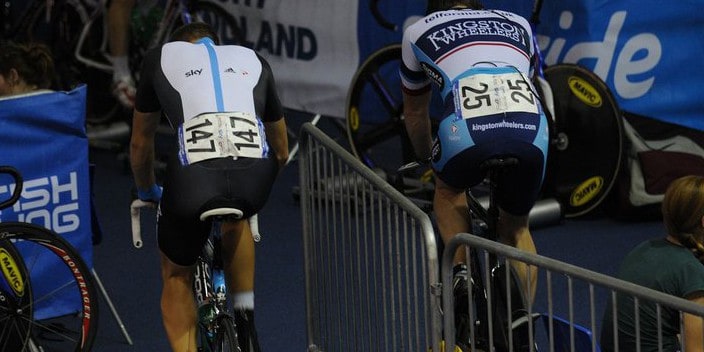 So it had finally come round, the event that I had been looking forward to all year. I really had no illusions or expectations going into the event, all I wanted to do was to gain some experience and ride in a major competition with some of the best riders in the world – what a privilege!
As I arrived at the velodrome the day before my first event I suddenly became very aware that this was going to be the first time that I had ever raced on an indoor velodrome (I’m not sure that the 40-lap race at the KW Newport track weekend counts, this was clearly going to be a very steep learning curve.
After grabbing my accreditation and helpers pass I made my way straight into the bowels of the velodrome, underneath the track and into centre to watch some racing and start soaking up the atmosphere. The track centre is an odd place with various barriers erected into great metallic paddocks for people to pick out their warm up area on a first come-first serve basis (by the end of the champs everyone generally stuck to the same place day in day out). Another part of the centre was left completely empty for riders to turn their legs over whilst circling a table of Gatorade like unnaturally smooth, Lycra-clad, carbon-fibre riding vultures, with a final area set aside for Commisaires, officials and measuring equipment for checking bike dimensions.
Because of the nature of track racing in the UK (only having two international standard indoor velodromes) it’s quite a small world with many familiar faces and recognisable names. This became quite apparent when entering the track centre on day one to find Miles Anon and Miles Stovold (Team Terminator) warming up for the Team Sprint, Emma Williams (Twickenham CC) getting ready for the 500m TT and eventual Points winner Corrine Hall (Team Corridori) chatting to her partner before the Madison. Seeing all the Herne Hill and Reading Velodrome locals suddenly made me feel a lot more at ease with the whole situation, perhaps I do deserve to be here?
I then turn my head and look two feet away from me to a swarm of people all wearing BC clothing whilst furiously studying laptops and iPads. Oh that’s Iain Dyer, the GB Olympic Sprint Coach, Jan van Eijden, another sprint coach. Two more feet to a group of very familiar looking riders all on plain black bikes, effortlessly spinning on rollers wearing blue and black kit. It was the Sky Track Cycling Pro Team of Peter Mitchell, Matt Crampton, Ross Edgar, Jason Kenny and some bloke called Sir Chris Hoy. This is clearly the other end of the spectrum. Also present was a very serious and stern (almost mean!) looking Victoria Pendleton demonstrating how quickly she can sprint on the rollers before comfortably retaining her 500m TT title.

Bizarrely I couldn’t wait for this race. Most people dread the kilo because of the extraordinary amount of pain that is suffered in such a short space of time. I set up my camp in exactly the same place as the previous day, right in the middle of team GB. After spending a bit of time tinkering with my bike changing my bars to the TT setup, a voice out of nowhere asks “Getting ready for a bit of Kilo pain then?” Its GB sprint coach Jan van Eijden. “When is it not painful?!” I reply. We get chatting and he asks me my expectations of the event where I explain that I’ve never done a proper competitive time for the Kilo before, the only thing that came close was the 1.15 I did with the Wheelers at the Newport track weekend!
After sign-on the riders are seeded by what times they have set in previous events, as this is my first time I know that I’m going to be one of the first riders off, it turned out I was second. 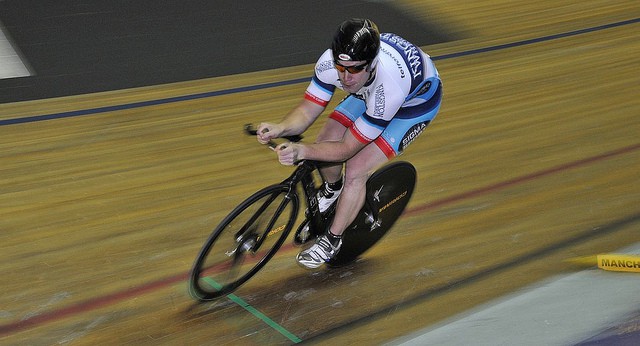 I went to get my setup
measured by the officials to make sure that the bike was UCI legal, a heart stopping moment occurs when there is a discrepancy between the distance of the bottom bracket and front axle but eventually all is well. A quicker warm up than I would like and brief motivational chat from Jan van Eijden and its time to head over towards the starting area. This is one of the loneliest places in the entire velodrome, sitting down bike in hand ready to give it to the starting official in the precise position that you want it for your attempt. I’d spent the previous night constantly visualising every single aspect of the race, right from the practicalities of getting on the bike whilst in the starting gate to the feeling of the final bend of the final lap – this solitary time was a chance to go over things one last time.
Once in the gate and the starter had checked that I was ready, 11 seconds were flashed up on the clock. The beeps started, 10 seconds to go. Deep breathing, silence. 5, 4, 3, 2, stand up and forward right over the handlebars, 1, shift all weight back, arms straight and backside over the saddle. 0 throw all weight and energy through the core, hips into legs and then the pedals. Lock arms, pull through the hips and resist the urge to rock the bike from side-to-side. With commitment, pull away from the gate driving everything through each pedal stroke, breathing in time with every revolution.
After the start, I don’t actually remember much of the race. The only thing that really sticks in my mind was crossing the start/finish line for the bell lap, my legs absolutely burning and feeling like they were a creaky, rusty old machine. No matter how much I tried to convince them to speed up they had clearly gone on strike! I stopped the clock at 1.10.469 (51.08km/h or 31.73mph), nearly 5 seconds quicker than I have ever gone before. For that very brief moment in time the scoreboard read: Open Kilometre TT 1. John Coolahan KWH 1.10.469. If only I could stopped it there with Kingston Wheelers leading the competition! After 3 laps of trying to slow down I made it back to warm up area where I collapsed and had to lie down on the floor with my feet on a chair. Jan would then come over to me: “great start, but here’s where you can improve…” I was now getting free coaching advice from the GB team! Apparently I sat down to soon down the back straight meaning I never quite got ‘on top’ of my gear enough so I could have potentially gone quicker. You’re always going to die off in this event, it’s just a cause of whether you slow down from 60 or 59km/h that makes all the difference. An agonising wait then ensued as all the other riders posted their times. Eventually I had to settle for 12th overall, only 2.2secs off a bronze medal. The event was won by Bruce Croall (City of Edinburgh) in a storming time of 1.04.909.

I woke up feeling pretty rough from the previous evening’s efforts. Warming up on the track I did a couple of efforts at 75% to ensure that I was taking the correct line (believe or not Manchester and Newport are actually shaped slightly differently) and that everything was ok with the bike. I set up in my usual spot with Jan cheerfully coming over and enquiring as to what I was expecting to do. The fastest ever time that I’ve set for a flying 200m was once again with the Wheelers at Newport doing a 12.28, I was aiming to get pretty much bang on 12.00 or less, hoping that it would be enough to qualify for the finals.
I decided to do one more effort before it was time to get off the track. With sprinters all over the place it was quite hard to keep track of where everyone was and what people were doing but every now and again you’d see somebody dive down off the banking and absolutely rocket round the track. I did my final effort but some reason it felt different, a little bit quicker for some reason. As I swung up it turned out that Sir Chris Hoy was rather rapidly coming up behind me… Back on the rollers to keep the legs ticking over and the start list came out. Once again, being my first championships meant that I would be one of the first few riders off; I think I may have been about fifth or sixth so it gave me quite a good opportunity to look at people’s technique and also the etiquette of starting the event.
The flying 200 is a way of seeding the sprint. Every rider gets three and a half laps to get up to speed and post their time. Whilst the previous rider is posting their time, you’re held up by an official down the back straight who then pushes you onto the track as the rider crosses the line. For something a simple as doing 200m as quickly as you can, there really is an art to setting a quick time, from the speed that you enter the final lap with to the angle that you come down off the banking. I posted a time of 11.701 (61.53km/h or 34.46mph), over half a second quicker than my PB. The fastest time was set by Hoy in 10.233 (70.36km/h or 43.98mph). Unfortunately setting a PB wasn’t quick enough to see me through to the finals so for me it was championships over.
The whole experience and atmosphere of the championships was absolutely phenomenal. One thing that really struck me was how friendly all the competitors and staff were right from the receptionists at the velodrome right up to multiple Olympic gold medallists! Big thanks have to go out to various people, all of the Kingston Wheelers who have encouraged and supported me leading up to event. Wheel builder extraordinaire Rob Pennel for letting me borrow the base bar for the Kilo that made such a difference.
Massive thanks to Steve Wright for the loan of the Corima disc and 4-spoke, I don’t know where I would be without those, going slowly I’d imagine! Probably the biggest thanks have to go out to Natalie for looking after me over the event, helping shift all the equipment about day in day out as well as keeping me calm and sane over the entire championship!

Getting back from the champs on the Saturday I decided to race the final Omnium at Herne Hill on the Sunday. A small field turned out and I decided to take my experiences from the Nationals and try a couple of different things. It worked well as I took first place in the Scratch race, 3-Lap Sprint and the Elimination race and a second in the Points, winning the Omnium overall. It was a good event to end the season on and am looking forward to racing at the nationals again next year with more than 5 months training and another years experience!