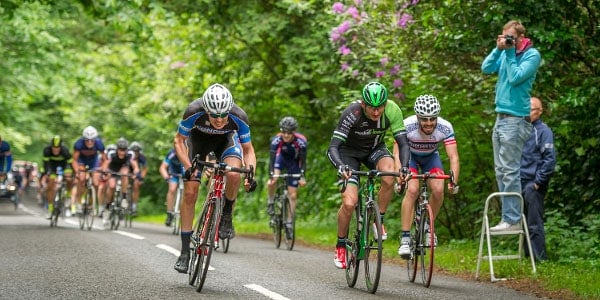 Last Sunday a team comprised of Alex, Dai, Harry, Pete and T-Y took part in the Surrey League Cat 3 road race at Cutmill, organised by Farnborough & Camberley CC. It’s one of the hillier Surrey League road circuits with a double ramp up to the finish line. Pete and Harry raced this course back in April in the Cat 2/3 race and had unfinished business after getting dropped in a fast and furious race, which saw many strong Cat 3 riders shredded by the peloton.
As we arrived at the race HQ at Elstead Village Hall at 8.30am it started to rain and felt considerably colder than the 18 degrees promised by BBC Weather. At this point some of the guys were regretting not bringing arm warmers. After signing on and warming up, we headed back to the Hall for the marshals briefing, who advised there were quite a few pot holes in the course, marked out on the road.
The riders assembled to start at 9.30am by which point the weather had started to warm up and the roads were drying out after the light shower. A full field of around 60 riders started out behind the comms car, with big team showings from Paceline and London Dynamo. As the car pealed off the pace ramped up and we gritted our teeth to prepare for the typically hard and fast first two laps.
Before the race could settle down, we were stopped on the first lap when the plastic cover fell off from the lights on the top of the comms car into our path, which someone rode over, but luckily didn’t come off. The race was neutralised then we were off, soon coming up to the hill and testing out legs (with 7 reps total in the race).
As the bunch headed up Fulbrook Lane a second time, a rider at the front looked back to see if they had opened up a gap and drifted off his line, taking down two other riders. One went over the bars and had a very heavy fall, so again the race was neutralised and brought to a halt as the ambulance saw to the fallen riders. We waited around 20mins before setting off again, by which point two laps were cut from the race bringing the total to five (and three to go).
Alex had a good attack with two to go, but came back to the bunch leaving Sam Andrew of Paceline and a London Dynamo rider out front. They were caught with one lap to go as the bunch crossed the line and it was all back together for the final lap. There were a couple of attacks, which Dai helped to chase down making way for a sprint finish.
As we approached the final hill we held our position near the front, keeping an eye on Paceline who were protecting some their climbers. Geoffery Lulham (private member) went early, then James and Gareth Thomas of Paceline made their move followed by Harry leading up the bunch. The solo attack went all the way for the win, proving to be a beautifully timed move, with James and Gareth finishing 2nd and 3rd. Harry managed to grab 6th place, just getting out sprinted by a big Pedal Heaven rider and Pete followed soon after in 7th. Great result to have two Wheelers in the top 10 and score their first points of the season.
Big shout out to Farnborough & Camberley CC for putting on the race and doing a good job. Only gripe was no coffee & cakes at the race HQ, as they didn’t have enough volunteers from 250 club members. It makes you appreciate that our club puts on such well supported events, which is all down to volunteers and participation.

Despite losing a number of racing members to more race team focused clubs last year, we’ve had a number of new younger rider join the club who have jumped in to racing with two feet. A number have had a good success on the criterium circuits to go from Cat4 to Cat3. On the road racing front we have had a good showing from some more experienced members, with a number of top 10 placings and had a good team ethos where everyone has worked together to help team mates in breakaways, blocking and chases. Andrew Davis had a good start to the early season to gain his Cat2! On the Women’s front both Emma Flattery having a strong start to the season just missing out on the podium for the winter series at Hillingdon; and Maria Thompson showing good mid-season form with a 2nd and 3rd placing in the Dunsfold series.
Kingston Wheelers have had a good start to the season with a number of promising new members stepping up and some more experienced members starting to show good form. Long may it continue for the rest of the year.