The Borders of Belgium 2016

On the 1st of September Richard, Gavin and Dominic rolled into a carpark in Wachtebeke, Belgium to sign on for the 1,000km ride that would quite literally take them around the whole of Belgium.

Just after 2pm we (Dominic writes) set off in a group of about 70 riders into a stiff headwind towards the first control 143km away in De Panne. After numerous traffic lights, sections of cobblestones, and traffic furniture the ‘peloton’ thinned out. Richard preferring to ride with the fast group, Gavin preferring to take it easy, and I was somewhere in the middle.
The wind was unrelenting and after an hour or so of riding on the front with no offers of help from the guy sat on my wheel I decided to take a “wrong turn” at the next roundabout. It was here that I bumped into Gavin and we rode the remainder of the route into De Panne. In Zeebrugge (80km) we stopped for a bite to eat and in the process made ourselves last riders on the road. After our coffees and as the sun set we continued on through the industrial north and arrived in De Panne sometime around 10pm.
After more food and coffee we headed into the night towards the next control in Houyet, 300km away. Along the road we passed through The Menin Gate Memorial at Ypres, and at the 300km mark (5:30am) were feeling rather tired so we stopped in Hautrage for a nap in the village square. I opted for the park bench and Gavin went for the bandstand.
With only an hours sleep we set off in search of coffee and had our prayers answered 10k down the road in Dour where we found a boulangerie with indoor seating. From here the roads began to roll and we soon found ourselves in the Ardennes; with a noticeable difference in landscape and terrain at Heer. There was a control at Houyet (452km) and whilst I picked up a can of Jupiler and had my brevet card stamped Gavin went in a futile search for coffee. Thankfully we found a place just over the next hill where we cooled down with more Jupiler and coffee. It was late afternoon and we were both flagging in the heat and desperately needed a proper stop. 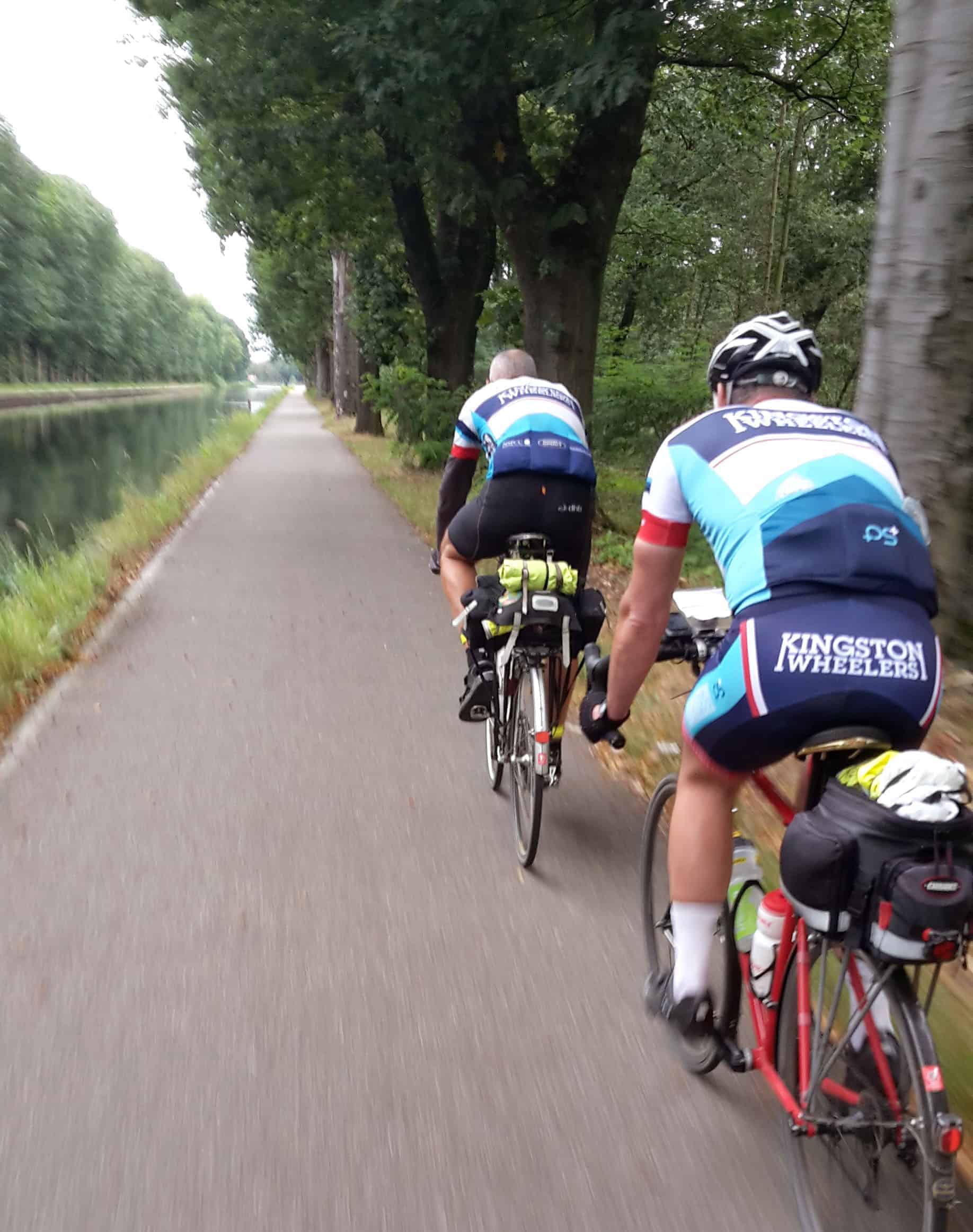 Through the rolling hills we rode with two very strong Belgians, one with a climbers build and the other looking like a rouleur. After about an hour or so they dropped us on a descent and we never saw them again. It was at this point that the sun began to set, so we took it easy for the next 100k to the sleep control in Habay where we bumped into Richard who arrived half hour before us. It took 563km but the Kingston Wheelers “Team” were together again.
Each of us opted for the organiser’s “taken care of” option and so we were given our own room to sleep in, which by Audax standards is four star treatment!
At about 5am we headed down for breakfast and then hit the road at 6am for the second part of the Ardennes. The sun greeted us at 7 and uncovered splendid views of a countryside with pine trees, fields with cows and sheep grazing, and the occasional church spire.
Bastogne marked the 600k point and after doing a circuit of the town we found another great boulangerie for our second breakfast. From here it was a straightforward ride out of town along a disused railway line. After Sankt Vith we negotiated some roadworks (I thought I’d be clever and avoid the organiser’s advice) and in the process bumped into Alex, an ex-wheeler who promptly dropped us on the next climb.
At 714k there was a control at the quaint German town of Monschau. Being a Saturday it was busy with tourists but we managed to get a table and ordered some bratwurst, sauerkraut, mashed potato and beer. It was worth the wait.
From here the terrain gradually levelled out and at Visé (782km), after a couple of lumps we used canals for the night time ride to the sleep control at Lommel (860km) where we arrived just after midnight.
The following day was a more relaxed affaire. We had about 11 hours to cover 140km with only one control at Turnhout (904km). So we had plenty of time in hand which allowed us to dodge a heavy rain shower, do a spot of site seeing in Antwerp (955km), and stop for more food. The weather gods repaid our complacency with a stiff headwind that didn’t subside till the very end. We arrived at the Arrivée with 2 hours to spare, and all that was left was the 57km ride to our hotel in Bruges!
The Borders of Belgium was a great event that should appeal to most long distance cyclists. Unlike PBP there is no need to qualify for it and you could even EOL. Look out for it in 2018.