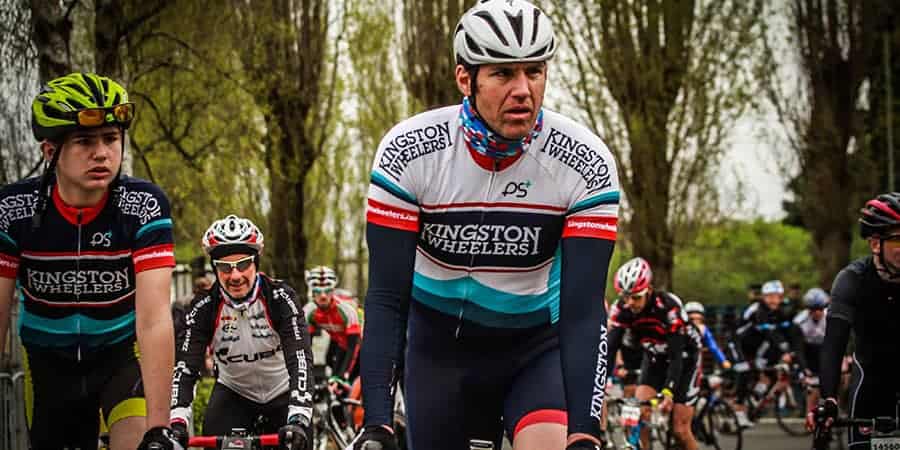 On the 1st April a group of Kingston Wheelers headed to Belgium for the Ronde van Vlaanderen cyclosportive, the day before the pros take on the legndary cobbled classic. Hans Stiles reports back from the action…
Each year, a significant number of KWCC members descend upon Oudendaarde, West Flanders, to take part in the Ronde Van Vlaanderen Sportive. I’ve ridden the event twice and decided that this year, I would encourage my 13 year old son, Max, to join me. The prospect of a long weekend away from home, mountains of food and the promise of a pretty easy ride with just a couple of small hills was enough to convince him. I bagged a nice looking place on Airbnb, only 5km from the centre of Oudenaarde. Fellow Wheelers Phil Barella and Barry Hyde were happy to join our group and we all sat back and waited for entries to open so we could sign up for the 141km route.
I spent the weeks before the event building Max up to longer and tougher rides with a couple of trips out to East Surrey and the North Downs. He was soon making reasonably light work of the likes of How Lane and Hilltop Lane and we were all set.
On the morning of 31st March, Phil and Barry convened at mine to load up and head off to Folkstone when potential disaster struck. One of the straps of the bike rack had vanished and there was no way we were going to risk 200 miles of motorways traffic. Not to be deterred, we pushed the back seats forward, removed the parcel shelf, took the wheels off the bikes and found, to our amazement and relief that all four bikes, but we wouldn’t be hanging about.
75 minutes later, we were at Folkstone, grabbing a quick healthy(ish) breakfast and, less thåan an hour later, we were rolling off the train in Calais. We reached the outskirts of Oudenaarde by midday, stocked up on food and Belgian beer at a local supermarket and reached our digs before 1pm. After a brief lunch we changed, checked the bikes and headed off to town. Our plan was to hit a couple of climbs, in particular the (in)famous Koppenberg minus the crowds.  Cycling in Belgium is something of a culture shock; the infrastructure is excellent and the drivers friendly and courteous. It’s certainly a world away from the UK.
We cycled onto the cobbled road approaching the Kopppenberg to see a rider ahead topple over on the steepest part of the climb. I told Max to look out for the clearest path over the cobbles and pushed ahead. Max and I totally misjudged the approach and both ended up having to jump off quickly, push our bikes for a few metres then remount as the road started to level off. Arriving at the top somewhat aggrieved, we both turned round, descended carefully (definitely an experience!) and tried again. The second attempt was far more successful.  We then rode back into Oudenaarde, picked up our entry packs and headed back.
The weather on Saturday morning was suitably Flandrian; a bit cold and wet but, thankfully, not that windy. We left our digs at around 7am, rode the short trip into town, passed under the timing gate at around 7:30 and we were off. 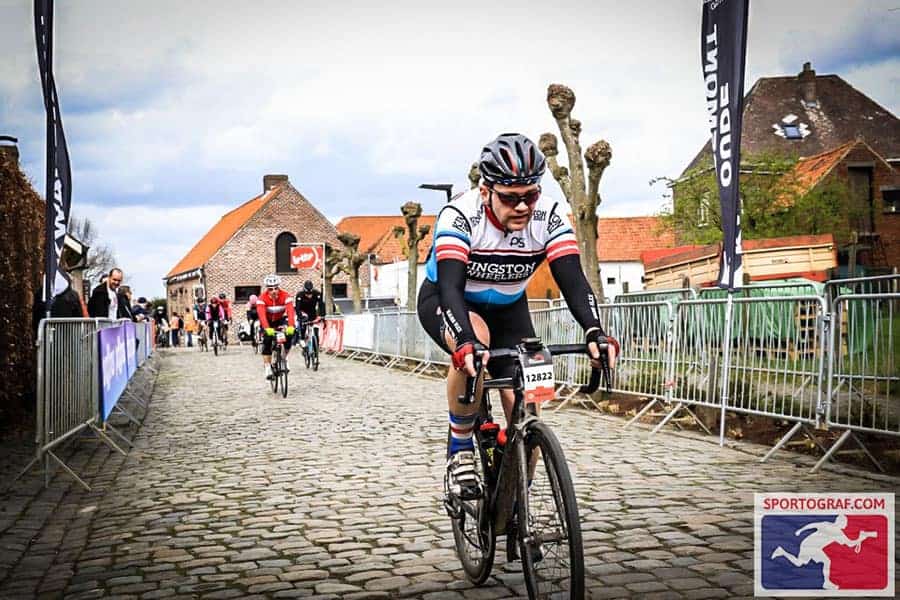 The sportive starts pretty gently along the riverside and out towards the North of town. After 2km of cobbles we hit the first cobbled climb, the Molenberg.  My abiding memory is Max passing me on the bend, in the big ring and out of the saddle, before realising his mistake and rapidly dropping down to the 34. Youthful exuberance!  Another cobbled section later, we hit the first feed zone after which the real fun started. Another 5 climbs followed, Leberg, Berendries, Ten Bosse, the Valkenberg and Eikenberg.  The route then returned to town for yet another feed stop and part two!
The second half of the route takes in the famous climbs, starting with the Koppenberg. The TV screen in the feed zone showed the approach and it was clear we would probably be walking up the steepest section.  Sure enough, as we approached the climb, we could see a mass of riders.  I had to dismount for the steepest section, but a friendly rider gave me a helpful shove as I remounted and I was able to ride to the top. The longest cobbled section, 2km, then followed before we conquered Steenbeekdries, the Taienberg (Boonen’s favourite climb), Kaperj and Kanarienberg.
After yet another feed zone, we were onto the last 5 climbs of the day. I agreed to meet Max at the top of the Kruisberg and hit the climb nice and hard. I waited for Max at the top then moved onto the Cote du Hotond, another climb that is seemingly innocuous, but often quite decisive in the pro race. Then it was Karnemelkbeekstraat before the Oude Kwaremont and Paterberg.

On paper, the Oude Kwaremont doesn’t seem that daunting. Just under 2.5 kms, 12% max and a 6% average gradient.  However, most riders are visibly fatigued having ridden 50, 120, 180 or 210 odd kms previously. The entire climb is cobbled, including a particularly ropey section just after the halfway mark. The Paterberg is a different beast altogether; 400 metres, 12.9% average and a 21% max gradient. What many people don’t realise is that the climb is only 30 years old. A local farmer decided to pave his hill with cobbles because he wanted the Tour of Flanders to pass his house!  The organisers of the race duly obliged and in 1993 the Paterberg was classified as a protected monument. It’s a great climb. You approach it after a winding descent, but the climb is hidden from view as you approach. A sharp right hander and it’s suddenly upon you. Perfectly smooth cobbles but a unrelenting gradient and then it’s over and you’re greeted by the sign telling you it’s only 16km to the finish.  Having seen the look on Max’s face at the top of the Oude Kwaremont and sheer number of people shuffling up the Paterberg, I assumed Max wouldn’t make it up without pushing. So I pulled off to the side of the road for a sneaky rest. Big mistake! He was less than 20 seconds behind me and pushed straight on. I had to quickly remount and chase him down. I then gave him the good news that he had another 10 miles before we would get to town. How his face dropped!
After around 40 minutes punctuated by the sound of deep section carbon wheels and a moaning teenager we crossed the finish line, stopped for a quick photo opportunity with Gill Thom, rode through the centre of Oudenaarde and to the sportive finish line.  We handed back our timing chips and headed back into town to meet the KWCC contingent camped out at a bar called, rather helpfully, ‘The Pub’.
The rest of the weekend was spent, as you can probably guess, drinking beer and eating. After a delightful Sunday morning stroll to the local bakery, we rode into town for the start of the women’s race, rode back, pausing to watch the men pass on their way to the ‘bergs.  It was then back to the cottage, lunch, pack and head back to Calais.