On the 22nd of April Phil Barella, Mark Bennett, Ben Speller, Alex Reid, Aidan Culhane, Adam Bidwell and TY Hsia made the relatively short journey over to Belgium to take on the Liège-Bastogne-Liège sportive. This year’s route totalled 273 km with 4500 m of climbing making it a tough day out by anyone’s standards. A special mention goes to Phil who was riding Liège for the fourth time and Mark who was adding La Doyenne after completing Paris-Roubaix and Flanders earlier in the month year.

The preceding week was spent anxiously checking the steadily declining weather forecast and stockpiling energy gels (seriously, Ben took a small warehouse worth). Eventually Friday rolled around and at 4:30 am then bikes were expertly packed into the van and we were off. The journey down to Folkestone was pretty straightforward save for the enforced emergency stop to close the van doors which had somehow managed to open themselves, threatening to unleash a few grand of carbon onto the motorway. With the danger averted, the rest of the journey was spent dishing out the usual fantastic (awful) chat you tend to get when you stick a load of cyclists in a confined space. At about 2pm we pulled into Liège and signed on. It was only at this point that I had a proper look at the route map. Nothing but hills for 273 km and the weather was set to be a stinker. Seeking a bit of Dutch courage we headed out to the local supermarket and packed the van with fine Belgian beer. That evening we loaded up on questionable pasta and a couple of beers before heading back to the apartment to watch Ben unload about 15 SIS gels into a bidon – proper pro!

The next morning we were met with the exact crappy weather that had been forecast: hoying it down and about 5 degrees. Luckily there was a tail wind down to Bastogne – which offered the greyest of silver linings – and at least the back half of the day was set to be pretty decent. We met up with Adam “Turbo Diesel” Bidwell on the start line and at about 7am we rolled out of Liège. As I’d feared there wasn’t much messing about before we were into a pretty decent pace – certainly much quicker than I’d have liked for a 170 mile ride! The route down to Bastogne was pretty quick and despite having a fair amount of climbing wasn’t too taxing. The climbs are a lot gentler than the show stoppers in the final half and the roads are as immaculate as the scenery. Mark and Ben were straight up to the front of the group from the gun, putting in some huge turns and towing a big group up the early climbs. Taking some sage advice for our Capitaine de Route (TY) to “let the suckers do the work!”, I decided to sit in until a bit later on. Aidan and Phil sensibly decided to set off at a much steadier pace and kept a lid on it for the opening kilometres.

By the time we hit the first feed stop at 80-90 km in things were pretty miserable. Ben, who somehow was wearing shorts, no shoe covers and only a gilet was visibly shaking but still in high spirits! My hands were completely redundant by this point, so much so that I had to shift with my palm. We’d unfortunately lost Mark by then, who having put in some big turns, had dropped off the pace a bit. We’d covered the first section at a pretty decent pace (~31 km/h) and were more than ready for some waffles and budget wine gums. With hypothermia on the horizon (only slightly joking) we set off for the final stretch before making the turn at Bastogne.

I remember this part of the ride being pretty enjoyable. The roads started kicking up a bit and me, TY, Adam and Ben got into a nice rhythm. We were straight into a pretty fierce headwind after making the turn at Bastogne, but fortunately the weather was starting to perk up. The stretch between 100 – 180 km went pretty well as we started taking in some of the famous intermediate climbs like le Côte de Saint Roche and Chemin des Quartiers. There was a pretty funny moment around 150 km where Adam, Ben and I lost TY only for us to bump into him about 30 km up the road. Turns out we’d stopped at a feed station and he’d been chasing like hell for the past hour! After a bit of ribbing (and a lot of swearing from TY) we were back at it. The next hour was pretty quick due some tidy chain-ganging with a bunch of deceptively quick Belgian gents. I only speak a bit of French, but I knew exactly what they were saying every time an over enthusiastic triathlete surged off the front and disrupted the line! Luckily for the poor lad Phil B was further down the road.

It’s in the last 100 km that you really hit the big climbs and they really do come thick and fast.

Most of these climbs are between 1 – 2 km and average anywhere from 8 to 12%. There’s really far too many to mention, but the highlights for me have got to be the brutal Ferme Libert (1.2 km at 12%) and La Redoute (1.5 km at 10%). All of these are made even worse by the multitude of uncategorized humps and drags that really sap the legs. By this point the group started to fragment as everyone settled into their own pace and started thinking of the beers at burgers waiting at the finish line.

By the 220 km mark we knew we’d cracked it. Adam and I had opened up a bit of gap to Ben before regrouping with him at the final feed stop. TY was only a few minutes further down the road and I’m sure he would have been with us had he not stopped to remonstrate with a nutter who had done his best to drive into him! Keen to enjoy the experience we took the last 30 km pretty steady knowing we had a pretty decent time in the bank (that and our legs were pretty “bien cuit”). One by one we rolled into Liege and headed straight for the beer tent, followed by the hot-dog stand, followed by the beer tent, followed by the…

All in all everyone had a cracker. Mark pulled it back it together and get himself round in a good time after a tough start (shame the same can’t be said for his Garmin!). Phil was super unfortunate and had to bail out early following some seat post issues (he still did 250+ km and most of the climbing however). The biggest cheer was definitely reserved for Aidan, who despite not feeling too hot initially finished strongly with a big smile on his face. The next 36 hours was spent eating and drinking relentlessly under the semi-legit illusion of “replenishing the burned calories” (I’m still using that excuse now by the way). On the Sunday of the pro race we rolled over to La Côte de Saint Roche to watch the doomed breakaway — who had 13 minutes over the peloton by that point — ease up the climb ahead of the chasing pack. After that it was back to Calais and onto Kingston.

Massive thanks have to go to Ben, for organising the trip and doing the majority of the driving. Cheers mate! Similar thanks to Mark for organised the amazing accommodation and Phil for helping out with the driving and navigation duties. The biggest thank you, however, has to go to Aidan for the pint of Carling he bought me at Folkestone services (I was really getting sick of all that delicious Belgian beer anyway) and of course to TY for cracking me up relentlessly all weekend and ripping past me at 80 km/h on all the descents (obviously because he’s so aero…). 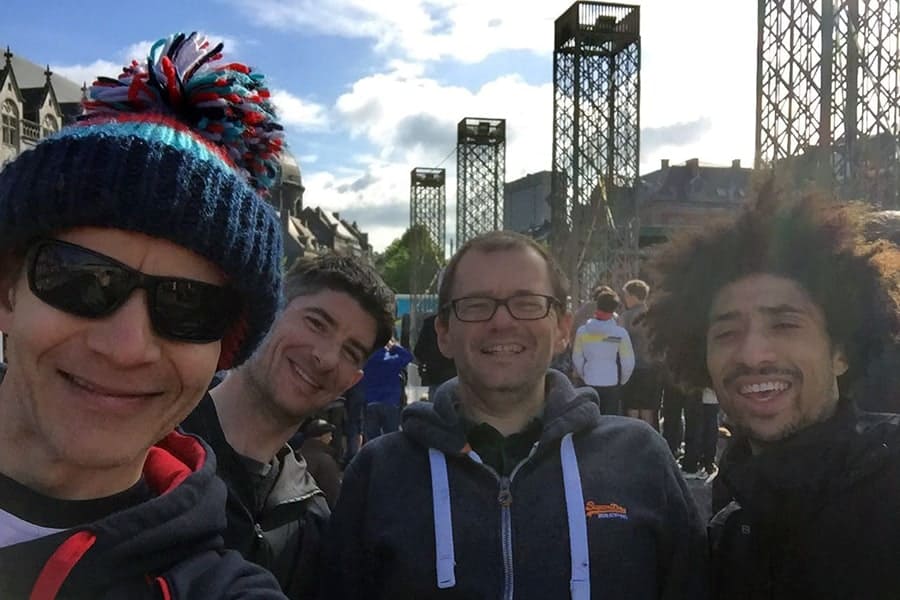 Aidan Culhane:
It was with a certain amount of trepidation that I set off to Folkstone en route to Liege. Due to a late withdrawal, there was a place on the Wheelers trip and I was lucky enough to bag that place where I was hoping to do the middle-distance event. “You can’t do the middle distance” Phil joked “you’d be the on
ly one not doing the long route”. No pressure then. Ben made light work of the driving, not an easy task in a van with no back window and the industrial metropolis of Liège came into view conveniently at lunchtime. After registering for the event, we found our excellent accommodation a few miles outside of the city, nestled in a forested area (good work Mark), unpacked and went for some carb loading before our early start the next morning. “I hope it’s not raining tomorrow. Or cold. Or windy” I thought.

Next morning… cold. And wet. And windy too. Eating a decent breakfast at such an early start was a bit of a struggle but I knew I had a long day ahead of me. Our merry bunch set off at about 6.30 from the exhibition hall and we were soon on our way out of Liège in a giant peloton. The constant drizzle wasn’t great for morale but I was looking forward to experiencing the route that is considered a tough day out even for the pros and the Doyenne’s route certainly was rolling, passing through some pretty forests along the way. I can’t remember the exact mileage but it felt like I was just warming up when suddenly I was approaching the turn off for the medium route. Decision time! Long route it is then. After the second food stop (complete with waffles, waffles and more waffles) it was straight into a nasty headwind and with the rain still coming down, two Belgian lads latched onto my wheel for some shelter – with no interest in working as a group, the cheeky buggers! ‘Workers, not shirkers’ came to mind. But along the route, the rain eased and fortunately the second half of the route was much more pleasant with the sun making a welcome appearance. Good timing as I knew that the route’s steeper climbs were mostly in the second half.

Some of the climbs were mentally cruel – appearing to flatten out after a horribly steep section, only for a bend in the road to be concealing another 20% section. With the pros racing the next day, campervans grew more numerous as the route progressed and some fans enjoying a liquid lunch gave some much needed shouts of encouragement on the iconic Côte de La Redoute. I must admit, the last 40 km were tough going after a long day in the saddle and I don’t think I broke any speed records on the last of the three timed climbs, the Cote de Saint-Nicolas. Crossing the finish line really did feel like an achievement – we did 8 km more than the lazy pros! The next day we watched the sign on and race start (along with a tribute to poor Michele Scarponi who died the previous day after a traffic collision whilst training) and got to watch the race pass on the iconic and narrow street climb, the Côte de Saint-Roch. After that is was back to Calais for the short Eurotunnel journey back. Thanks to the other Wheelers on the trip, Mark, Ben, Phil, Alex and TY for a fantastic weekend.

P.S. I am finally able to eat waffles again after an enforced overdose.