The time trialling scene is the backbone of many British cycling clubs and it’s no different with us.

The club hosts 3 open events; the Gill Jessop Memorial Sporting 14, a popular season opener for many local time triallists, and a double header open 10 with a road bike event (part of the national road bike TT series) followed by a TT event. We also run a series of evening club events in conjunction with Kingston Phoenix on Wednesdays from April through to August.

We have many members competing in club events as well as open events, both locally and far afield. Our racers include first timers on road bikes though to national medal winners. Whatever your level and ambitions, you’ll find club members eager to offer support and advice. 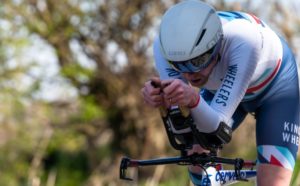 Our annual Sporting 14 time trial is a traditional early season opener for many competitors in the South East. The event is named after our former club president Gil Jessop. It's run on the hilly GS/292A sporting course, starting in Hungry…