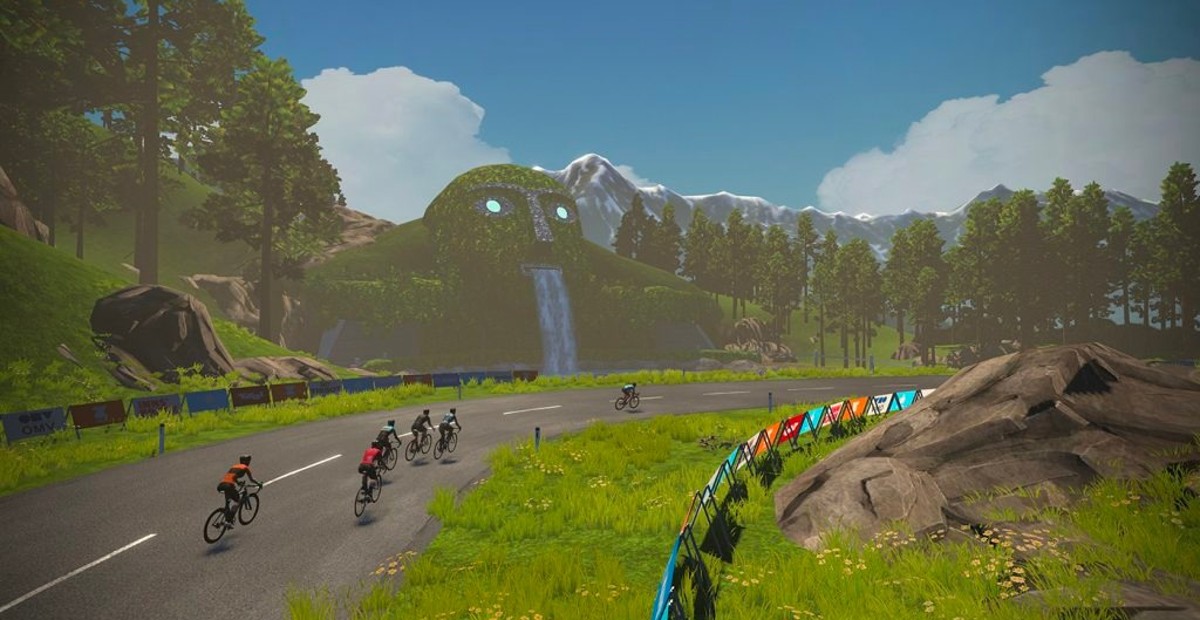 The virtual cycling scene is a big part of club life for many Wheelers. For the last couple of years we’ve been participating en masse in the Tour de Zwift, with race director Tom Herbert recording the GC standings and organising prizes with help from partners such as Le Col. A-rider Tom Kennett tells us how the race unfolded…

Every January, tens of thousands of Zwift riders take to their turbo trainers to take part in the Tour de Zwift. Taking place over 8 stages over a month-long period, the main in-game reward is in the form of virtually unlocking a jersey. Each stage has three routes – a long, medium and short ride.

For the last couple of years, KWCC-er Tom Herbert has pulled together his best impression of Christian Prudhomme and designed a KWCC-specific Tour de Zwift taking in a specific route from each stage. This year, the stages ran Monday through Thursday (i.e. you can complete it within that time window), and then Friday through Sunday. Tom’s route meant that the weekday stages were short and punchy, while the longer “GC Days” were, in theory, held for the weekends.

Within KWCC, there are different prizes and different self-selecting categories. We had prizes for “A” riders, “B” riders, “C/D” riders and Women riders, based on the traditional parameters of Zwift racing.

In the 2021 edition, your writer went into the penultimate stage a couple of seconds behind Judah Rand with a chance of the overall win and KOM prize. He came out of the final stage a distant second and absolutely nowhere in the KOM. I also came out of it having massively overtrained. Ahead of 2022, I spent some quality time with Training Peaks and Google Sheets, pulling together a plan designed to make the most of the month, while ensuring I came out of it sufficiently recovered and ready for the season ahead.

Stage One was held on the roads of the new Japanese themed world. As would become a regular theme through the series, the most populous stage was also the most popular with KWCC-ers. This is due to what has been termed “blob gains” – the bigger the group, the faster the speed, and therefore the faster your overall time.

At 13km it was punchy, but with two dirt climbs (which affect road bikes very differently in-game) held danger. Indeed, at one point myself and Rupert GW attempted to break clear of the pack, and very nearly held on, getting caught just before the line by the main group, where Henrik Persson took the jersey with most A riders finishing in the same time.

The second stage was in Innsbruck, taking in a lap of the 2018 World Championship course, which includes a 7km climb. After a hard start I drove a hard tempo on the climb, and although Tom Herbert put in a huge effort to cling on, in the end I broke away with five non-KWCC riders, and finished 40 seconds clear of Rupert GW and further ahead of Henrik, taking the jersey and the stage win. Or so I thought… later in the day, Alice Lethbridge, who had taken part in a slower first stage, dominated her group and finished a few seconds faster than me, taking a deserved stage win in the process.

A short stage three ended up with a similar outcome to the first, with most riders on the same time. Stage Four was potentially decisive, with 27km on the Jungle Roads of Watopia. These are sapping and best taken with the in-game MTB. Personally, at the time I was coming down with a cold, and the KWCC ride took me to places I’ve not been for a long time, with an all time 60 minute Heart Rate record. After an attritional stage full of surges, Rupert GW ended up taking the KWCC stage win, and a couple of seconds back on me.

The fifth stage saw another short, flat effort; I had taken an extra couple of days to recover, and fortuitously was in a more motivated ride than Rupert GW, gaining back the seconds I lost in the Jungle.

The 41km-long sixth stage however really upped the ante, with Rupert riding the biggest and most populous stage (frustratingly this thing called ‘work’ had gotten in the way for me…), whereas I stuck to what I hoped would be a more motivated KWCC-filled stage. In the end I was spectacularly wrong, and ended up conceding the jersey and over 90 seconds to Rupert GW. However, with the last two stages in theory suiting someone like myself (i.e. tiny and climbey), all was not lost.

The penultimate showdown was, in the end, between myself, Rupert and a fair few other As in Yorkshire. Once again I went deeper than I had gone for a long time, and put in a huge effort on one of the climbs while Rupert was badly positioned, dropping him in the process, and working with podium-contender John Borton to take back those 90 seconds plus nearly another minute. Success! The level of joy I received from this was hugely disproportionate to the actual scale of the achievement, but it was the closest I’ll ever get to Froome in 2018. Or so I thought…

As mentioned earlier, the stages run over multiple days. KWCC GC riders can ride as many times as they want, with the fastest time the one that counts. Therefore, there’s nothing to stop multiple attempts, and so Rupert dusted himself down and went back into the ring. This time, he paced himself, and ended up with a time almost identical to mine. This meant he went into the final stage on the hilly Zwift World Championship’s course with a lead of almost a minute.

I’d love to say that this ends with a Mano a Mano showdown for the ages, complete with Carlton Kirby commentary and drama. The reality was far duller; due to scheduling conflicts, we had to ride different stages, and for the second time I found myself with an all-time highest one hour HR. In the end, my time was nearly two minutes quicker than Rupert’s, and that was that. My coronation moment happened just as some pasta was boiling over.

All of this aside, I cannot recommend the event enough. While I’m only talking about the A race, the B, C/D and Women’s races all held even more drama, with leads constantly changing and, more importantly, great and supportive chatter happening through the main KWCC Zwift WhatsApp group. A special mention must go to race director Tom Herbert, who through his efforts and smart spreadsheeting manages to keep upwards of 60 people motivated through the dark days and nights of January.