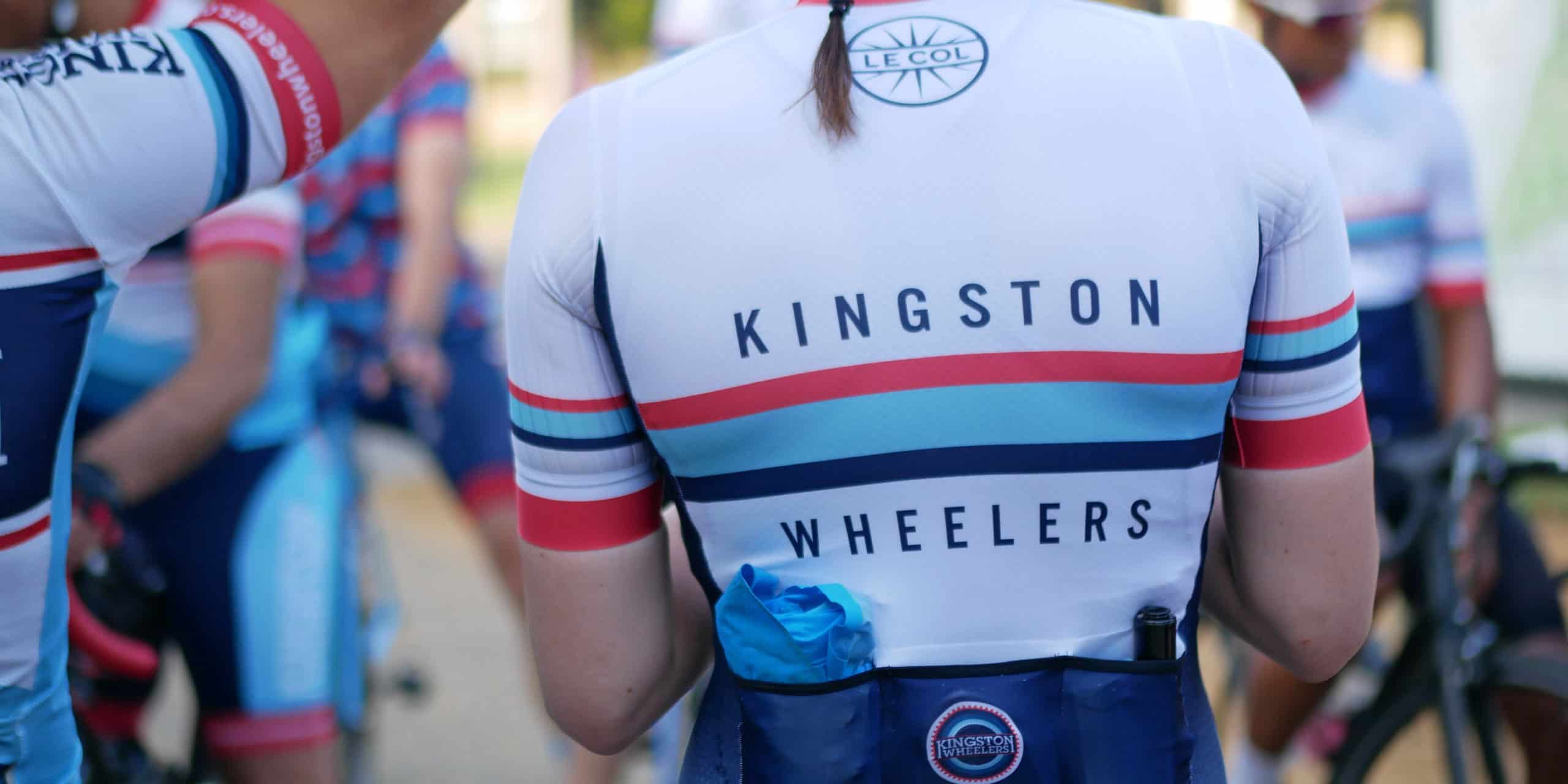 Following the launch of our new kit with Le Col in 2019, our in-house kit historian Gafyn MacMillan gives us a rundown of the history from the Sixties through to the present day.

For most of its long history, the Kingston Wheelers has been a small club, quite different from the huge membership it boasts today. As a consequence, there have been periods where it wasn’t practical to evolve the jersey’s design, or even to have kit produced at all.  For example, during the early to mid-1980s the club didn’t order any kit, so newer members would simply turn up for Sunday club runs in whatever blue top they might own. Since 1985, club kit has again been a consistent and important part of the Kingston Wheelers CC, as this feature illustrates. So, while for many years now we have enjoyed modern, high-quality, well designed club kit – either due to demand or financial sensibility, this hasn’t always been the case. Nor is it true that our club kit has always been comfortable and well fitting.

Since the end of the last century the KWCC kit design has changed much more rapidly, and as the club’s membership started to swell from 2004, so did the desire for great kit.

Dating back at least as far as 1960, the club kit consisted of black shorts and a pale blue jersey with a wide white band across the chest, with white sleeves ending in a darker blue cuff. This was almost certainly the first design after the club’s reformation in 1953. (Sadly, nothing is known of the KWCC kit from the club’s first period of 1924-39/40).

Some of these jerseys, especially the later ones, had Kingston Wheelers branded across the white band in black lettering.  Most versions had no text and no logos but during the earlier part of this era there was the option for members to sew on a cotton KWCC badge on to the jersey.

Consistent with the period, our club kit was wool based which used to stretch significantly in heavy rain “jerseys down to the knees and shorts almost to our ankles” – but the kit reshaped when dry.

The pale blue and white sections of the jersey were stitched together from separate cuts of material, while the woollen shorts included a hard chamois that required cream to be applied to soften before riding.  For a time during the Sixties, in the days before cycling helmets, the club kit range included a black beret, which echoed the then fashion in cycling.

This long-established kit was replaced in 1976, but the old design was referenced in 2016 when an unofficial retro club jersey was produced, in merino wool, largely for members with a keen interest in classic steel bikes. Two other unofficial club jerseys have been designed by and for subsections of the Wheelers, namely for our mountain bike and cyclo-cross riders, in 2013 and 2014 respectively.

The Seventies re-design consisted of a kingfisher blue jersey with white & darker blue trim down the side of the body of the jersey, again with black shorts.  Variants of the design also had the white and deeper blue stripes on both the collar and sleeves. When the club kit was revived in 1985, it was almost identical to the design introduced in ’76, but a new supplier was selected: Romar Sport.  Across this period the jersey fabrics transitioned from wool, to nylon, to acrylic, to polyester.

After four decades of kit produced against just two designs, 1998 saw the introduction of yellow to the club kit for the first time in what was a very contentious & divisive design – judge for yourself in the gallery below! A number of design proposals were put forward in late 1997, and as you will see from this image of one of the contenders, the KWCC kit at the time could have been even more radical. A revision to the ’98 design, produced by TAL in 2002, introduced ‘Kingston Wheelers’ across the shoulders for the first time, making the club name more visible during races.  The shoulder/sleeve lettering remained a constant until the Le Col jersey re-design available from 2019.

The yellow logo’d kit was relatively short-lived however, as 2004 brought about another complete re-design and introduced a new colour, red, to the club’s clothing. More recently the colour teal was added but has since disappeared. 2003/04 witnessed a period of significant change in the club, in addition to completely new kit made by a more professional clothing provider, the club attained sponsorship for the first time – initially with Evans Cycles, Telford and OTM blazon across our jerseys under headline sponsors Cluttons. This allowed members to purchase KWCC kit at a reduced price.

Another significant club kit change arrived as the 1990s began: shorts were designed to match the jerseys.  Previously shorts had always been plain black, sometimes, from the 1970s with the club name displayed in white iron-on lettering. This was not only due to the kit printing limitations of the time, but it was regulation to race in black shorts.

As can be seen by the collection of jersey photos, the KWCC kit is a regularly evolving design; with changes ranging from the subtle tweaks, often in the materials used, that result from our quite frequent switching of clothing manufacturers; and kit refreshes comprising of a few evolutionary modifications; to full back-to-the-drawing-board re-designs of ’76, ’98, ’04 and ‘19.  One aspect of the kit that has remained a constant throughout the club’s history is that it has been designed by members for our members.

This Kingston Wheelers CC online gallery of club jerseys, is a pictorial step thru time from 1985 to the present club kit design.  Included are all known and available editions, but as other variants are uncovered, when boxes long forgotten about in attics are opened, and of course when new designs are produced – it is intended to catalogue them here. 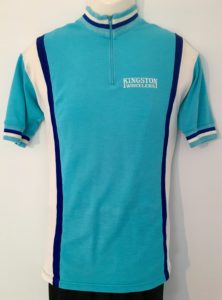 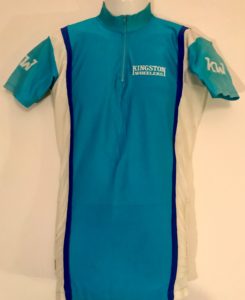 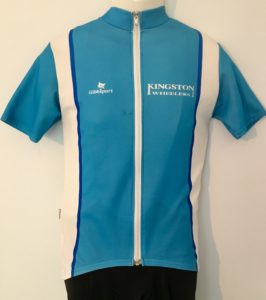 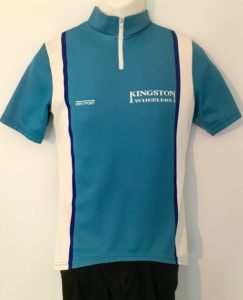 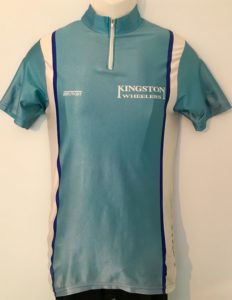 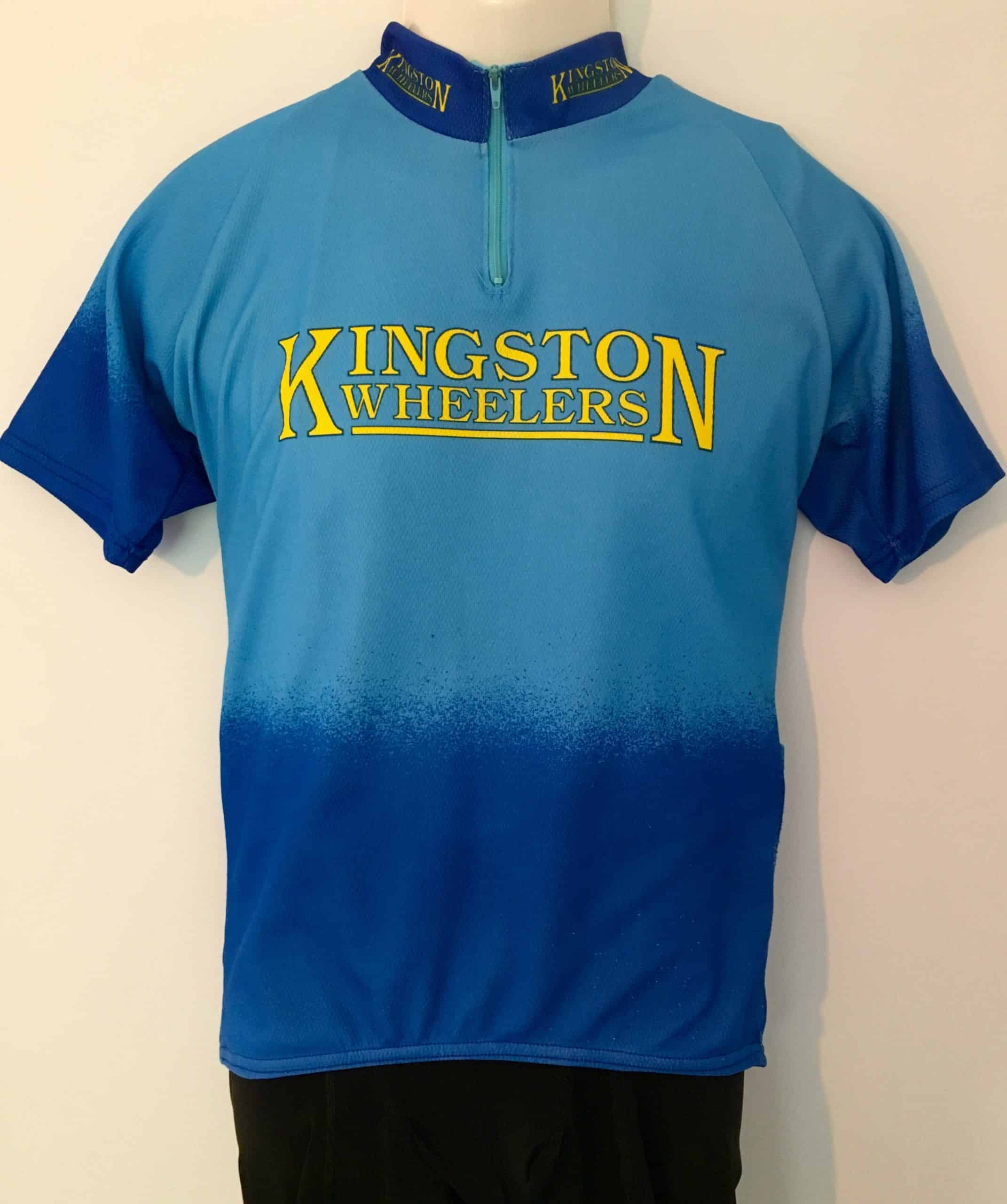 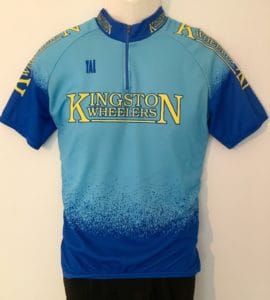 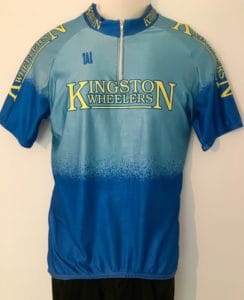 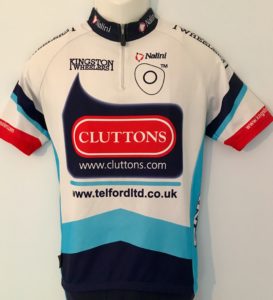 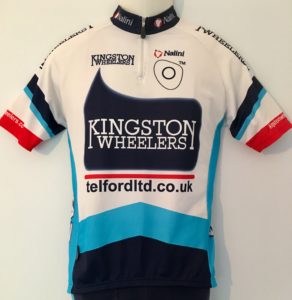 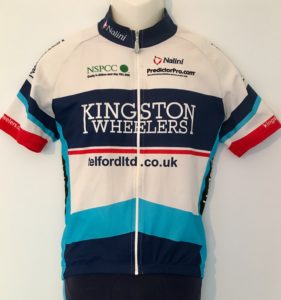 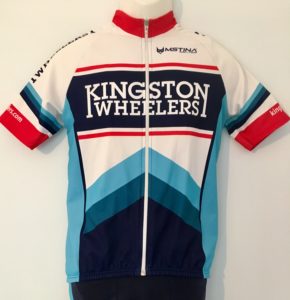 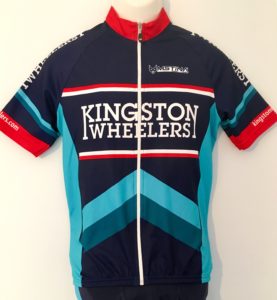 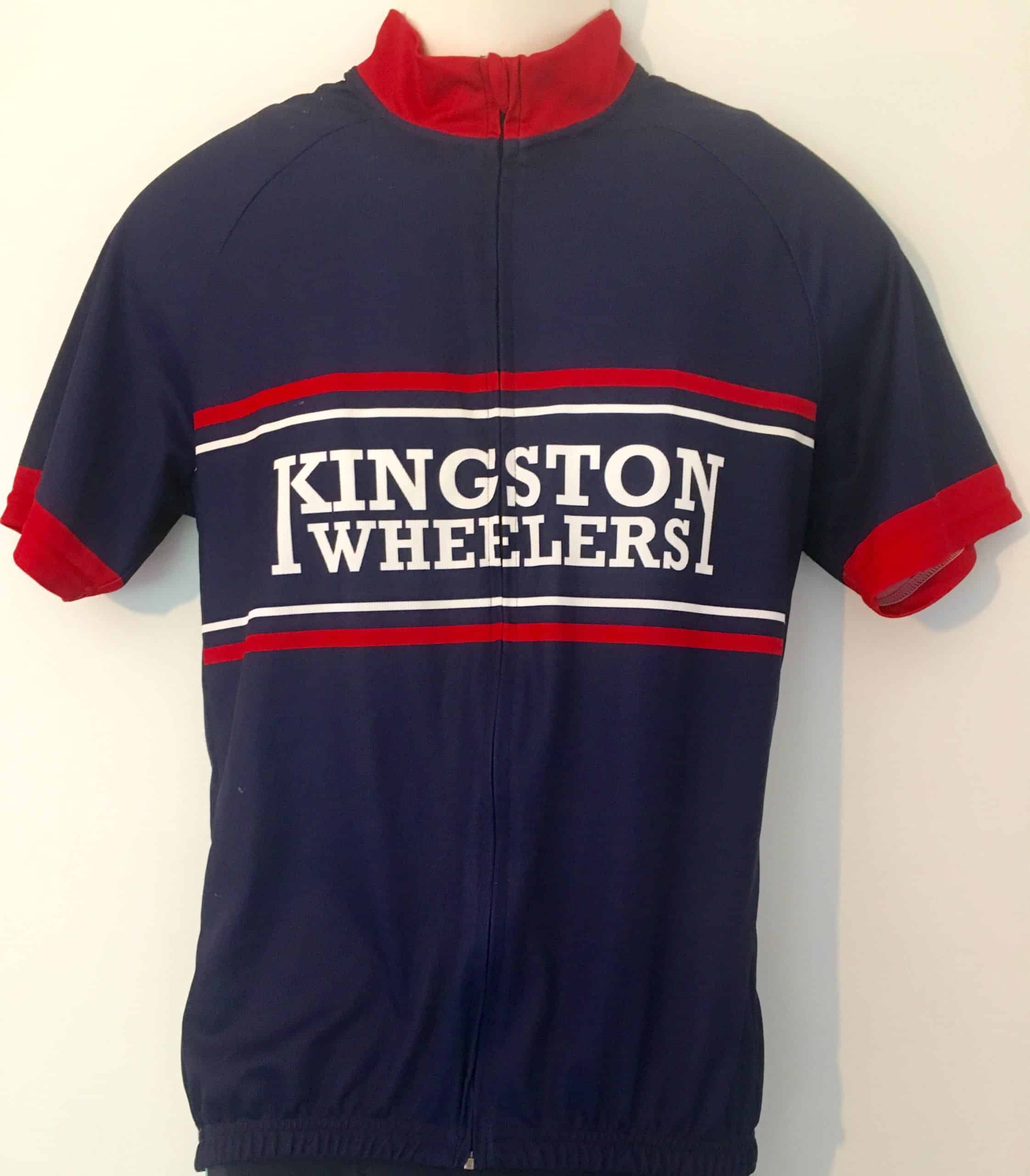 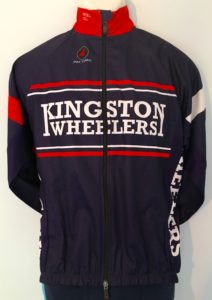 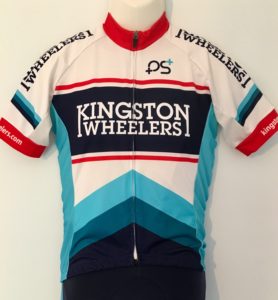 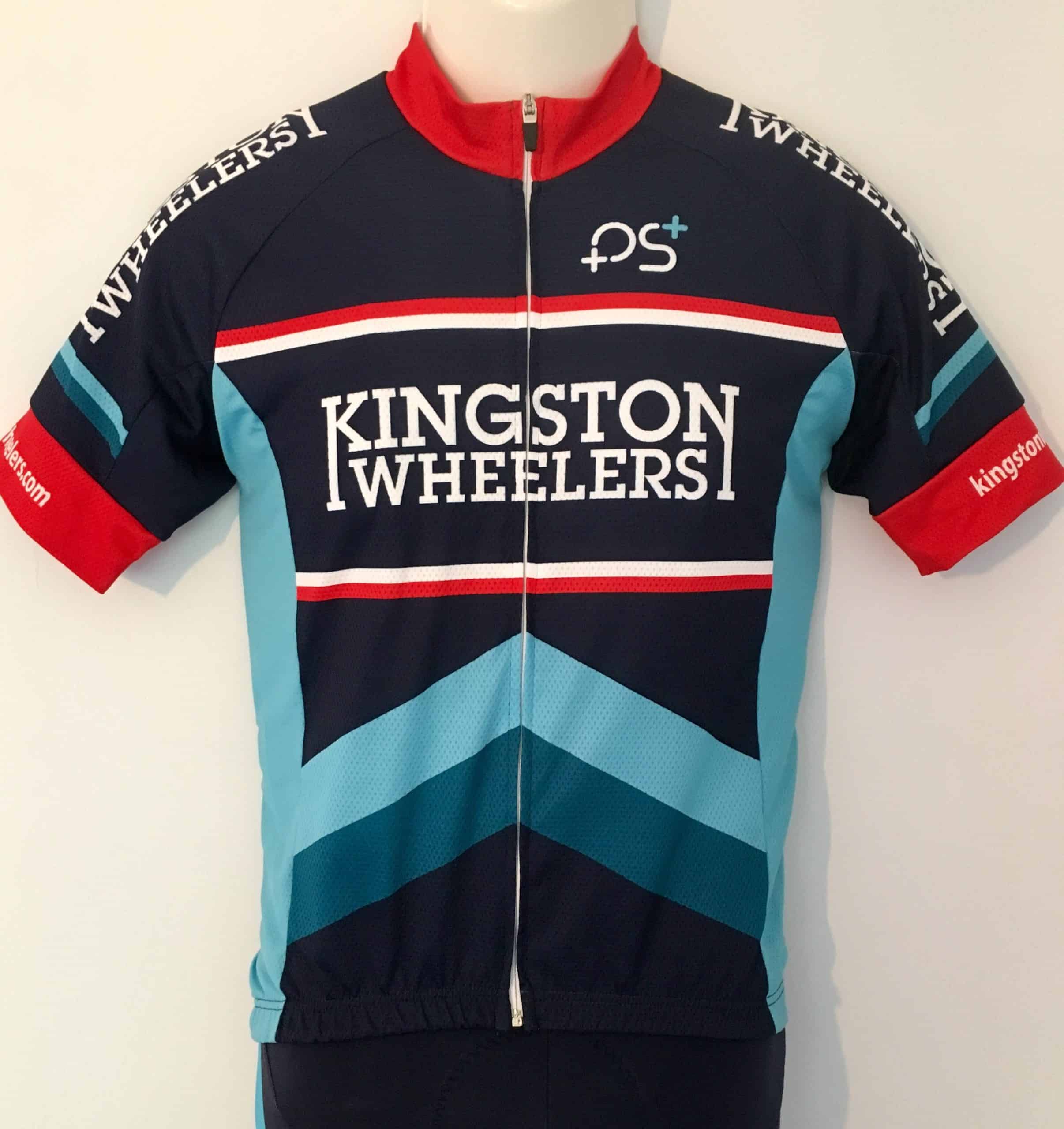 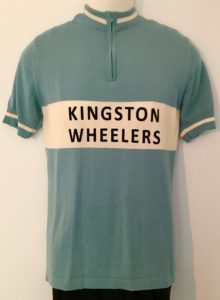 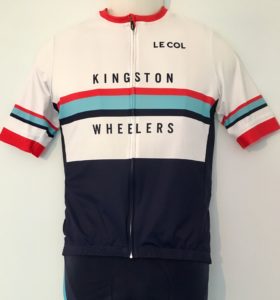