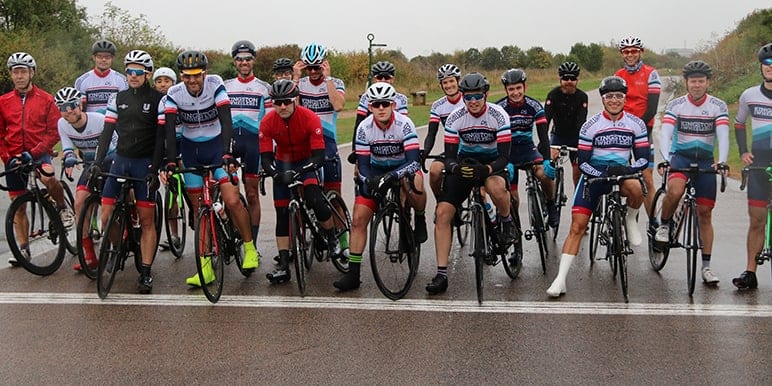 On Saturday 22nd September we held our annual Club Championships, an end of season crit race that decides the best of Kingston across several categories.

Assistant organiser Phil Barella reports back on the action…

The weather forecast showed we’d be in for our first wet races, and Andrew decided we’d run them clockwise for the first time though in the same format as last time (which was a great success).

I was due to race the 2/3/4 but frankly the weather and a mild stomach issue meant it wasn’t wise for me to do so! So I stepped up and ran the three races in terms of getting everyone up and running and recording results.

In theory this year looked like it might produce something different. The ladies had a new pair of contenders with Esme and Alex being new to the champs but not to racing, and the newer riders having Greg and Joe who are both decent climbers and the two powerhouses Mike and Andrew offering a bit of brute force!

The main event was to be handicapped in the usual 2/3/4 with 4ths off first then a minute gap between the other racers in 3rd then 2nd cats. Our 2nd cats were favourites with several riders able to influence the result though not all in the 2nd cat ranks. Declan was going for his 3rd straight win, and had several wins this season already. Mark Aldred had a successful summer, with a strong win at Crystal palace in an E12 race, Andy had been successful in a stage race and had made his way up to 2nd cat rapidly. There were many others that could feature as well. But on to the races…

The Go Race / Women’s race was observed by a few marshals and spectators including a few club stalwarts. Like every year we have a ride along marshall or two, and this year the women followed the guys along round the course until the race split, and then both groups upped the tempo. During this time one of the guys, Sam went on a brief solo attack, then fell apart and got lapped by the groups after falling off the back of them. Hopefully he will be back next year. In the meantime the ladies had a smaller bunch, and though Helen attacked early, Esme and Alison went past, and Esme held out for the win. The Go Race was a bit of a cagey affair but the finish was interesting with Mike and Greg going away from Joe and the rest. Greg won, just, by about a tyres width. During these races Myself and Mark tried egging the folks racing on to get them to speed up a little. They didn’t until the end… but that’s the nature of these races.

The main event kicked off soon after with a smaller field than last year and the level of strength in our second cats meant that the 4ths and 3rds would have to do something special to stay away. Sure enough after the second prime it was all pretty much together, though a few casualties of the weather meant that the tyres on the bikes were even more prone to fail and we had a fair few people drop out.

The race was punctuated by attacks, most notably from Alex Reid and then Andy Martin during the middle part of the race. Alex was away for a couple of laps, Andy a few more until he punctured, he was going well up and till then and had a noticeable gap. A shame. Declan was having to attempt to close gaps as repeatedly riders went off the front. Pete had a go and sat up looking for someone to share the work, it was all very cagey, yet the pressure was constant. The other second and stronger 3rds were effectively attempting to work the rest over.

Once Andy was out the attacks increased in frequency but lessened in effectiveness. The 4ths to a man were finding this tough and slowly, the elastic began to stretch then ping as people dug deep and then fell apart. By the end there was fewer than 10 people in the front group and from that the final selection hit the final bend. The nature of the circuit meant that those that could genuinely sprint did well and the bunch kick brought through a top 5 of Declan, Lynton, Jason, Alex, and Mark, with Declan emerging the winner by a much reduced gap compared to last year. Jason being top 3rd cat.

As an outsider looking in the race looked incredibly tough, so for everyone that finished deserves respect, and those that took part deserve a fair bit of credit.

In terms of other awards Damien took the points award for winning 2 primes and featuring near the sharp end for most of the race.

Here are the views of some of the other racers. 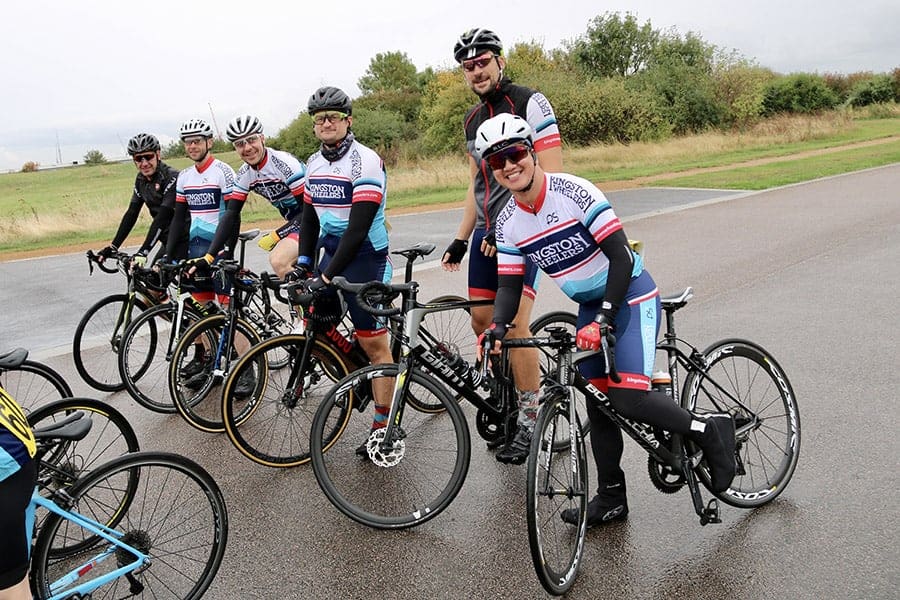 Greg (winner of the Go Race)
It was cold and wet. We lined up at the start, teeth chattering, ready to do battle. From the off it was clear that none of us in the Go-race had a clue what we were doing. We pootled around for a while behind the ladies wondering what the hell to do next. Don’t recall who it was that took the lead but eventually a few of us moved in front and kicked the pace up above 25 km/h.

We continued on for a while with Joe (Lawrence), Mike (Chivers) and myself taking most of the turns. Andy (Allen) had set out his stall early, he was sitting in and had no intention of taking a turn – fair enough. Neil (Meadows) popped up for a turn now and again but was keeping a pretty low-profile overall. Sam (Fawdry) had raced the first few laps but was now nowhere to be seen – a victim of the furious pace. Andy Davis was riding with us as marshal, clearly impressed by some of the skills on display.

We flew over the line each lap to shouts of “c’mon let’s see some effort” and “you’re supposed to be racing” – both valid points. Andy D must’ve had a word in Joe and Mike’s ear because all of a sudden they were off… myself and Andy Allen quickly closed the gap and the race was on. There was about fifteen minutes remaining, we once again barrelled down the home straight – I’d decided to sit at the back for a while, conserve a bit of energy and try something soon.

Andy D was cruising to our left and said “c’mon, sprint finishes are boring!” to which I said “I don’t have a sprint!” and he replied “so attack on the hill”. So I did, gave it a dig, had a bash, hung out in front for a lap before realising that my five second gap wasn’t increasing. The peloton was working together to reel me back in. I cursed them and sat back in the group.

The final lap came (signalled by Phil waving his arms). Neil saw his opportunity and unleashed an explosive attack up the ‘hill’ – he was gone, eight seconds maybe, I dug in and sprinted off after him, the others weren’t far behind. We managed to get back on terms and before I knew it Mike was tearing past me, taking the lead onto the home straight. It was now or never – I launched out of Mike’s slipstream and got my head down, out of the saddle momentarily before realising my technique was non-existent and plonking my arse straight back down again. We were neck and neck all the way to the line, I’d seen racers on TV throwing their bike over the line so thought I’d give that a shot. It seemed to work! and I bagged the win by the narrowest of narrow margins. A tough day on the track indeed… 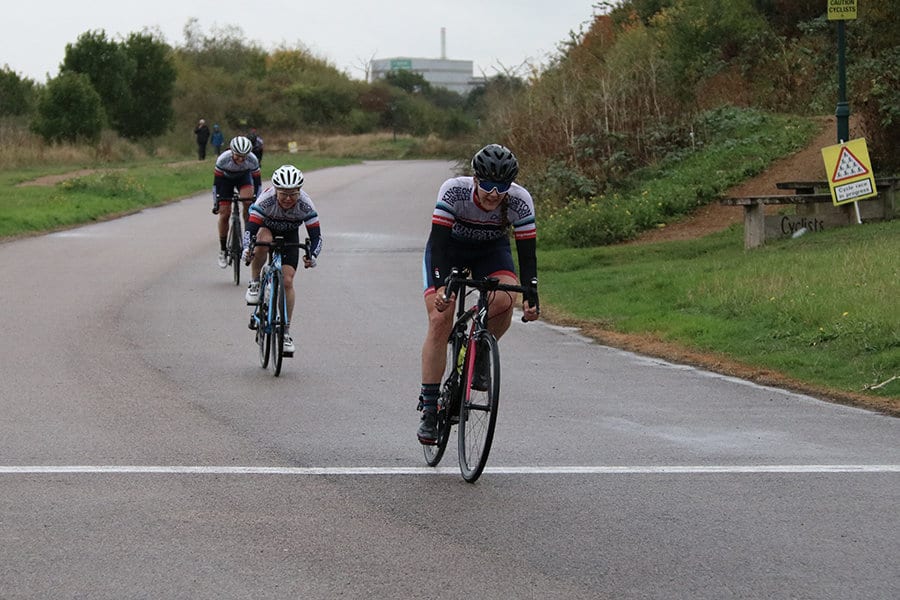 Esme (winner of the Women’s Race)
Every time I’ve raced at Hillingdon it has been pouring with rain. This tradition wasn’t about to be broken for the Kingston Wheelers Club Champs! Despite the weather warnings four Wheeler women lined up at the start line, a little soggy but raring to go. After trying to barter with Andy over the length of the women
’s race (he said 10 minutes wasn’t really fair), we were off. For the first 30 minutes the of the race the Go Race and Women rode together before splitting with 5 laps to go. After the split, it was on. Hillingdon is a good circuit for a breakaway so the thought of trying to ride away crossed my mind but I really wanted it to come down to a sprint finish. I like the finish there and we didn’t have a huge headwind to contend with. Helen had other ideas. With a lap to go she caught us all off guard and put the hammer down. We had to work hard to bring her back in. We caught her just before the final bend and I sat in before launching into a sprint with 200m to go.

It was a great race, even in horrible conditions, and it was really wonderful to ride with a great bunch of women. Thanks to all who organised and cheered us on. 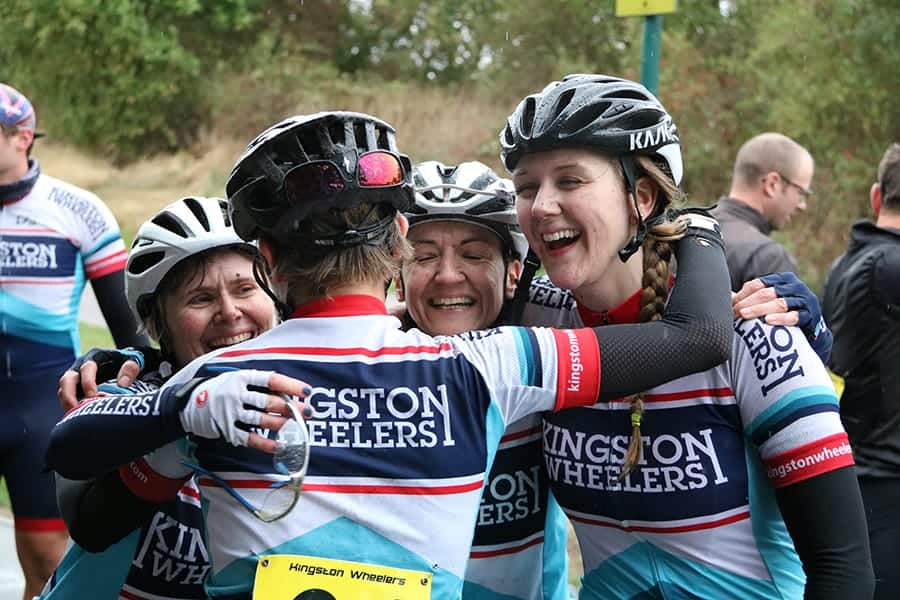 Declan (winner for the 3rd year of the main event)
There had been much anticipation to the 2018 Wheelers club champs. A lot of hype, much baiting and a whole lot of taunting in the lead up to the event. I was entered the race as the defending champion, a likely contender again and the one with the most to lose.

I took to the start line intending to put up a gallant battle and prepared for a barrage of attacks and counters. I knew this could break me and so did they. A few moves came and went and I was able to chase down most of them with little to zero assistance. The race ebbed and flowed, with attacks being tough but manageable. Alex had to be chased down, as did Mark and Linton. Pete had a go too.

When Andy went with 20 minutes to go, I missed the wheel and within a lap he had a significant gap, by the time I wanted to go a ping across the gap a full lap later, I knew I wouldn’t make it and feared that was it.
However, I kept on the pedals and kept the gap steady, only for Andy to bow out with a puncture a couple of laps later.There is little doubt in my mind that he would have got to the line solo but it wasn’t to be for him.
I fully expected the peloton to then start throwing the moves and counter moves but the biblical conditions didn’t inspire confidence in anyone.

Thankfully nothing got away and the final few laps were calm – probably the time the guys should have attacked me hardest – but it played into my hands and was a drag race to the line. 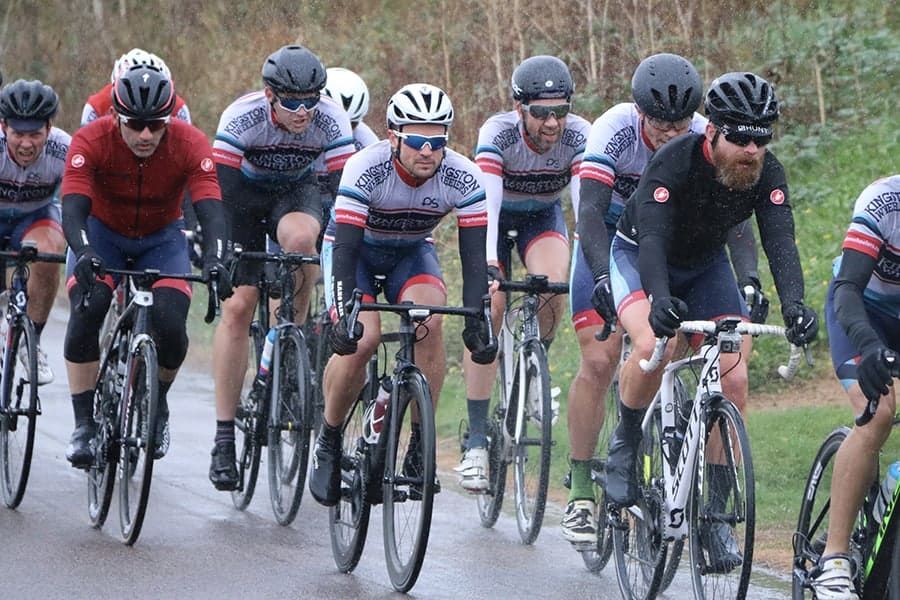