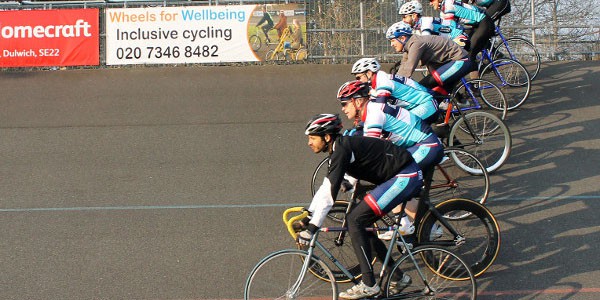 Last Saturday saw the return of the club’s annual track day at Herne Hill Velodrome. I took part for the first time last year, my first experience riding the track and was keen to do it again (unfinished business with a couple of fellow Wheelers in the scratch races!). After stopping off for a cappuccino at one of my favourite cafes in London, the Blackbird Bakery in Herne Hill, I rocked up at the velodrome at 2pm to meet up with the rest of the Wheelers – 22 of us in total. Most Wheelers had seen a track but for some this was the first time on a fixed geared bike. After slipping around in toe straps last year I brought my own pedals this time, no excuses for my foot slipping out during a race this time! A couple of the guys brought their own bikes, but on the most part we were using the Fuji bikes owned by the velodrome.
Once we were all setup we started off doing slow laps of the track to get used to riding fixed. Even though I’ve previously ridden fixed gear on my commuter it’s a very different experience on the track and takes a bit of getting used to. The advice from one of the British Cycling coaches was ‘don’t stop peddling’ otherwise you’ll be paying a visit to the doctors, dentist and lawyer all conveniently located together down the road.
Apparently roadies will often try to sit up as they cross the line in a race and forget they can’t freewheel.
Throughout the afternoon we tried different training and drills, including through and off, then moving onto more sophisticated training like ‘over and under’ where a rider at the end of the line has to slalom their way up the line shouting ‘over’ or ‘under’ as they pass the next rider. Like two cricket teams is a massive whirlpool, the brave 22 were soon circulating around the track with confidence. Another drill ominously called ‘stacking’ had us riding in groups of 7 in a perfectly matched line, with the lowest rider peeling off round the back and joining the at the top of the banking each lap. Towards the end of the afternoon the coaches gave us a few races including a giant team pursuit and ‘Aussie’ elimination in which we were set off a few seconds apart and overtaken riders had to drop out. This was convincingly won by Pete, David and Ryan who looked as they they would have stayed out on the track all night chasing each other – it’s a big old track! 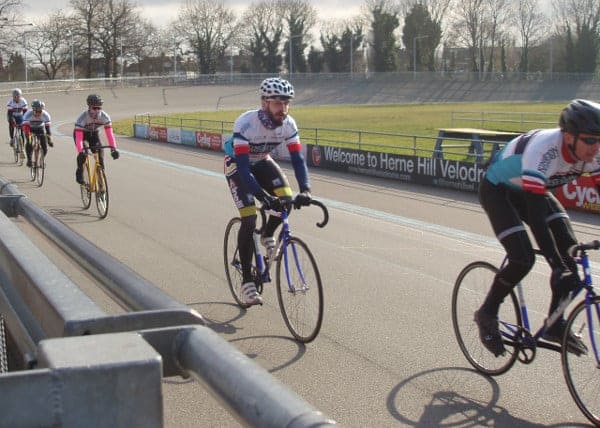 The finale was a mystery number of laps race, which we raced until the coaches decided we’d had enough punishment and put out the lapboard, which Nick D pulled out the big sprint to clinch on the line. It was great to feel the skills we had developed in the drills keeping the race riding fast but safe.
The day wrapped up at 5.30pm and although we’d only done 50km on the track it felt like a pretty solid workout with lots of endurance needed. Really top afternoon and recommend everyone gives it a go, fixed gear on the track is cycling at its purist. Big thanks to Michael Hartrey for organising and all the BC coaches for a their excellent guidance and training. It would be great to see some of the KW ladies there next year as groups can be broken into different capabilities and coached independently. I now just need to start track racing as an excuse to buy a Cinelli Mash…/
Watch out for the Kingston Wheeler Newport Track weekend later in the year and check out the Herne Hill Velodrome website for more details on track accreditation.