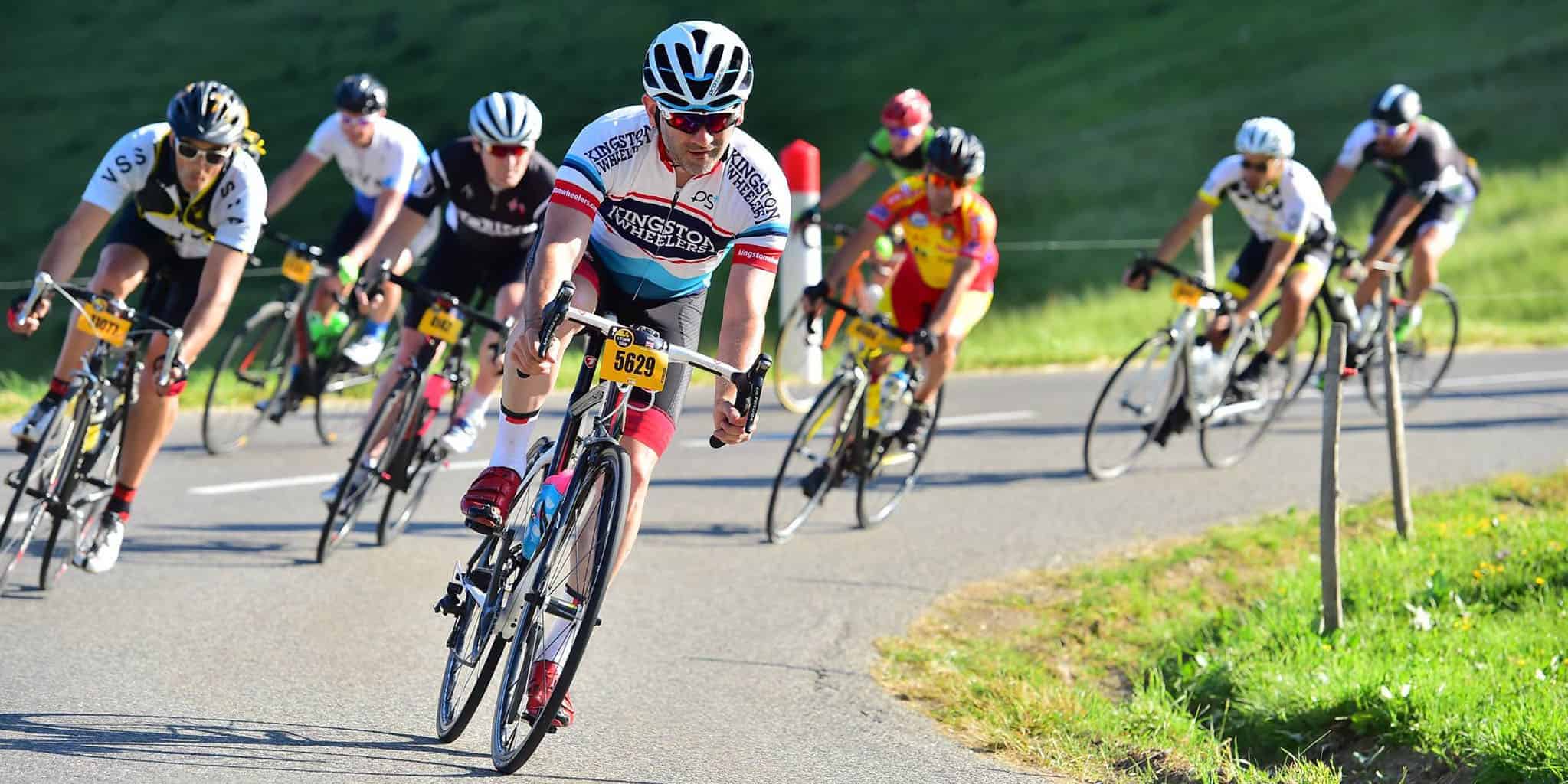 A group of Kingston Wheelers travelled to the Alps for the L’Étape du Tour, one of the hardest European sportives, which took place on Sunday 10th July in 2016. Etape veteran Luca Pallazo and first-timer Anna Kulka report back on a hot day in the mountains.

So I embarked on my third Etape in a row. When looking at the profile in November I thought it was a bit uninspiring and the climbs weren’t exactly ones you’d be instantly aware of, but since this would be my last one for a while I signed up anyway.
I had been reading rumours from French folk on Facebook that the Col de la Ramaz would be taken out due to landslides and road damage and as expected it indeed was a few days before the event so instead of 4000m+ it was only 2800m which is pretty manageable for most on an extended club run. In view of that my plan was to attack this as much as I can as it was only 122km now.
Arriving into Geneva on the Friday was a bit of a headache as it appears most airlines were seemingly unprepared for the onslaught of bike boxes. A few of the group had their bikes delayed and had to wait around for the next flight.
So I arrived at the Chalet in Montriond (just outside of Morzine) and immediately unpacked the bike to take it for a quick spin. When putting on the rear wheel I noticed some paint damage and under closer inspection that the rear seat stay was cracked! To be honest I nearly started crying. I initially thought the damage wasn’t that bad but when tapping carbon with a coin and you hear no noise/a ping on the affected area its not good news, my fears were confirmed a day later when picking up my race number when having it inspected by Trek.
So I had to rush around to get a bike rented, I found a great little shop in Sallanches and managed pick up a fairly decent “Time” bike. It had a compact with a 25 on the back which before the event I thought It would be fine but little did I know how tough it would end up being.
So on the day of the event we set off at around 5am to the start in Megeve which was about an hour away as the five of us had different start times. The weather had been changing constantly and judging by Friday & Saturday, it was going to be hot one again.
There were quite a few Wheelers spread out in different pens but luckily George and his pal were in mine so we stuck together for virtually the whole thing. The first climb was the Col des Aravis which came in at around 20km. It averaged 7% for 6.7km, a fairly tame one to start off with, but with so many on the road it became a bit difficult to navigate through quickly. The descent was navigated fairly easily and the Col de la Colombiere arrived literally 8-10k after the descent off the Aravis, this climb was 11.7km at 5.8%, again a fairly easy climb but by this point the heat was seriously ramping up. On the descent from the Colombiere there were a few nasty spills on the road down so luckily managed to avoid them.
So all that was left was the drag to Joux Plane, the temp was mid 30’s by 1pm so the water stops were very much needed as well as the welcome dousing of water by the locals with their hose pipes out. As I reached the town of Samoens, you hit a left and then a bit of a shock to the system of the steep start ramp of Joux Plane, before the event my focus was more on the descent off it to morzine than the climb so I think I underestimated it slightly. It was 11.6km at 8.5% and this is one of the most feared climbs in the Alps so it was going to be very tough, the temp hit a max of 38 going up and it showed… a lot people were walking half way through and had stop where there was tree cover, I don’t think I have ever trundled up a climb so slowly as the heat was just too much, on the last 4km it ramped up to between 9-10%, being an impatient climber I always want to get up but I just kept it sensible and stayed seated.
I crested Joux Plane which took me an 1hr 20 mins apparently (the KOM is 40mins). I prepared myself for what would turn out to be a very scary descent, during a section through the trees I hit 54mph and I tried to keep the braking where I needed it. On the last 2km the section was literally ruler straight down into morzine in between houses. I heard a loud pop and I initially thought it was another carbon wheel exploding but in fact it was my rear and I skidded off into a front garden and comically fell into a pile of grass just in front of 3 locals who pretty much laughed at me, so I was very thankful it happened where it did. After letting the wheel cool down after 10 minutes I put another tube in but my tyre had a chunk missing out of it so rolled in to the finish on about 15 psi.
So another Etape over and done with. It wasn’t the time I wanted, but I finished which was the main thing. 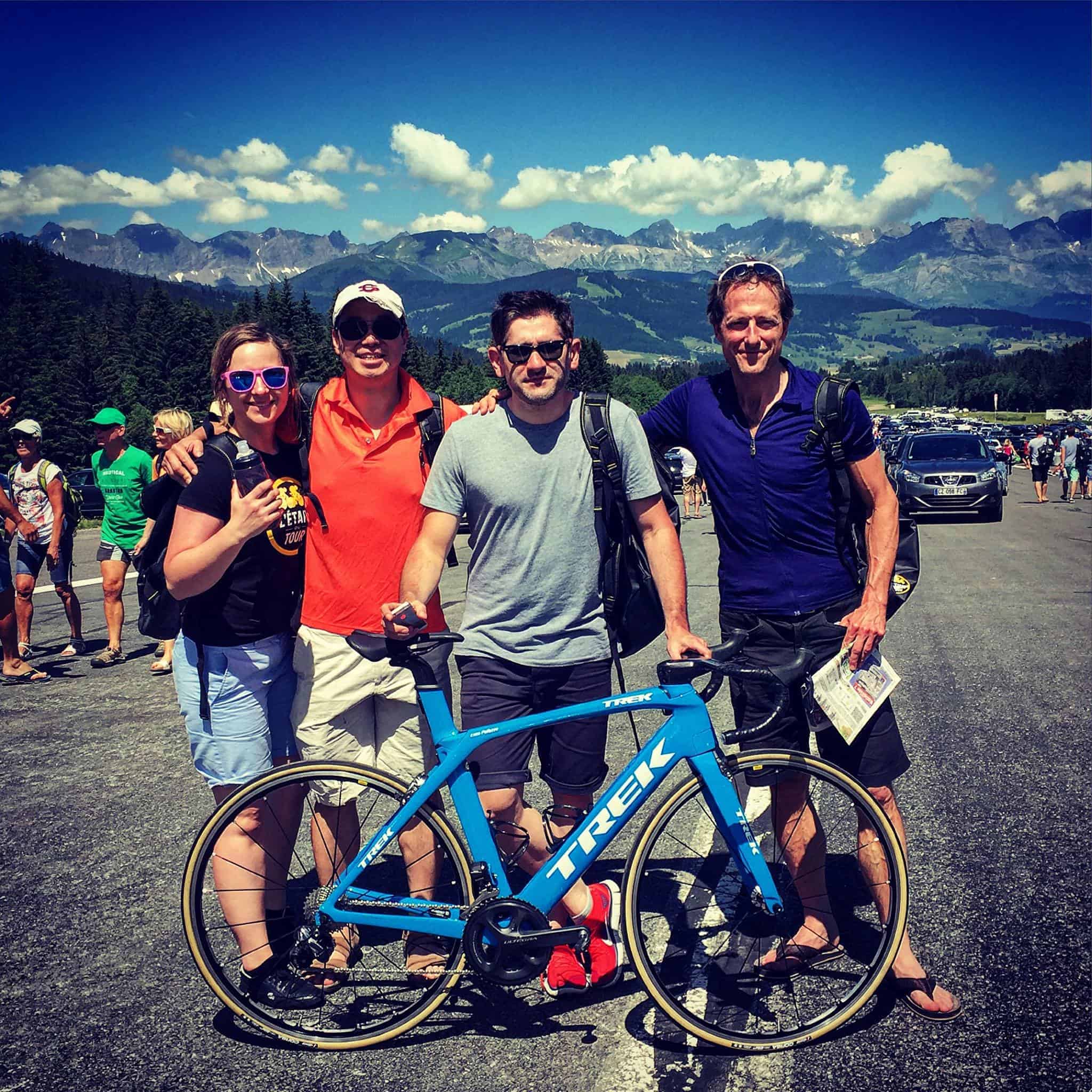 What I’ve learnt and can advise:

1. Get in the first 2 pens – a lot of folk in the 12th 13th pen jumped in mine and I was in the 5th.
2. Go tubeless if possible – I had alu rims and even they couldn’t handle the heat , again this was just pure luck but tubeless even further eliminates the risk of blowing your tube on descents (especially in extreme heat) Saying that a NL jumbo riders tub blew off his rim in the tour as the glue melted!!
3. Travel early and do some of the climbs and if possible go home later.
4. If you’re thinking of staying in the alps I highly recommend Montriond and heading to the lake there, the views and setting are just breathtaking.
5. If anyone hasn’t done the Etape before I recommend it purely to ride on mountainous roads traffic free, which is a big draw for most, however the sheer amount of riders can make it rather unnerving. The support is incredible though so full marks to the French as they really do embrace it even for an amateur event.
A big shout out to TY who organised the accommodation and driving , was a bit of mare with what happened with my bike and getting another sorted, thank you again. Also to Ed “pope” Francis (Paceline) for making the coffee and that pretty amazing time of just over four hours, and big congrats also  to Anna for completing her first Etape too.
A notable mention to Andy Leatherbarrow  too for riding up Joux Plane with no helmet and jersy, the burns were pretty evident the next day… Also for his comments about the brits cheering up the climb “well done you’re doing well,keep going!” and his response “no i’m not doing well, i’m f*****g suffering” …quality! 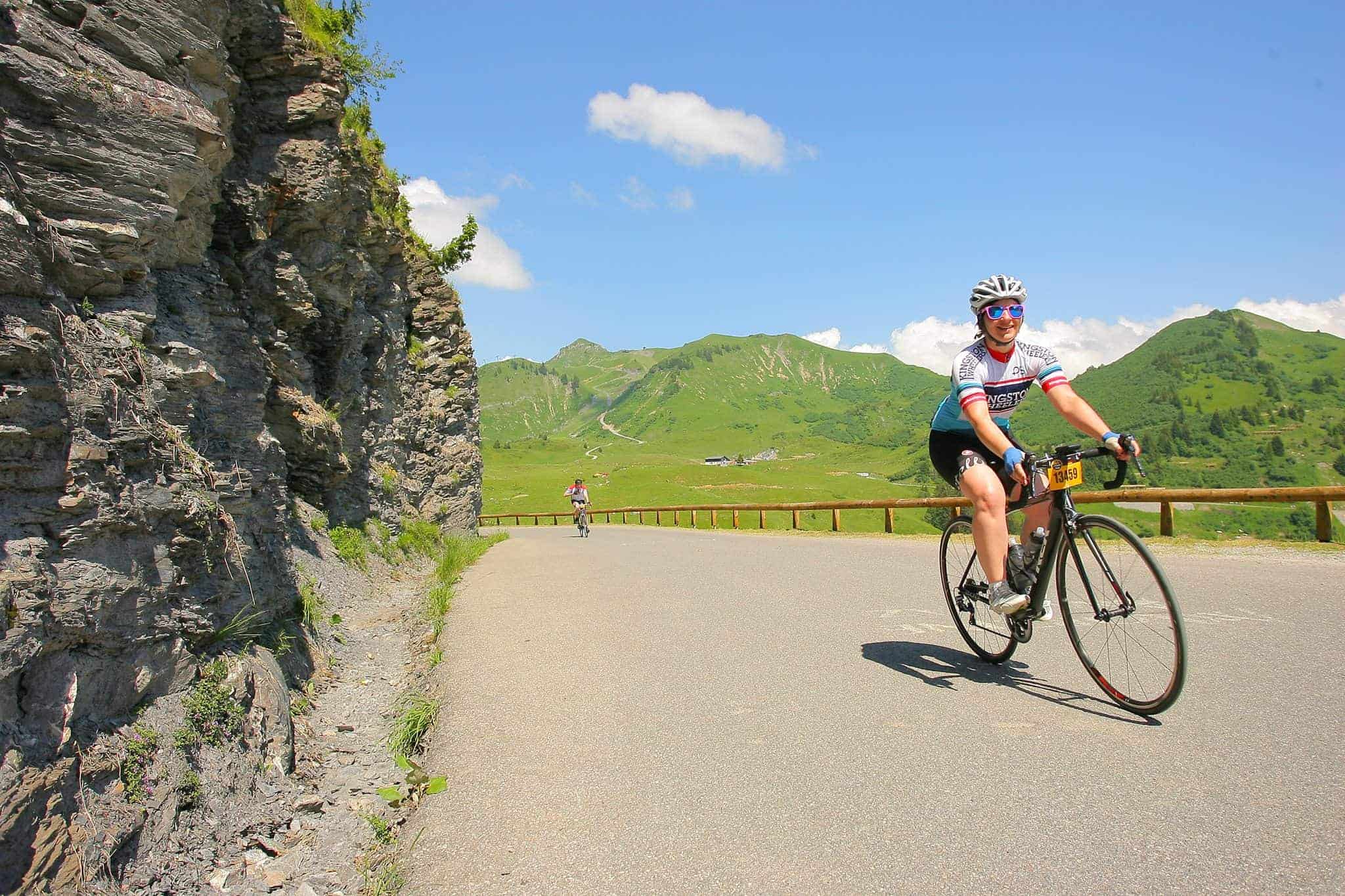